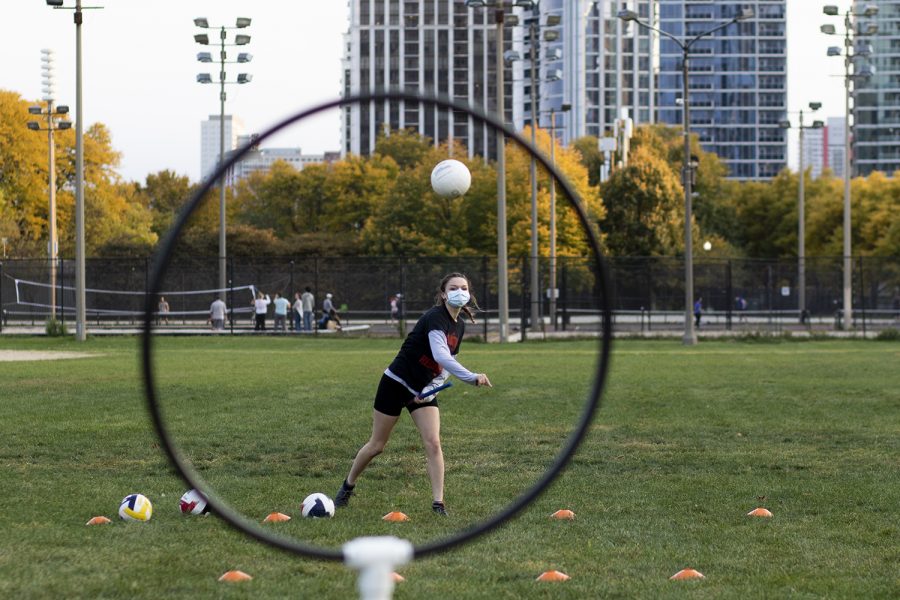 With masks on, shoes tightly laced and sweat beading on their skin, team members run at the blow of a whistle. But, they all maintain their distance and avoid any form of physical contact, sanitizing their hands and equipment every few minutes.

In the past few months, sports have taken a hit amid the pandemic and safety restrictions, including with Columbia’s own Renegades sports teams.

But with the campus reopened and the return of people to its buildings, Renegades members are returning, too. I spent a few days with the quidditch and soccer teams to observe their adaptation to new precautions set by the Columbia Student Athletic Association.

With practice held outdoors, the first few gatherings for these Renegades teams were similar to those of the past, despite the attention paid to cleanliness and staying apart.

Tessa DeHart, senior animation major and the president of the Student Athletic Association, said “anyone that comes to practice is required to wear a mask and no physical contact is allowed” in reference to the quidditch team’s approach to safe play.

When playing together in person, the quidditch team—mostly made up of returning members—came loaded with multiple bottles of hand sanitizer and disinfectant wipes for the equipment being used, including volleyballs and the hooped goals.

DeHart said changing the rules for certain sports has been difficult and that quidditch was one of the sports she worried about the most due to its closeness in nature.

“The nature of the sport is everyone is touching the same ball; everyone is running around, knocking into each other,” DeHart said.

Now, rather than using one ball, there are multiple balls, and they are switched out frequently and cleaned after each use, pausing a drill for a few moments.

The SAA provided specific safety guidelines and precautions for each team to follow that were given to team leaders to be shared with club members.

Rylie Smedley, a senior Cinema Art and Science and Interdisciplinary Documentary double major, said the quidditch team is trying to only do drills that are socially-distanced, because typically in the sport people are allowed to tackle other players.

While attempting to stay competitive and give their all to the sport, the struggle to stay cautious made it evident there is a certain loss of connection when those playing together cannot be physically near one another.

Smedley, who is one of the captains of the quidditch team, said players are not currently required to be tested for the coronavirus, but it is something they are looking to possibly implement in the future. Along with quidditch, the soccer team is also following similar guidelines that include the use of face masks and heavy sanitizer application.

Megan O’Brien, a sophomore technical theatre major and secretary of the soccer team, said the team is unable to hold scrimmages like last year and is focusing on passing and scoring drills that can be done six feet apart from other team members.

DeHart said the Renegades Dance team is also finding new ways to adapt, recently partnering with Kinema Fitness to hold socially-distanced warm-ups and dance routines in-person at the park, over Zoom and on Instagram live.

Despite a number of safety precautions and different methods of practicing, Renegades sports teams are staying active and competitive, she said.

”Renegades sports are focusing on making sure that there is a good balance of digital and in-person events because there are a lot of students that aren’t on campus this semester,” DeHart said.

Documenting sports for the first time during the pandemic was interesting, to say the least, due to the disconnect in how the players interacted. But, each member appears dedicated to bringing back the sport and creating a space that is warm and welcoming.

From my time with the players, I saw their efforts as a reflection of how the Renegades work together to forge inclusive environments for Columbia students.