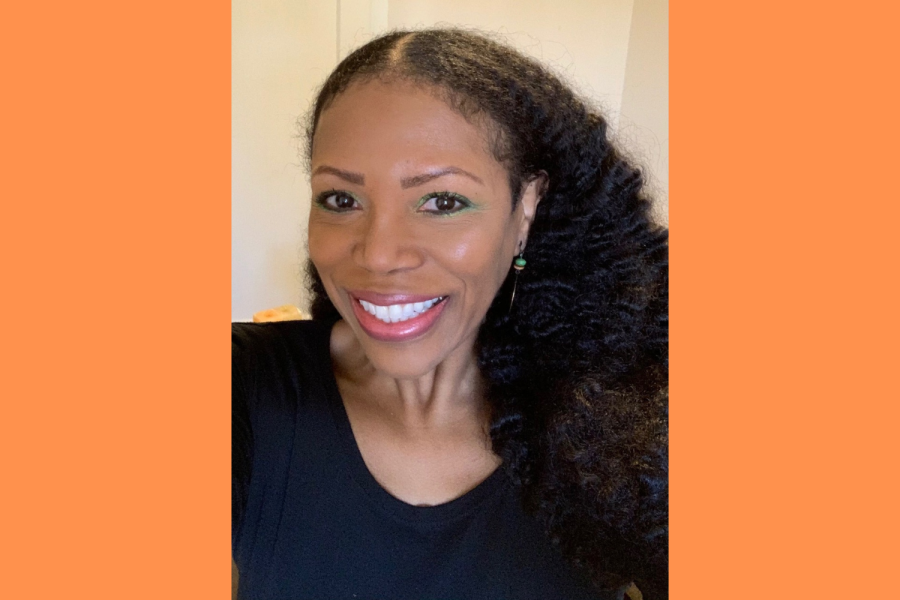 Former Chicago Tribune columnist Dawn Turner will be speaking about her new book on Wednesday, March 23 from 9:30-10:30 a.m. Courtesy of Dawn Turner.

In Dawn Turner’s latest book, “Three Girls from Bronzeville,” the reader is taken through the personal journey of Turner’s experience growing up with her sister Kim and friend Debra, and their shared experiences of facing “race, fate and sisterhood.”

Turner begins this story by describing her early childhood days playing in the summer sun in Bronzeville with Kim and Debra, then walks the reader through how life took the trio down three different routes. Turner also shares her experience growing up in Bronzeville describing it as “a place where all that was good and bad is simultaneously at your fingertips yet a walled-off world away.”

The former Chicago Tribune columnist shared what it was like writing this memoir, published September 2021.

The Chronicle: What pushed you to write “Three Girls from Bronzeville?”

It’s a story that has been pursuing me for decades, probably since I lost my sister. It’s a story of three girls who started out in a very similar place, but wind up taking three dramatically different paths. [Me, Kim and Debra] were coming of age at a time when our parents saw the country and the afterglow of the civil rights movement and they thought it was a movement that would finally offer Black people the opportunities they had been denied [for] generations. They saw their daughters going to college and having great paying jobs and becoming homeowners and partaking of every aspect of the American dream. For Debra and Kim, that dream would prove to be elusive.

Talking about your sister, Kim, was it hard for you to relive some of the more painful parts of your life, especially after the loss of your sister?

Oh, my goodness. Absolutely. This was the most difficult writing project of my life. I thought that I could probably spend a lot of time looking at this from a very detached, objective point of view, and that was clearly impossible. To go back and retrace my steps, and unpack things in emotions and in memories that I had securely put away, was incredibly challenging, but I had an amazing editor in Christine Pride, and she’s just fantastic. I never felt like I was alone in this. I had amazing friends, who I could call from time to time and say “who said that I should do this?” or that I wanted to do this, and I’m so grateful that I did.

You had an established career at the Tribune. What was it like walking away to pursue other types of writing?

I left [the Tribune] right after my Nieman [journalism] fellowship in 2014 at Harvard, and I probably would not have left had I not taken that time off, because during my career at the Tribune, I had not taken more than maybe two or three weeks off at a time, but to take a year off it really helped me to to reimagine my life and what I wanted to do as a writer, as a journalist, as an author, as a human being. It really was a transformative year. It was scary, but it wasn’t so scary that it would be debilitating.

Why is it important for people to know the history of Bronzeville, and how does it relate to some of the issues our city is facing today?

Typically the South Side is painted with one wide brush and one stroke, and that stroke is typically negative. For Chicago and especially Black Chicagoans, it’s important to know Bronzeville because it’s where a lot of our stories begin. Bronzeville is the cradle of the city’s great migration. You have so many people who came of age there from Louis Armstrong to Dr. Daniel Hill Williams, the Black heart surgeon, who is not just the first Black heart surgeon, but the first heart surgeon to perform the first open heart surgery.

When you know the history of a place, even if the physical contours of the place has changed a bit over the years — maybe there is some decay, maybe there are some areas that are more dangerous or scenarios where dreams just can’t flourish. But I think it’s important to know the backbone because that does not change and if you understand how strong that is, then you can build again.

What advice do you have for young creatives who feel they have a story to tell but may not feel others will care?

I think that if [the young creatives] care, that is the most important thing. Once they hone their craft and they understand how to tell that story, we can never let the fear of somebody not caring about something stop us from doing what’s right or telling our story. Writing is a discipline and it means learning how to to master it, as well as maintaining your own voice and point of view. So I would say learn the craft, hone the craft. Read everything. Discipline is incredibly important, so writing everyday, not at the same time, but at a similar time. Just to make sure that muscle continues to be active, is incredibly important.

Make sure that there’s time to just kind of stare at some trees or at the sky. To just mull because writing does not just happen when your fingers are clicking on the keys of your laptop, or your telephone. Writing happens sometimes in the quiet, in the spaces where we just have a moment to think and to wonder.

Turner will be sharing more on her memoir and navigating her life growing up as a writer on Wednesday, March 23, 9:30-10:30 a.m. at the Student Center, 754 S. Wabash Ave. on the fifth floor.