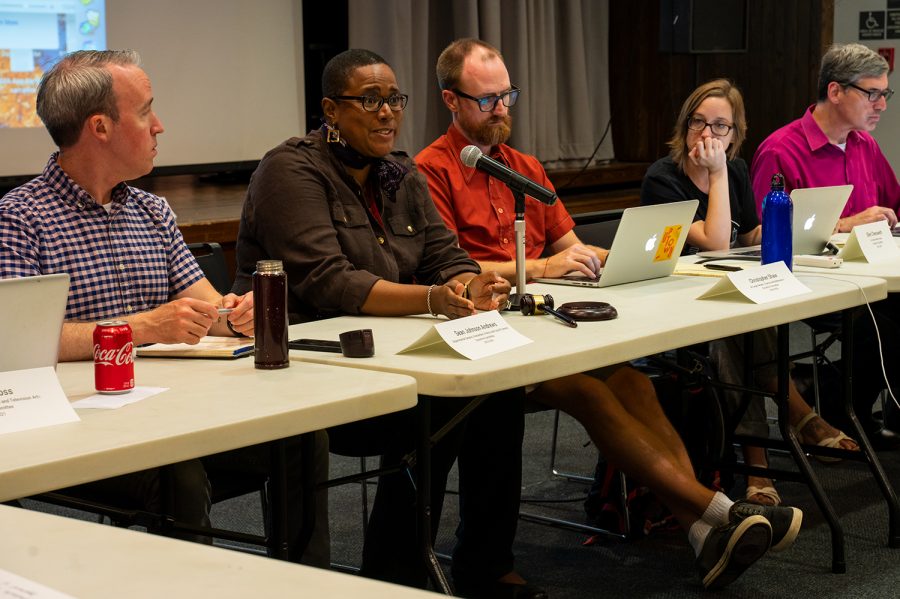 By Lauren Leazenby and Camilla Forte

Faculty senators are weighing whether to make Faculty Senate meetings closed to the public amid concerns over keeping sensitive matters private.

The Faculty Affairs Committee forwarded a request to the executive committee asking for a closed session of the Sept. 13 meeting to discuss the possibility of closing future Faculty Senate meetings, according to Faculty Senate President Sean Johnson Andrews.

“Although we’re all postmodernists now, it appeared kind of meta for us to have a closed-session of the meeting to discuss how you can talk about closed sessions,” Johnson Andrews said to laughs from the senators during the Sept. 13 session held at Stage Two, 618 S. Michigan Ave.

However, per Faculty Senate bylaws, “the meetings, we open to the public except when the executive committee or a majority vote of the Senate elects to close a meeting. Such meetings shall be known as ‘closed sessions.’ An entire meeting or a portion of the meeting can be closed,” Johnson Andrews read to Senators.

Although open to the idea, Johnson Andrews said it can often be helpful to get input from people who attend meetings in the gallery.

Luis Nasser, associate professor in the Science and Mathematics Department and member of the Faculty Affairs Committee, said he did not see a reason for closed meetings.

“We’re not the CIA,” Nasser said. “I would like to think that whatever we say is relevant to everybody who works here. We basically represent our departments.”

David Worrall, professor in the Audio Arts and Acoustics Department and member of the Financial Affairs Committee, said he was concerned about the lack of protocol within the bylaws regarding closed meetings, which could result in closed meetings being called without earlier notice.

“It just changes the character of the meeting,” Worrall said.

The main reason for considering making the meetings closed to anyone except Senate members is to allow Senators to be able to voice their thoughts and concerns without being inhibited by who else is in attendance.

“From what I recall from the conversations that we had, there was some concern about how open we’re able to be in a Faculty Senate meeting,” said Jennifer Sadler, assistant professor in the Business and Entrepreneurship Department and chair of the Faculty Affairs Committee. “It’s not a conversation about ‘How do we close a meeting?’ It’s a conversation about ‘Should certain parts of meetings or some meetings be closed so that we can have more open, frank conversations that some people may or may not feel comfortable having with every single person, in addition to Faculty Senate.”

In the past, administrators such as former Provost Stan Wearden and Vice President of Enrollment Management Michael Joseph have attended meetings, often to address senators. The Columbia Chronicle regularly covers the Faculty Senate’s monthly meetings. With this possible change, neither would be in attendance.

At the Sept. 13 meeting, Senior Vice President and Provost Marcella David was in attendance before the discussion on closed meetings to address Senators in her first semester at the college.

David—who promised to make her remarks quick because it was her birthday—spoke on the top three faculty matters on her plate and offered a revelation about the Student Center.

The top three faculty matters for David include an academic leadership initiative, assessing faculty salaries to understand where there are disparities and curricular program evaluations, she said. One thing that is not a priority for her is past discussions on restructuring departments and schools.

David also shared with the Faculty Senate her surprising revelation: The sushi in the new Student Center is actually good, and reasonably priced. She mentioned this ahead of the Sept. 18 grand opening of the Center.