Presidential debate results in a shouting match, drowning out policies 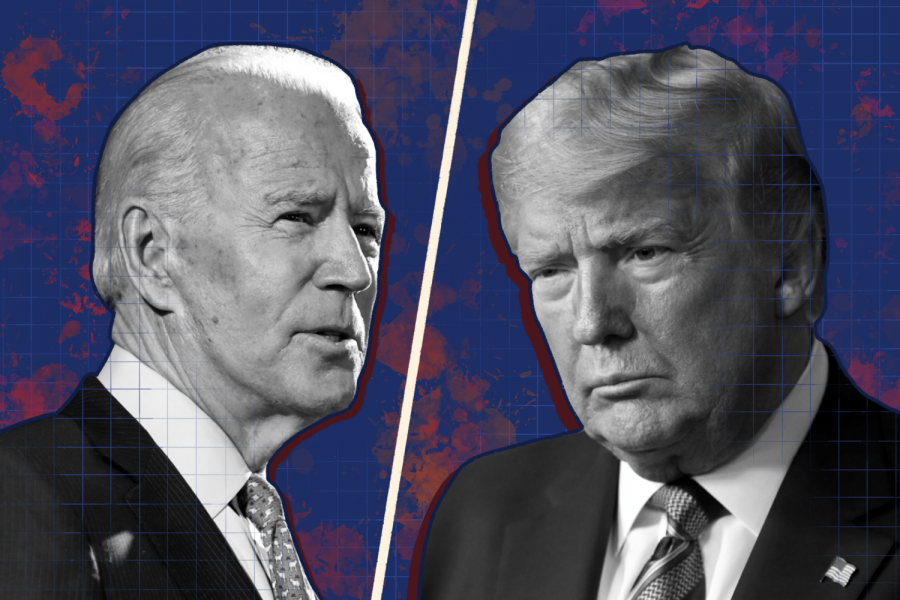 The debate, which took place at Case Western Reserve University in Cleveland, Ohio, on Tuesday, Sept 29, was moderated by Fox News anchor Chris Wallace, who asked the candidates about their records, the Supreme Court, COVID-19, the economy, race and violence in cities and the integrity of the election.

But, while discussing these topics, the candidates often talked over each other, disregarded the moderator’s instructions and even launched personal attacks at one another.

Anna Busalacchi, sophomore public relations major, said she was upset the debate was more about personal jabs than actual policies.

“When Trump kept taking jabs at [Biden’s] son, [Biden] really got angry. You saw a rise in him,” she said. “I wish [Biden] had that same power in his voice when he talks about the policies that applies to the American people.”

Isaiah Moore, a senior double major in television and cultural studies, said the debate was “juvenile” and there was nothing that separated the candidates for undecided liberal and conservative voters.

“Getting into shouting matches isn’t productive,” Moore said. “They need to just answer the questions and let people know what they’re thinking.”

In case it got lost in the noise, here’s how the candidates answered some of the night’s most pressing questions:
Why is your position correct on selecting a Supreme Court nominee in an election year?
Trump nominated Amy Coney Barrett for the Supreme Court following the passing of Justice Ruth Bader Ginsburg. But, Ginsburg’s last wish was that she not be replaced until a new president is elected, according to NPR.

Trump said he was right in his decision to nominate Barrett, a judge on the Chicago-based 7th U.S. Circuit Court of Appeals, because he won the election and “elections have consequences.”

“[Barrett] is going to be as good as anybody who has served on that court,” Trump said. “We won the election, and we have the right to do it.”

Biden said the American people have a right to say who the Supreme Court nominee is through their votes for senators and the president. Because this nomination is taking place as people are casting early and mail-in votes, he said they will not get that chance.

“We should wait and see what the outcome is of this election because that is the only way the American people get to express their view,” Biden said.
Why should Americans trust you more on dealing with the coronavirus?
“[Trump] still hasn’t even acknowledged that he knew how dangerous [COVID-19] was going to be back in February, and he didn’t even tell you,” Biden said.

Biden said because Trump does not have a plan, 40,000 Americans have contracted the coronavirus each day and between 750 to 1,000 people die from it at the same rate.

The former vice president also addressed the financial impact of the pandemic.

“You’ve got to provide these businesses [with] the money to be able to reopen with a PPE, as well as with sanitation they need,” Biden said.

Fauci did say Trump saved lives through his travel restrictions, and some Democratic governors thanked the White House for being responsive early in the pandemic but did so without using the same language Trump repeated, according to USA Today.

The risk for severe illness from the coronavirus does in fact increase with age, with older adults at highest risk, according to CDC. But there is “not enough data to show whether people with diabetes are more likely to [contract the coronavirus] than the general population,” according to the American Diabetes Association.

Trump said Biden wants states to shut down, which will hurt more Americans. Biden said he wants businesses to open, but only if it is safe to do so.
Why should voters trust you more than your opponent to deal with race issues?
While not yet accomplishing equity for every American, Biden said he never “walked away” from trying to achieve it like Trump.

“This is a president who has used everything as a dog whistle to try to generate racist hatred—racist division,” Biden said.

Biden said there is systemic racial injustice in America and although he is in favor of police reform, he said he is opposed to defunding police departments. If elected president, Biden said he will bring together civil rights groups and police officers at the White House to work out a solution so there is transparency and accountability when racial violence happens.

But when Trump had the mic, he refused to condemn white supremacists and militia groups when given the opportunity to by both Biden and Wallace. Instead, Trump answered with: “Proud Boys, stand back and stand by.”

“[Trump’s] own Homeland Security director and FBI director said there is no evidence mail-in ballots are a being manipulated,” Biden said.

Biden encouraged people to visit iwillvote.com to choose how they plan on voting and said poll watchers will ensure people are socially distant. He is confident it will be a fair election and that polling locations will open on time and stay open until all votes are counted, he said.

“Once the winner is declared after all the votes are counted, that will be the end of it,” Biden said. “If it’s me, that’s fine. If it’s not me, I’ll support the outcome.”

Trump said mail-in ballots are going to be a “fraud like no one has ever seen.”

“As far as the ballots are concerned, it’s a disaster,” Trump said. “They’re not equipped to handle it.”

Trump said he is urging his supporters to go in to the polls and watch carefully, and he is counting on the Supreme Court to settle any disputes with ballots.

The second presidential debate will take place Thursday, Oct. 15 at the Adrienne Arsht Center for the Performing Arts in Miami.