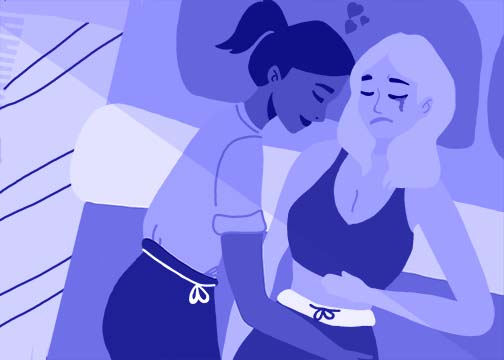 Elizabeth Brase, a sophomore psychology major at Loyola University Chicago, didn’t feel like herself after sex. She was anxious and felt shameful when she did not have full body confidence in bed.

Post-coital dysphoria, also known as PCD, refers to experiencing the feelings of anxiety, depression, irritability and shame after sex.

Brase said she experienced PCD when she wasn’t aware of her own body and her sexual preferences.

“I would be doing things [in bed] in the sense that I wanted to do them because it was going to make my partner happier, not myself,” Brase said.

People with PCD experience it differently, and it can be hard for individuals to describe certain triggers or symptoms, such as past sexual trauma, body dysmorphia issues or not being emotionally available or ready during intercourse.

Alex Fliess, a licensed clinical social worker, therapist and co-owner of the Chicago Center for Sex and Wellbeing, said PCD is related to anxiety, which can be exacerbated during and after sex.

“By suppressing feelings of shame or guilt through sex … it’s similar to putting a Band-Aid on a much larger issue,” Fliess said.

Fliess said the individuals who are most affected by PCD tend to be people who identify as women.

“PCD is definitely more common in women,” said Fliess. “A lot of those feelings can come up for women or people who identify as female … it’s very common for women to have sex and never reach climax, and also very easy for them to fake an orgasm to please their partner.”

Fliess said post-sex depression is more commonly documented in heterosexual relationships, and she suggests reading about both binary genders to understand pleasure points and triggers because they can apply to anyone.

“A body is still a body,” Fliess said. “It doesn’t matter who you’re having sex with, it’s still a body, and you still have the same feelings that you do about your body and about your partner.”

Fliess also said hormone imbalances could play a role in causing PCD, and hormone drops related to sex can last anywhere from a few minutes to several hours.

Oxytocin hormones and endorphins are released during sex which causes benefits to emotional health, but there can be a “dramatic drop” in hormone levels after sex that can lead to a “negative emotional response,” according to Psychology Today.

“Hormone levels drop at the end of sex which can result in PCD,” Fliess said. “If you have any unresolved issues, fears or worries about your relationship, sex can bring them to the forefront of your mind and begin to make you feel overwhelmed.”

Confronting PCD or sexual trauma can involve talking about sexual experiences with your partner, as well as evaluating past experiences or seeking out a sex therapist.

Fliess said breathing and mindfulness exercises such as “the 3-3-3 rule” works to ground one’s thinking and will help a person remain present.

“You name three things you see in front of you, three things you hear and end by moving three parts of your body,” Fliess said. “Always make sure you’re present and in the moment and get in tune, so your head and body are connected by asking yourself, ‘Am I safe?’ ‘What’s happening right now?’ ‘Is there someplace I’d rather be?’ ‘Can my partner do something right now to help make me feel better?’”

Emily Jackson, a student and campaign coordinator of the Consent and Sexual Health Committee at Loughborough University, England, said women experience post-sex depression more often in heterosexual relationships because of what she described as the orgasm gap.

Jackson said society expects a man to climax after intercourse, leading to women’s pleasure being an afterthought.

“During penetrative sex … women can’t orgasm just from that,” Jackson said. “Women might feel neglected, and that can lead to sadness from not feeling satisfied.”

Jackson’s advice for sex and aftercare to ensure proper intimacy — whether it’s a one-night stand or a long-term relationship — is communicating wants and needs, which can lead to a stronger orgasm.

Brase said she thinks aftercare and post-sex intimacy are things that seem to go overlooked, especially in heterosexual relationships.

Regardless of how kinky or vanilla your sex life is, aftercare and intimacy through communication and physical touch lessens the chances of PCD occurring. Designing aftercare experiences to fit one’s personal pleasures helps ensure proper intimacy.