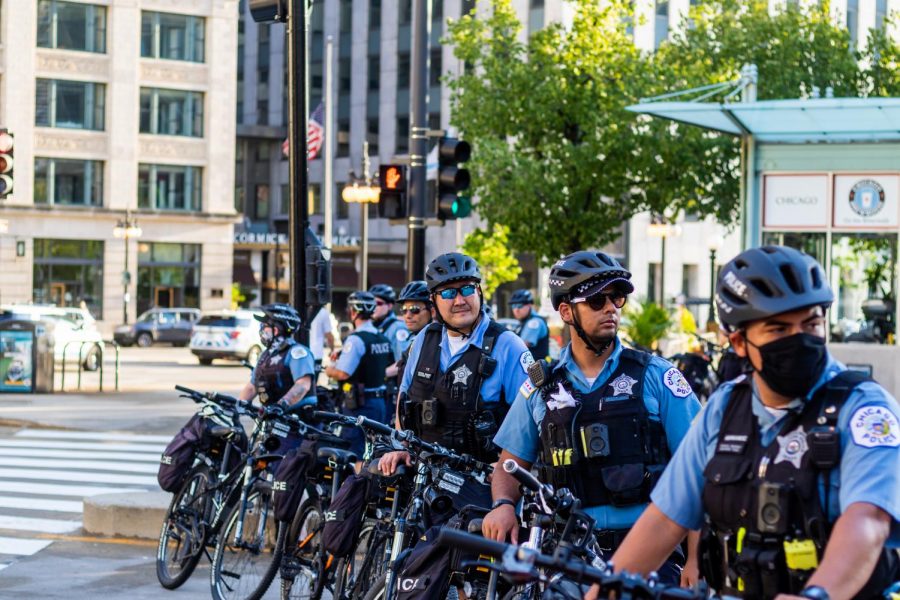 Police set up roadblocks with bikes and metal barricades to halt any attempt for protesters to cross the bridge.

By K'Von Jackson and Zachary Clingenpeel

The Chicago Police Department, the Department of Transportation and the Department of Streets and Sanitation, organized Thursday, Aug. 27 to “mitigate risk to the Central Business District,” according to the Office of Emergency Management and Communications.

The area for the drill, which took place between 6 and 9 p.m. and was led by OEMC, was bounded by Division Street to the north, 18th Street to the south, Clark Street to the west and Lakeshore Drive to the east.

The public safety drill was not in response to any expected activity and was “strictly part of ongoing precautionary efforts,” according to an OEMC statement from Executive Director Rich Guidice. These efforts include “[ensuring] the safety of large public gatherings,” as stated in a Wednesday, Aug. 26 media advisory.

The drill comes weeks after rounds of looting in the downtown area, causing property damage and the temporary closure of Columbia’s campus, as reported by the Chronicle Aug. 10.

The drill included increased police presence, multiple helicopters flying over the scene and salt trucks from the Department of Streets and Sanitation.

Protesters with The No More Foundation, Refuse Fascism and the Revolutionary Communist Party, USA gathered at the Wabash Avenue Bridge to challenge the safety drill where they were met by police and bridge barricades.

Troy Gaston, of Mutual Aid Chi in Solidarity, a community organization, said the group was out to “show solidarity for other sister cities when it comes to Black men being shot unarmed by white officers.”

Gaston said Mutual Aid Chi wanted to challenge the idea of the drill to see how “sufficient it was [in] protecting peaceful protesters.”

As of publication, OEMC officials were unavailable to provide further information on the success of the drill and whether another one is planned.