‘PlaybackPlayfwd’ album offers Columbia creatives a chance to give back 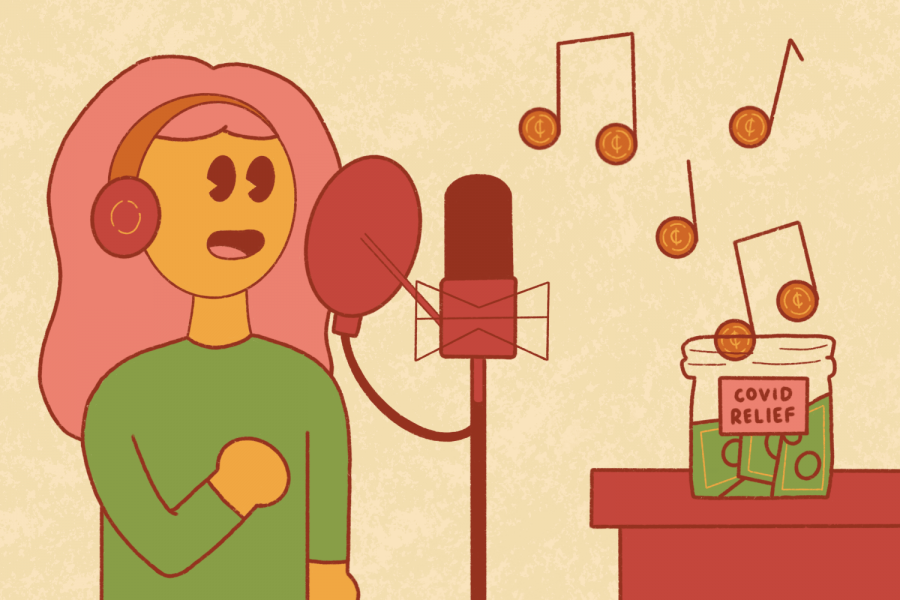 When Audio Week—a week in the Audio Arts and Acoustics Department dedicated to highlighting student work—was canceled due to the pandemic, Internship and Career Adviser Tom Joyce decided to create something new for the students to show off their work while helping COVID-19 relief efforts.

“I was at home, and I was sitting back and thinking … that I had all these students who had applied [to perform],” Joyce said. “And I just thought to myself, ‘How can we get them engaged?’”

To do this, Joyce started a new project called “PlaybackPlayfwd.” With the help of his team of students and Audio Arts and Acoustics Department Chair R. Ben Sutherland, the project culminated in a debut album showcasing Columbia talent.

Released on Oct. 23, the album features five tracks from Columbia artists representing different genres of music. Each track is an artist’s twist on a song from the years between 1900-1924 available in the public domain.

The record was recorded and produced by Columbia students and alums from various departments, which is something Sutherland said he takes pride in.

“The most positive component of this whole project was to see the walls shattered between students in different departments galvanizing their own resources,” Sutherland said. “I see this project as a model and template for embracing the creativity of our students.”

“PlaybackPlayfwd” has been featured on Columbia’s radio station WCRX 88.1 FM every Friday at 7 p.m. since the release of the album. Each week, one artist is interviewed and performs their song from the record as well as other original songs.

James Smead, senior audio design major and Audio Engineering Society president, said recording and mastering the album was a challenge because the entire process was done remotely. But, the project was still a success, he said.

“I was just so encouraged and impressed by all their ability to adapt,” Smead said. “The artists were able to record from home and get the files over to the producer engineers, and they were able to record some more things of their own and mix. We were able to get everything to the utmost quality we were looking for, despite being this at-home environment style of recording.”

In order to release and distribute the record, Joyce reached out to his friend Alan Goldsher, CEO and founder of Gold Note Records, who said he was eager to be involved in the project.

“I didn’t even listen to [the record], and I said ‘yes’ because since COVID started, I’ve been trying to be as philanthropic as I can with my music,” Goldsher said.

PlaybackPlayfwd has also partnered with MusiCares to ensure profits from streaming the album will go toward its COVID-19 relief fund.

The first album worked out so well that “PlaybackPlayfwd Volume II” has already been recorded. The group hopes to release it close to the start of the new year.

Goldsher also said he hopes his experience working with Columbia on this project will result in more partnerships between his label and Columbia students in the future.

Junior music business major Caroline Mandarino, who headed the marketing effort on the project, said one of her favorite parts of the record is that it is not for one specific target audience.

“It’s not just for a certain age group,” Mandarino said. “I showed my grandma who’s turning 80 this Sunday some of the tracks, and immediately she just lit up when she heard ‘By the Light of the Silvery Moon’ because it’s been in so many movies that she’s seen. And so it can be enjoyed by anyone from any age no matter where you are.”

Echoing Mandarino’s sentiments, Joyce said he is confident listeners will enjoy what they hear when streaming the album.

“The most exciting part for me is that the music is awesome [and] the tracks are great,” Joyce said. “These are professionally done. When people hear these tracks, they’re going to see the diversity.”