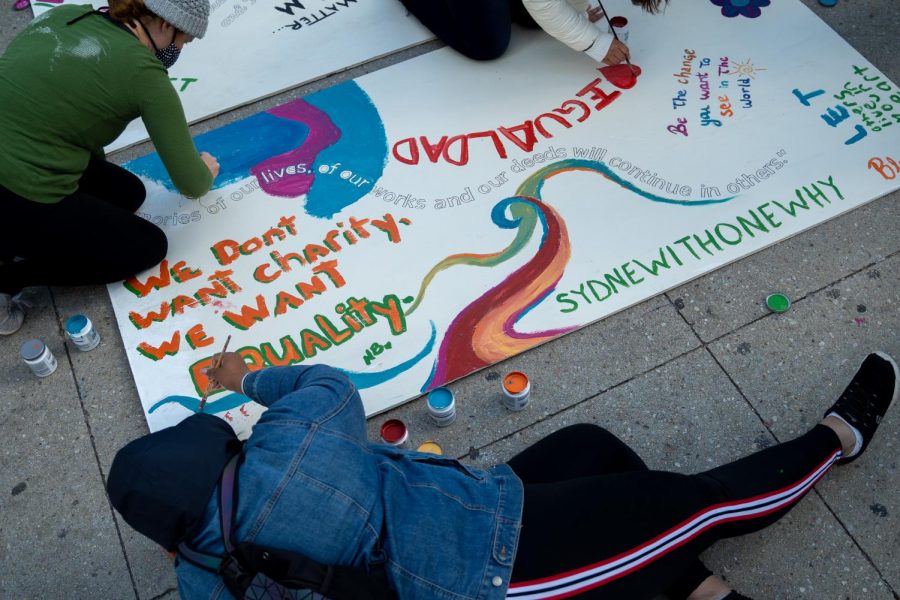 Nia Brown, a South Side Chicago resident, decides to help paint the mural after walking by Millennium Park.

Rabbi Michael Ben Yosef described Rosa Parks as “the mother of the Civil Rights era” because she helped spark the movement by refusing to give up her bus seat in 1955.

On the 15th anniversary of Park’s death, organizers gathered at Millennium Park, 201 E. Randolph St. on Saturday, Oct. 24 to create a mural to commemorate her work and honor Black women who suffered under systemic racism and lost their lives to police brutality.

Yosef, the founder of Tikkun Chai Inter-National, a humanitarian organization that advocates for human rights, and Chicago Activist Coalition For Justice, partnered with nonprofit organizations Justice for Black Lives and Black Lives Matter in Wheeling, Illinois, to organize the event and put the word out on Facebook.

The mural was made on four panels of plywood on the sidewalk in Millennium Park and will be donated to Saint Francis de Sales High School, 10155 S. Ewing Ave., on the Southeast Side of Chicago, as a way to inspire students.

Yosef said he hopes the mural will serve as a symbol of the continuous fight against systemic racism in the U.S.

Brianna Frias and her mother were in Chicago for the weekend from Dallas when they joined the muralists to show their support for the Black Lives Matter Movement.

“Justice [is] within the people and justice [is] for everyone,” Frias said.

The mural itself features Parks’ face in black and white paint surrounded by warm red, green, orange and blue colors accompanied by the words, “No justice, no peace.”

“[Parks] was treated less like a human being, just like the system has done to Breonna Taylor, Sandra Bland and Rekia Boyd,” Yosef said, referring to women who have lost their lives at the hands of police or, in the case of Bland, while in custody of a law enforcement agency.

The organizers chose to memorialize and revisit Parks’ legacy to give people hope and inspiration, Yosef said, adding that some names of lives lost to police brutality will be added to a separate banner.

Muralists were told to bring their own brushes and paint, while organizers purchased equipment for onlookers in case they wanted to participate by adding color to the background of the mural. Everyone was required to wear a face mask and physically distance themselves.

Yosef said Parks’ use of nonviolent civil disobedience resonates with him and that he promotes it in his own life.

“If we want to get our voices to be heard, it needs to be done [like how] our Mother Parks did during her time to spark the Civil Rights era,” he said. “The youth can use this as a measure of looking at history to make a difference today.”

Nia Brown, a South Side resident, said upon passing by the muralists, she decided to stop and paint with them. Brown said she is glad the organizers opened the mural up to the community.

She said the mural will influence children to think outside of the box and have the strength to stand up for what they believe in.

“This is something that should be done more often,” Brown said. “It’s a great source of joining together and creating a statement as one.”