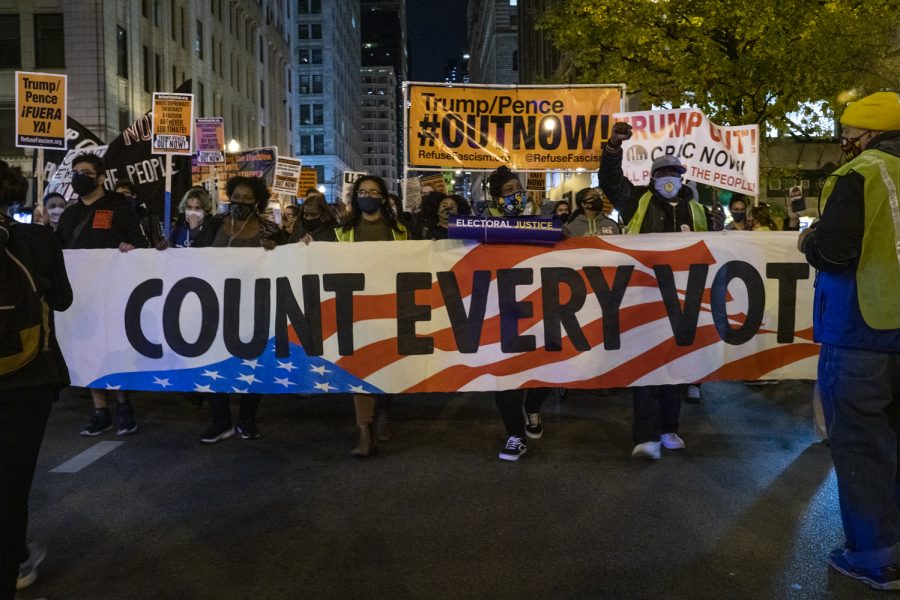 After a series of speakers from organizations across the city addressed the motivation for the rally, demonstrators made their way onto North Dearborn Street, walking toward Trump Tower.

Days after the election, results for the presidential race remain up in the air as absentee and mail-in ballots are still being counted. While President Donald Trump declared victory on Nov. 3 and stated he would go to the Supreme Court to get “all voting to stop” because he didn’t want states “to find any ballots at 4 o’clock in the morning,” Democratic presidential nominee and former Vice President Joe Biden called for all votes be counted.

Organizers took to the streets Wednesday, Nov. 4 to advocate for all votes being counted and to put pressure on politicians to live up to the promises they made during their campaigns.

The United Working Families, an independent political organization that works to give political voice to working people and advance a progressive policy agenda, organized the Illinois Election Defense Action Council through a rally at Daley Plaza to promote the tallying of all votes, according to its Facebook event page.

Hundreds of peaceful protesters chanted while flanked by police lines. The rally began around 5 p.m., and by the end of the night, organizers dispersed the group and encouraged a buddy system to make sure everyone returned home safely.

Beth Miner, volunteer at Election Defenders, said she was not worried about rioting following the election results, but she was prepared for it.

“We want to deescalate the situation, not add to it,” she said.

Miner said she had four weeks of intensive training at Election Defenders’ Schaumburg location to be nonpartisan in escalated situations and ensure people could safely vote.

The closeness of the election results indicates Democrats have have not delivered on their promises in exchange for votes from Black and Brown communities, said Kobi Guillory, a member of the Chicago Alliance Against Racist and Political Repression.

“The Democrats need to do better,” Guillory said. “It’s not enough for them to not be Trump. They need to be better than him.”

Guillory said the rally consisted of unions and community organizations like the National Lawyers Guild, the Chicago Teachers Union and Black Lives Matter Chicago. Change will come through building power within communities of working class and oppressed people and by putting pressure on politicians, he said.

Lou Downey, an organizer with Refuse Fascism, said the Democratic Party will not stand up against fascism in the way it needs to be fought, but the citizens can by making their voices heard.

Downey said people must bring forward their diversity and humanity and call the Trump administration out as an “illegitimate regime” for celebrating and inciting violence between BIPOC and police officers, destroying the environment and discussing restrictions on some LGBTQ+ rights and women’s abortion rights.

Trump wanting the Supreme Court to stop states from counting votes did not surprise Claire Pentecost, a member of Extinction Rebellion.

Pentecost said “Trumpism” will not end when he leaves the White House and her work in activism will not stop regardless of who the president is or who sits on the Senate.

Matthew Wilder, a member of Socialist Alternative, said there is a rejection of Trump and a lack of confidence in Biden in the “weak” results from the election so far.

Wilder said working unions and schools need to respond through nationwide strikes and walkouts if Trump attempts to steal the election.

“There needs to be mass civil disobedience if Trump tries to steal the election,” he said.