Opinion: This is a man’s world, and it’s hurting women 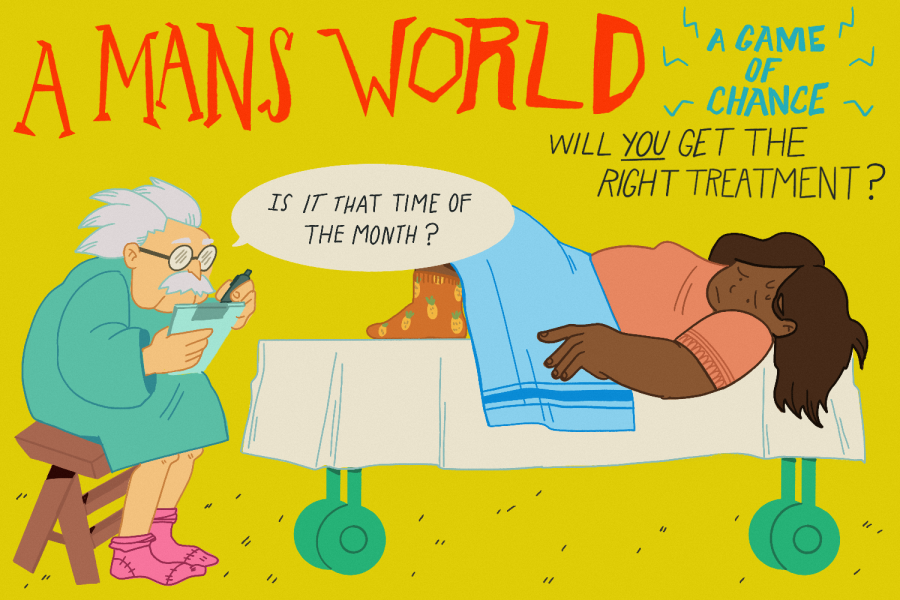 Have you ever had to bring a jacket to work, even if it is 90 degrees outside, or wondered why you are the only one who seems to be freezing in the office? This may not seem major, but it is just one example of how having standards geared toward men can negatively effect women.

Even though women comprise half of the workforce, office temperatures are based on men’s preferred temperatures. Offices are kept at a temperature based on men’s body heat consumption, despite women having slower metabolic rates than men and therefore requiring a warmer office, according to a 2015 article from the New York Times.

While the concept that men generally have it easier than women in society may seem obvious, many may be unaware of the major consequences that stem from seemingly minute gender-biased standards of operation.

Shivering in an office is one thing, but a 2019 report by Consumer Reports found that women are 73% more likely to be seriously injured in a car accident than men, and 17% more likely to be killed. This is due to crash dummies being based on masculine physiques.

Women and men’s bodies react differently when involved in a car crash. According to the report, women are typically smaller than men and therefore sit closer to the steering wheel, which causes women to have a higher chance of injury in collisions. There are also internal differences between men and women, such as the size of the pelvis bone, that can put women at a greater risk.

Women are not just smaller versions of men, yet many companies consider them as such when testing products. Laila Farah, an associate professor of women and gender studies at DePaul University, said there are a lot of factors which contribute to why corporations focus on men more the women.

“It’s really about … the marriage of predatory capitalism and patriarchy, which exists under the umbrella of white supremacy,” Farah said. “As long as you have the medical industrial complex, which includes big pharma, and government officials who don’t give a damn, [testing standards] won’t change.”

A study conducted by the University of California, Berkeley and the University of Chicago examined why women are almost twice as likely to have a bad reaction to medication. Out of the 86 medications tested, the majority of medications with clinical trials based on men, had more adverse effects on women. This led to a higher chance of women being overmedicated when given these drugs.

“Gender inequity is the least of [big corporations’] concern, and making money is the most of their concern,” Farah said.

Women and men also often experience different symptoms of diseases. Heart disease is the number one killer of women, according to the Center for Disease Control and Prevention, and yet most people do not know how to detect a female heart attack. If people don’t know the symptoms, then they don’t know if they need to go to the hospital.

One of the most well-known symptoms of a heart attack in men is chest pain, but women do not always experience this which can lead to heart attacks going undetected in women. According to the American Heart Association, women can feel chest pain, but many experience pain in their arms, backs or stomachs, shortness of breath, or nausea.

The issue is about more than just gender. A study conducted by the National Center of Biotechnology Information found there are implicit biases within the medical community that lead to people of color, especially Black Americans, not receiving proper treatment. The study found that Black Americans are less likely to be believed about pain they are experiencing, due to a false belief that Black bodies are “stronger” than white bodies.

In the fight toward gender and racial equality, it is often hard to focus on all of the pieces that make up the big picture. However, the country being geared for men is hurting women across the country, and a lot of people do not even realize it is happening.

True equality must exist in all aspects of society, and women are not equal if they cannot safely drive a car or get proper medical treatment.