Opinion: ‘Support the troops’ slogan is meaningless unless matched with action to dismantle the military-industrial complex 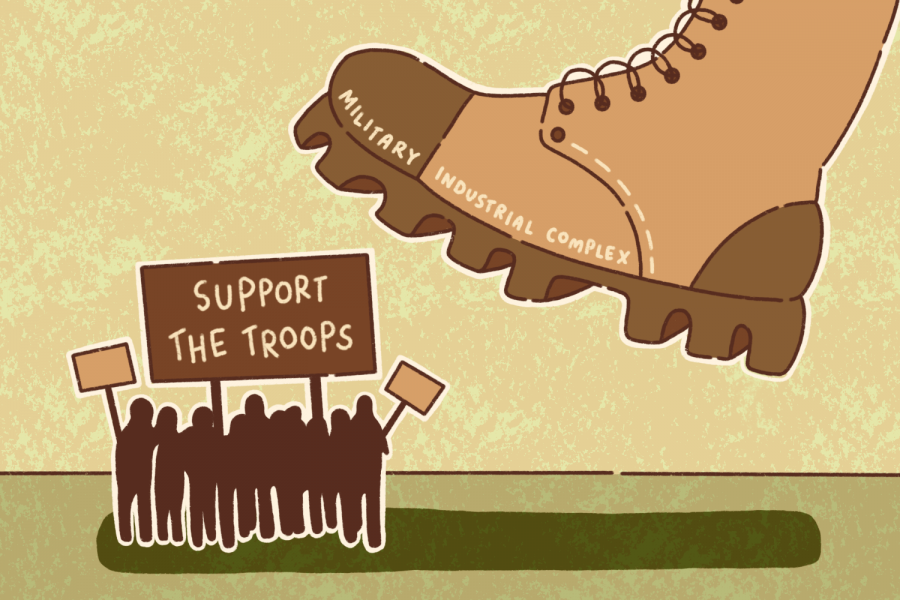 With the possibility of troops returning home from Afghanistan, Iraq and Somalia due to an anticipated order from outgoing President Donald Trump, now is the time to address the internal issues of our military. The first step in resolving these complex problems starts with the belief that war should not be a profitable business.

My childhood was defined by having a father in the Marines. We spent weekends playing at the Dayton Marine Corps Home Training Center and chose our vacations according to wherever Marine Week was. When my father flew helicopters, we went to the base to see them. When he was working in recruitment, he was invited to our schools. When he was the inspector-Instructor of Funeral Honor Details, we went to the funerals he directed and paid our respects.

Americans are taught from a young age that our military is good and helps people. As a child, I agreed with this statement and never questioned it. But as I grew up, I came to disagree with the way our military works.

I do not think the U.S. should have engaged in wars in Vietnam and Iraq and I am vehemently opposed to our use of drone strikes and atomic bombs, our imperialism in the Middle East and our country’s earth shattering estimated $934 billion defense budget.

The military-industrial complex is comprised of politicians, individuals and institutions involved in the production of weapons and military technologies. President Dwight D. Eisenhower, a five-star general in the U.S. Army, famously warned against this complex in 1961, saying “the potential for the disastrous rise of misplaced power exists and will persist.”

American firms made $192.3 billion from weapon sales in fiscal year 2018, and American companies accounted for 11 of the top 20 companies worldwide profiting from war, according to data provided by the Stockholm International Peace Research Institute.

The U.S. has historically supported the military-industrial complex without providing nearly enough support or care for those actually in the service. We masquerade as a patriotic country that loves our freedom and those who fight for it. We wave flags, shoot fireworks, say the Pledge of Allegiance before school starts each day and get furious if anyone dares to not stand for the national anthem.

But our passion for our troops ends with these superficial displays. The U.S. has consistently neglected the actual needs of our troops—ignoring problems of mental health, homelessness, citizenship, sexual assault and harassment.

As many as 50% of veterans experience substantial difficulty returning home, with a third developing serious mental health problems, such as anxiety disorders, depression and PTSD. Veterans are more than twice as likely to die by suicide than civilians, with 17 veterans committing suicide each day, according to the Department of Veteran Affair’s 2019 National Veteran Suicide Prevention Annual Report.

Only 10% of the military budget is for Veteran Affairs, the only internal service designated to care for the troops. The lack of mental health care provided by the VA is exacerbated by the stigma and shame military personnel face, leaving many reluctant to seek help.

The military-industrial complex has created an inhumane culture of treating veterans as objects. Troops are promised college, livelihoods and easier paths to citizenship but end up discarded after serving their purpose.

Eleven percent of the adult homeless population are veterans. Immigrants in the U.S. military are denied citizenship more often than civilians, and more than 20,000 service members reported sexual assault in the fiscal year of 2018, according to a 2018 anonymous Pentagon survey.

The military-industrial complex has created an intricate web of problems that cannot be fixed with one simple solution. The entire military culture has to change—our focus must shift from weapons to people.

Growing up in a military family and personally disagreeing with its ideologies has been a difficult balancing act. Listening to my father talk about his time as a casualty assistance calls officer, as well as hearing his stories about his friends who have passed, has required me to view the military as much more than a faceless bastion.

Wanting better care for veterans and speaking out against warfare are not mutually exclusive; in fact, the solution for both is the same. Changing the way the system works is a difficult but necessary task that begins with one principle: No one should profit from war.