OPINION: Liberty and tweets for all 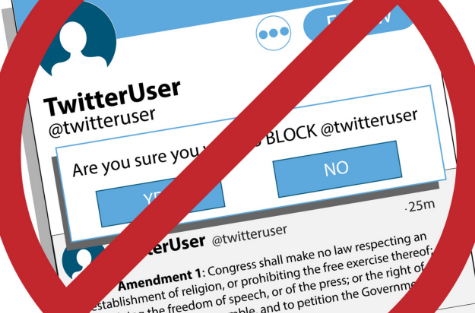 As of Tuesday, the 2nd U.S. Circuit Court of Appeals found President Donald Trump to be in violation of the First Amendment after he blocked seven different users from his personal Twitter account, @realDonaldTrump.

The ruling came after a panel of three judges decided it was unconstitutional for government officials to block users from their profiles since the social media platform is used “to conduct official business and to interact with the public,” according to the court ruling. The commander-in-chief has yet to respond to the ruling—on the Twittersphere or otherwise—as of press time.

The president blocked users that posted unfavorable tweets or replies aimed at him—some were more pressing, calling him out for his continued disbelief of the climate crisis, while others were simplistic, stating Trump was a “bloody idiot” and a “national embarrassment.”

The users, backed by Knight First Amendment Institute, took him to court, citing that his Twitter is a public forum, and no citizen—especially one who is merely criticizing the current administration—should be obstructed from viewing that.

Regardless of content, Trump’s Twitter account is the most consistent way he reveals information to the public. Be it hard-hitting news, or another reminder as to why he is unfit for his position, a democracy is not a democracy if we cannot all join in on the conversation.

However, Trump isn’t the only one facing heat following the ruling. Rep. Alexandria Ocasio-Cortez (D-N.Y.) is facing two lawsuits from Republican congressional candidate Joseph Saladino and former New York Assemblyman Dov Hikind after she blocked them on Twitter for opposing her policies.

“The law applies to socialists just as it does to capitalists,” Hikind tweeted Tuesday night.

The court ruling does support their claims, stating that “the First Amendment does not permit a public official who utilizes a social media account for all manner of official purposes to exclude persons from an otherwise‐open online dialogue because they expressed views with which the official disagrees.”

Trump, who is just shy of 62 million Twitter followers, is a loose cannon as far as social media updates go. He also exhibits a wide range of tweets—the run-of-the-mill ones are aggressive and unfiltered, while the more professional and mundane of his outcries have made viewers wonder if he even wrote them.

Oftentimes he is his own press, announcing time sensitive news such as Sarah Huckabee Sanders stepping down from her position as White House Press Secretary before any other official announcement was made.

The immediacy of Twitter, though sometimes jarring, may be the best way for us to understand the mental and political workings of the administration. When we allow the governing body to sever its citizens from information, we are allowing biased actions and childlike antics to prevail.

The First Amendment guarantees the luxury of free speech—whether that is Trump insisting we “MAKE AMERICA GREAT AGAIN” or one of his many critics pointing out yet another one of his flaws over social media.

The Court of Appeals declares this in the closing of the court ruling, something that rings true no matter the period of time it resounds from: “We remind … the public that if the First Amendment means anything, it means that the best response to disfavored speech on matters of public concern is more speech, not less.”