Opinion: It is OK to pause the hustle 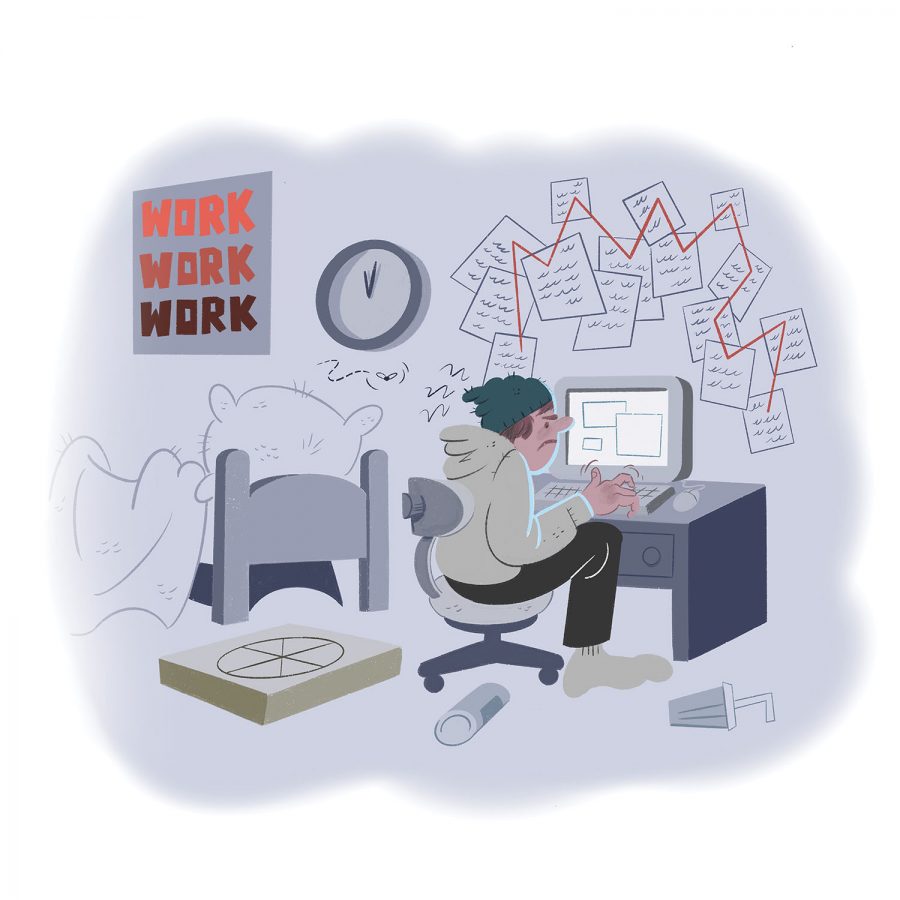 Bright blue light drowns out a darkness that should otherwise engulf the room at an early hour like this. Two sets of hands furiously type away—one on a class assignment, the other on a personal project.

Around midnight, my mind begins to wander from the screen toward the alarm clock set for 6 a.m., and then it wanders even further to tomorrow night, when this will happen all over again.

My roommate’s typing pierces these thoughts, bringing focus back to the screen. Two sets of hands continue their ritual. This is not an isolated incident for me, my roommate or college students, in general.

Habits such as these contribute to what is known as “hustle culture,” or the belief that one must spend every waking moment fully exerting themselves to become successful. This mindset is often romanticized and is seemingly admirable, especially by those just starting off in their chosen fields. But what hustle culture actually does is masterfully disguise unhealthy habits that glorify working oneself to death.

Some of the main practices hustle culture encourages, such as working long hours and late nights, can cause “severe health issues,” according to a 2019 study from the International Journal of Advanced Microbiology and Health Research. The journal found: “The key consequences of chronic working may disrupt the biological rhythm of the body.”

Work and stress are undoubtedly  linked.

Adverse health effects caused by overworking not only impact the body in obvious ways, such as with a downturn in mental health, but it can also increase the risk of Type 2 Diabetes, obesity and cerebrovascular problems, which can lead to strokes or aneurysms. Additionally, there may be a correlation between overworking and complications during pregnancy, according to the study.

With the evolution of journalism over the past few decades, the number of employees in the newsroom has plummeted while the number of freelancers has skyrocketed. As someone pursuing a career in photojournalism, I’m almost guaranteed a future in freelancing.

While working for oneself can feel liberating, the lack of job security among freelancers creates the perfect environment for someone to fall prey to hustle culture. Each new assignment will depend on the quality of those that came before, so freelancers should give their all to every assignment, right? Well, yes and no. Ideally, freelancers should do the best they can without shifting their work-life balance into complete disarray.

If it is not already evident, hustle culture displayed on social media reinforces the idea that unhealthy practices are the only way to get ahead in the world. The intention of those who spread these ideas is likely to provide users with tough love.  However, more often than not their attempts seem to fall flat, resulting in a somewhat disrespectful and misinformed message.

How do we counteract hustle culture? When scrolling through social media, ignore hustle culture messages; on your day off, skip those early morning alarms, especially after a late night working. Instead, get that extra hour of sleep, watch a funny movie with a friend or just take a break. It’s necessary and well-deserved.