Opinion: Biden needs to deliver on his promises, starting with $2,000 stimulus checks 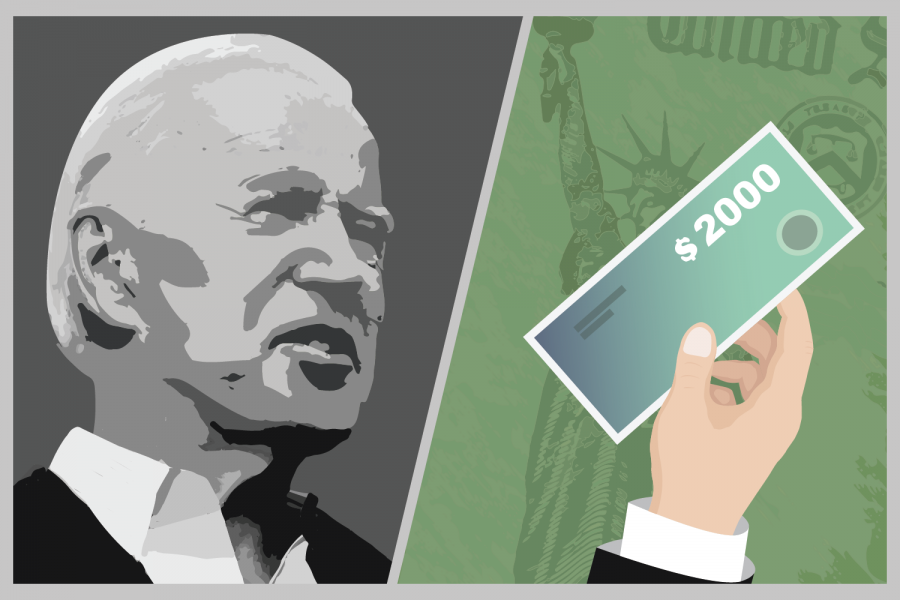 Politicians make promises they cannot keep in almost every election. While it is often how they get elected in the first place, this should not be the case. President Joe Biden promised $2,000 stimulus checks, and he needs to follow through.

The debate over stimulus payments has been ongoing since the pandemic started. Many Americans received $1,200 in April 2020 and have either received or will receive $600 from the most recent package passed in December.

During the runoff election campaigns for two Georgia Senate seats, Biden—along with the Democratic candidates who both won, Sens. Jon Ossoff and Raphael Warnock—promised $2,000 stimulus checks would be going out almost immediately if Democrats gained control of the Senate.

Biden’s $1.9 trillion American Rescue Plan includes a national vaccination plan, a plan to reopen schools, an expansion of unemployment benefits, and the plan to send $1,400 checks to individuals making up to $75,000 and married couples making up to $150,000

More progressive congresspeople, including independent Sen. Bernie Sanders from Vermont and Democratic Sen. Ed Markey from Massachusetts, had already proposed $2,000 stimulus checks in May, but after former President Donald Trump announced his support for the larger stimulus payments in late December, Biden was also quick to support the $2,000 amount.

The promise worked: Both Georgia Democratic Senate candidates won their seats in the runoff election, and the Democrats took control of the Senate.

The $2,000 has been changed to $1,400 in the latest stimulus proposals, with the official Democratic National Committee Twitter claiming it is because many Americans already got $600.

This change has led to widespread protest by others in the Democratic Party, including Rep. Alexandria Ocasio-Cortez (D-NY).

Big campaign promises tend to work the first time a politician uses them, and voters are more likely to vote for candidates who have fulfilled past promises, according to a 2019 study conducted by the University of Chicago.

Voters reward honesty. They want to vote for someone they trust.

The promises kept and not kept will impact the way people vote in 2024, whether Biden runs for a second term or Vice President Kamala Harris runs in his place.

We are almost at the one year mark of the pandemic, and so far, Americans have received at the most around $1,800 total in direct, financial aid.

The government has provided aid in other ways. The Department of Housing and Urban Development provided rental help for low-income renters. There is a temporary halt on residential evictions which was extended through March. Food stamp requirements were changed so more people could apply and some recipients could receive supplemental support. Unemployment insurance and benefits have been temporarily extended and enhanced.

These changes in rules have helped many people, but they did not provide enough aid to many who still need help.

According to an Oct.15 study conducted by Columbia University, an additional 8 million Americans fell into poverty during the pandemic. Although unemployment benefits did help, it was not enough to stop the increase in poverty as unemployment reached a high of 14.7%, according to NBC News.

The current unemployment rate is at 6.3%, or around 10.1 million people, according to the Department of Labor. The unemployment rate does not include those who can’t work or who are not looking for work, which can include students, retirees and people at home caring for family members, so unemployment numbers do not paint a complete picture. The pandemic is not behind us, and neither are people’s struggles.

Biden’s administration needs to step up to help the American people. His American Rescue Plan includes many good ways to help Americans, but he promised $2,000 and should not backtrack.

The $2,000 checks would help citizens afford bills, food and housing and pay back debts. It at the very least gives people who are struggling a bit of relief.

Biden gave people hope they might get significant financial help when he promised that $2,000 checks would go out the door immediately. For him to backtrack on this not only makes him look bad, but it makes Trump look better.

The proverbial “undecided voters” may question if they would have gotten the money under Trump, and that could greatly influence the outcomes of the 2022 midterm and the 2024 general elections.

Biden made the promise. Now he needs to deliver.