The Columbia Chronicle • May 2, 2019 • https://columbiachronicle.com/one-woman-show-visits-chicago-sparks-conversation-about-artistry-in-current-political-climate 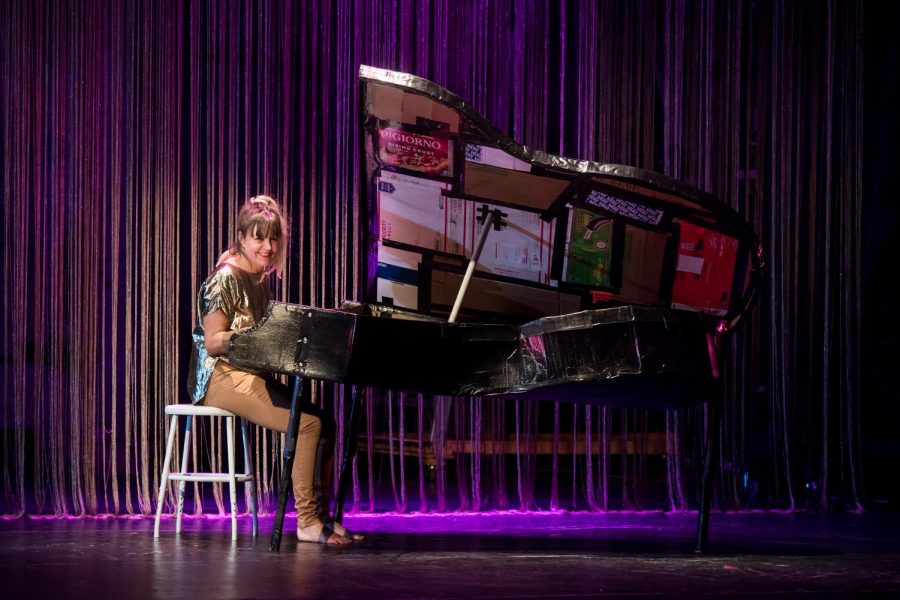 In a stand-alone performance about what it is like to create art with a 24-hour news cycle, choreographer, circus performer, acrobat, dancer, writer and comedian Adrienne Truscott is coming to the Museum of Contemporary Art May 2–5 to showcase “THIS.”

Truscott’s writing is the backbone of the show, which revolves around topics such as growing up as a woman and the current news cycle.  The show has been performed in New York City, Minneapolis, Boston and will now be making its Chicago debut.

Truscott has brought humor to topics considered to be off limits to comedians, such as rape. She’s also been known to appear on stage partially naked and to push the limits of performance to the extremes.

The Chronicle spoke with Truscott to get a peek into her visions about the show.

THE CHRONICLE: Why is it important to continue the show for you?

On the one hand, I think if a show is made well, it brings in growth each performance because each new audience is a new [set of] collaborators. I think ‘THIS’ is like a performance of being in a slightly liminal space around memory and time and fact and authorship as it distills through trauma. The show is relevant to talking about how people who have survived trauma remember things; [survivors] don’t always remember the things that make people believe [them].

What can the audience expect in the show?

The ways I choose to tell stories get real slippery about how they’re delivered. One minute I’m storytelling, the next minute I’m doing stand up, the next minute I’m absent—not even in the place—and [the audience is] not sure where I am. It’s a very playful piece that’s like, ‘Hey what are we watching? Are we watching a bit of stand up comedy?’ and then it flips around and it’s like, ‘Oh no, this feels like an author talk.’ Then it’s like, ‘Wait no, we’re at a cabaret.’

Do you believe it’s hard to create art in the current political landscape?

It kind of depends on the day of the week for me. Some days I feel like it’s impossible, and who cares? And then other days I think, ‘Oh my God, it’s so important to make art. This is a way to push back, this is a way to understand what we’re all going through.’ It’s a way to find community so that we don’t feel like we’re lost.

What stories are talked about in the show?

There are stories about being a kid left alone and having to make up [one’s] own rules and survival skills while also trying to be playful and make sense of things.