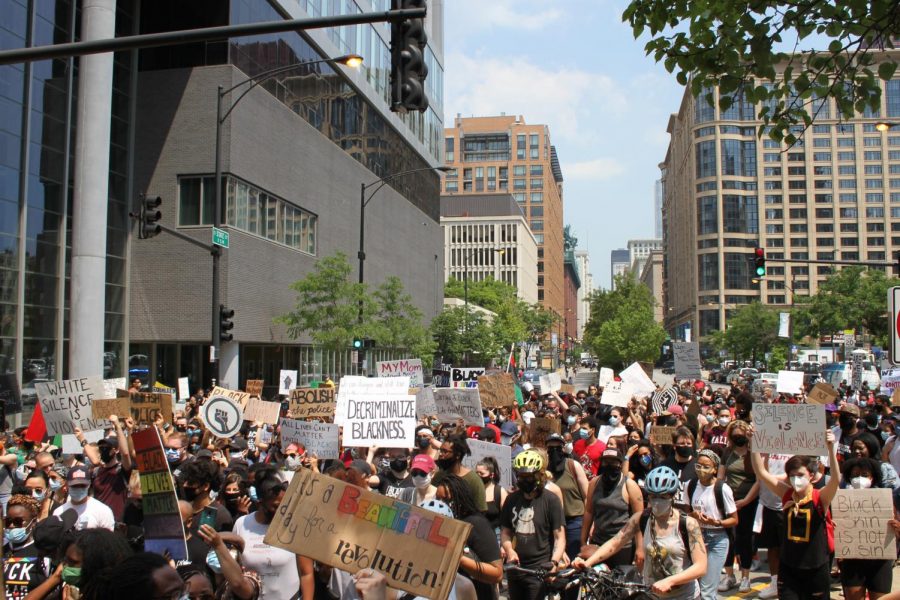 Celebratory music from a marching band playing “When the Saints Go Marching In” could be heard from blocks away while close to a thousand protesters with vibrant signs for the “One Million Man March” made their way north on Dearborn Street to celebrate Juneteenth.

Ashley Michelle Munson, the lead organizer of the march held Friday, June 19, said she celebrates Juneteenth because it commemorates Black liberation. But she added that there is more work to be done because Black people are only “free-ish” in America, a reference to the ABC television show, “‘Black-ish.”

“Today we are here to not only commemorate Juneteenth—the day that marks the emancipation of all slaves in the Confederacy—we are here to [take] a stand,” she said.

The event started from 701 S. State St. and ended at Daley Plaza, 50 W. Washington St. Friday was the official Juneteenth celebration, but other events were held across the city throughout the weekend.

Perla Vargas, an occupational therapy student at Lewis University, said growing up in a small town of about 1,200 people, she was not taught Black history and learned about Juneteenth only a few years ago.

Vargas said she wants to be a part of the change in how the country addresses race relations and give a voice to those who could not physically attend the march.

“A lot of people see posts and they’re like, ‘Oh, just because I shared it, that’s enough,’ but you have to be able to understand the background of that … ,” Vargas said.

Juneteenth—officially celebrated on June 19—commemorates the day the last enslaved Black Americans in Galveston, Texas, learned of their liberation—months after the Civil War ended and two and a half years after the Emancipation Proclamation was issued by Abraham Lincoln on January 1, 1863.

However, Juneteenth is not an official federal holiday, nor is it a state or city holiday in Chicago. Ald. Maria Hadden (49th Ward) introduced legislation to make it an official holiday in November 2019.

Mayor Lori Lightfoot responded to the proposal in a virtual Chicago City Council meeting Wednesday, June 17, and said the city could not afford to add an additional paid holiday. Rather, Lightfoot said, the city would honor and recognize the day and “celebrate African American freedom and achievement,” as reported by WTTW June 17.

In a Friday, June 19 press conference, Gov. J.B. Pritzker said he would work with the Illinois General Assembly to make Juneteenth an official state holiday. In his Juneteenth proclamation, Pritzker ordered all flags under state jurisdiction to fly at half-staff and urged Illinois residents to reflect on “our history” and “our future.”

Also on Friday, Cook County President Toni Preckwinkle and other elected officials marched from Roosevelt and Columbus drives to Grant Park to celebrate the day.

In addition to demanding Juneteenth become an official holiday, Munson said she is pushing for equity in the education system and community investments, passing the Civilian Police Accountability Council ordinance and seeking reparations from the federal government among other social justice reforms.

She said the murder of George Floyd at the hands of a Minneapolis police officer and its proximity to Juneteenth has pushed Black people to come together to move forward and unite for greater strength.

Nadjah McLaurin, a recreational therapist and Naperville resident who attended the march with Vargas, said she attended the march to advocate for herself and the many other Black, Indigenous and people of color, or BIPOC, who continuously face abuse and oppression by the government.

“I’m fighting for my own life, fighting for my friends’ life, my family’s life,” she said. “[I’m] standing up for people who also don’t have a voice that can’t speak no more because of police brutality and oppression.”

McLaurin said it is not Black people’s duty to educate others about racism. Instead, allies should take initiative and inform themselves. She also said there are many resources like books, podcasts and movies that can help.

Englewood resident Tanisha Peoples, one of the speakers at the march, said true liberation is colorblind, gender blind and label blind. But in order to reach full equality, she said White people need to be willing to sacrifice some of their privileges for Black people.

“We got to make Black lives matter,” she said. “Black lives don’t matter in America because talk is cheap, but history got receipts.”