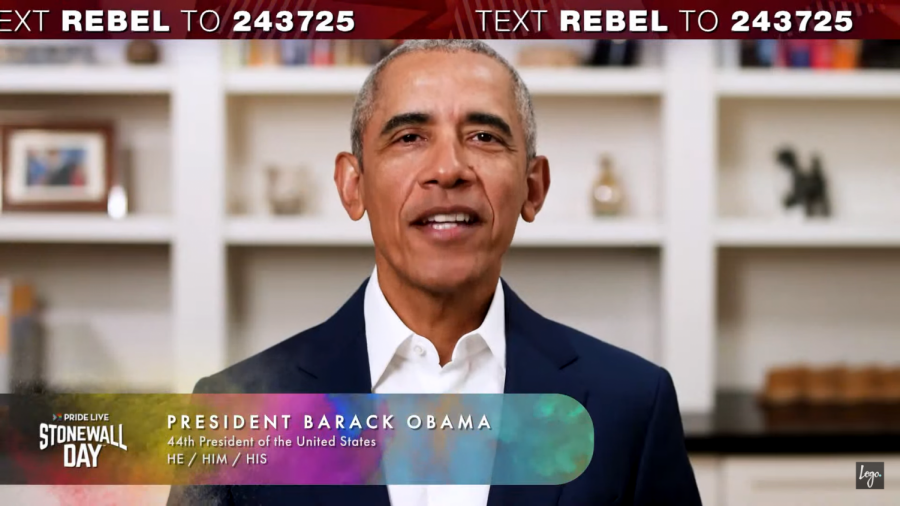 Just ahead of the anniversary of the 1969 Stonewall Riots, former President Barack Obama said progress does not happen on its own, but only when people stand up, speak out and demand change.

“We’re almost 51 years since the night when the patrons of the Stonewall Inn stood up for their rights and set off one of America’s defining victories for civil rights,” Obama said. He said that spark led to marriage equality and the Supreme Court’s ruling June 15 stating employers can no longer discriminate against LGBTQ+ workers.

Pride Live is an advocacy and awareness organization dedicated to the LGBTQ+ community “via social advocacy and community engagement to advance the fight for full equality.” Launched by Pride Live in 2018, Stonewall Day is a day of awareness in honor of those who protested for LGBTQ+ rights in the riots at New York City’s Stonewall Inn in 1969, according to its website.

This year’s event was a virtual livestream fundraiser for the LGBTQ+ youth organizations affected by the coronavirus: The Ally Coalition, Brave Space Alliance, the TransLatin@ Coalition and Trans Lifeline. Logo TV streamed the event on their YouTube and Facebook pages.

Obama said voices speaking out make an enormous difference, whether people are fighting to protect a patient from discrimination in the health care system, combating violence against the LGBTQ+ community—particularly against trans women of color—or “linking arms with causes of racial and social justice that [are] sweeping the country.”

Joe Biden said as the lives of trans individuals, particularly Black trans women, are still under attack, it is important to remember Marsha P. Johnson and Sylvia Rivera, who were prominent figures during the Stonewall Riots and helped frame the movement for LGBTQ+ rights that continues “against the backdrop of a pandemic and historic protests against systematic injustice and racism.”

Jill Biden said although this year has been difficult because of the pandemic, she has seen people come together and said there are many reasons to feel hopeful.

“This month reminds us that progress is not waited for, but won,” she said. “After all, Pride is a protest.”

Joe Biden said there has been tremendous progress for the LGBTQ+ community but the fight is far from over. He said wherever injustice exists, leaders across the world must respond with action.

“I assure you, America once again will be the beacon of hope for the LGBTQ people here at home and throughout the world,” he said.

Dr. Yvette C. Burton, president of Pride Live, said Black trans people continue to be the catalyst and the litmus test for full equality in the communities they live in.

“When Barack Obama was asked, ‘Why the focus on Black Lives Matter and not All Lives Matter or Blue Lives Matter?’ he warned that we underscore [impact],” she said. “Of course all lives matter, but the impact of violence that Black people experience and the urgency of it now is not equal.”

Burton thanked Pride Live’s beneficiaries and partners at Warner Media and Pride Media for the work they do in their communities using their lives to “pierce the silence around continued oppression.”

“Trans people of color [are] much more than an ornamental nod to political correctness,” Burton said. “It’s fundamental to the heart and soul of our collective history.”

Obama said it is important to register to vote and keep protesting peacefully and safely, whether it is on social media or in the streets.

“Never doubt that the democratic story of change that we celebrate today is still possible, because it is,” Obama said. “If we all do our part in our time, I believe that five years or 50 years from now, folks might gather to commemorate the victories that we all achieved beginning right now.”