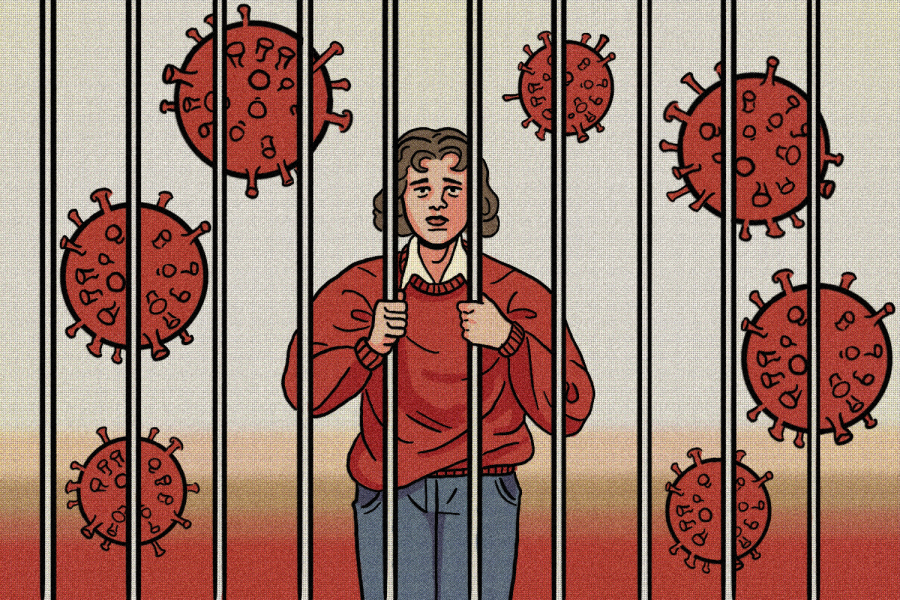 After hanging out with a friend on Halloween, Emma Schleppi learned she was exposed to COVID-19.

A week later, Columbia contacted Schleppi, a sophomore acting major, and gave her two hours to pack some things from her apartment at the Dwight, 642 S. Clark St., and escorted her to the University Center, where she would stay in a designated quarantine room for the next two weeks.

Schleppi said when she arrived at the UC, 525 S. State St., on Nov. 6, she was not prepared for the conditions of her future home for the next two weeks.

“There wasn’t any hand soap in there, and towels had stains on them,” she said. “There were issues with the floor and counters not being cleaned as well. It just seemed like no one had been in this room for months.”

Brooke Lopeman, executive director of Peak Campus, which manages the UC, said records show the unit was scheduled for cleaning on Nov. 2, and Schleppi was the first person to live in it since then.

Lopeman said she followed up with the housing and janitorial teams in order to ensure that cleaning will be done right before students are placed in the quarantine rooms to avoid this situation in the future.

At the time, Schleppi said she did not know whom to contact to resolve these problems, so she ended up cleaning everything by herself and avoided using the dirtiest towel.

Beverly Anderson, associate dean of Student Health and Support and Title IX coordinator, said in a Nov. 20 email to the Chronicle that the college mandates students quarantine in the UC if they have tested positive for COVID-19 or were in close contact with others who test positive.

Freshman audio arts major Olivia Brunell was placed in quarantine at the UC on Oct. 25 after learning her friend, with whom she had recently spent time, tested positive for COVID-19.

Although the RA on duty at the UC said it would cost $50 to put a fridge in the apartment, according to Brunell, she received one without being charged on the second day of quarantine after security put in a maintenance request.

“There’s just a lot of misinformation; not everybody’s on the same page,” she said.

In the Nov. 20 email, Anderson said students quarantining in the UC are provided with an “extra-long twin size bed, linen, a towel, a face cloth, toilet paper, water and meal service.”

She said prior to entering the UC for quarantine, the student receives an email from UC staff with instructions for entering the building and requesting additional items like food, snacks, towels and toilet paper, along with information about the check-in process and contact information for UC management.

Brunell was released from her on-campus quarantine on Nov. 4. After leaving quarantine, Brunell decided she will not hang out with anyone from campus unless they are six feet apart.

“If I had to go through that quarantine again, I would be devastated; it was awful physically and mentally,” she said.

Anderson said when the Residence Life office receives a complaint from a student or their family, a staff member immediately contacts the student to address the issue.

“We are continually trying to improve the process and regret if some students haven’t been satisfied with their experience,” Anderson said. “There is a daily meeting of designated offices to review student [COVID-19] related matters.”

Anderson said students in the quarantine rooms receive three meals a day, which they choose from a given menu, as well as a one-time food order from an external source.

Meals were a common concern for students in quarantine.

Emily Siegel, a freshman graphic design major, said when she was in a quarantine room, the menu was set and did not allow her to request extra food or water. When Siegel asked for more water in an email to Jillian London, resident activity and program coordinator at the UC, her request was declined and she was told the limit was two bottles of water per meal.

Lopeman said the UC understands “how frustrating and difficult quarantine can be” and that they want to ensure the experience is as comfortable as possible.

“As a courtesy to those who are in quarantine, we provide two bottled waters per day that come with the meals provided,” Lopeman said. “There is also tap water available in the units’ sinks and we recommend students refill these bottles as needed.”

Siegel said she ordered groceries and toilet paper from Instacart to keep her going and that nobody would have been able to eat a “good amount of food” in quarantine.

Siegel said she was in quarantine starting Oct. 26 and was released Nov. 8.

Schleppi said she also had a few issues with the meals being served because of times her breakfast bagels had mold on them, some fruit were bruised and a salad was spoiled and left her hungry.

Lopeman said the UC’s dining provider Chartwells has “worked hard to make three customized meals for each resident in isolation and quarantine daily.

“We know how important it is for residents in quarantine to get quality, nutritious meals,” Lopeman said. “If there are any issues or even if extra meals are needed, we always have a few extras made up, including both vegan and vegetarian options. Our team is also available 24 hours per day to address any issues.”

But the biggest concern for some students was communication and transparency from the college.

Siegel said she ended up going to the hospital in the middle of the night on her first quarantine day because of an anxiety attack.

“It was so stressful,” she said. “There are just so many phone numbers that you have to keep track of, and it was like a game of telephone with the school.”

Schleppi also tested negative for COVID-19 on Nov. 3, but still had to quarantine.

Leigha Schleppi, Emma Schleppi’s mom, said she talked to Ron Jovi Ramirez, coordinator of programming at Residence Life, who said her daughter would be checked on daily.

However, Schleppi’s mom said there was “not one bit” of follow-up communication.

Leigha Schleppi said Chief of Staff Laurent Pernot emailed an apology and she later contacted him by phone. She said Pernot promised improvements would be made to the quarantine process.

Associate Vice President of Strategic Communications and External Relations Lambrini Lukidis could not confirm an apology was made due to federal privacy rules concerning students and patients, but she said any complaints or reports to the college in regard to quarantine rooms have been addressed and handled.

Lukidis said after assessing the quarantine system this semester, the college has since developed plans for additional check-ins with those in the rooms next semester, but she did not have a specific number for how many times students will be checked on.