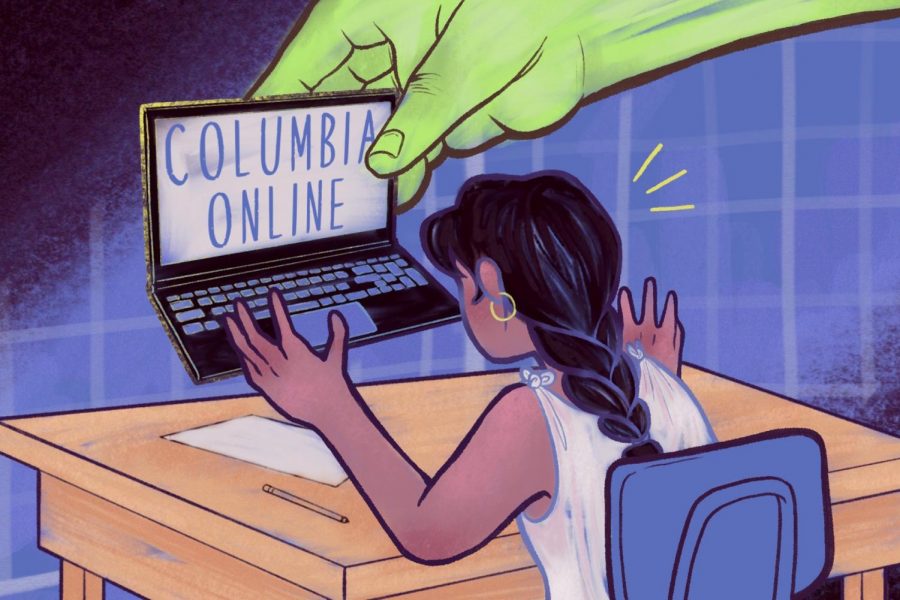 After a May announcement that the program would be cut due to pandemic-related financial burdens on the college, the Columbia Online program concluded in June, resulting in staff layoffs.

Lambrini Lukidis, associate vice president of Strategic Communications and External Relations, said the elimination of Columbia Online after the conclusion of its recent eight-week session resulted in the layoffs of seven staff members—two non-union and five union employees. They were given an anticipated last day of work at the end of June to complete the transition period.

Five members of the Columbia Online staff, primarily composed of instructors and United Staff of Columbia College union members, are being paid for an additional 60 days after their final work day in June. After those 60 days, the former Columbia Online staff will receive two weeks of severance pay.

In a May 26 email to faculty and staff, President and CEO Kwang-Wu Kim announced the decision to cut the non-degree-granting online education program, which offered various courses resulting in professional certificates and standalone classes across disciplines for adult learners and working professionals.

Kim said when Columbia Online launched in 2017, the administration expected revenue from the program to exceed the program’s costs by the Fall 2022 semester. But he said the actual “growth” of the program had not met expectations and “consistently lagged projections and operating expenditures.”

“There were no online badges—things that were becoming the norm in the digital space, we weren’t actually doing,” said Armstrong-Fowler, who was an assistant professor of instruction in the Communication Department previous to her recent transfer to the Fashion Studies Department.

Armstrong-Fowler said when she became certified in Google Analytics, she received a virtual button from Google she was able to connect to her LinkedIn profile. She said she used the button as a resource to sell her capabilities in her career, something the Columbia Online programs did not offer.

Craig Sigele, president of the United Staff of Columbia College and academic manager for the Communication Department, said the program’s termination was expected.

“It was a pipe dream. It was too late to market; the market was already set,” Sigele said. “There were many independent companies doing similar things that we were trying to do.”

“Like all American institutions of higher education, we find ourselves in an unusually complex budgeting and planning environment,” Kim said in the May email. “Unfortunately, the pressures placed on the college’s operating budget by the COVID-19 pandemic, in terms of lost revenues and unforeseen expenses, have made this an untenable proposition. In our current operating context, I concluded that the college could no longer sustain its investment in Columbia Online.”

Kim did not respond to a request for an interview seeking more information on the termination of the program.

In his May announcement, Kim thanked “Rob Green and his team for their service to the college, their professionalism, and their efforts to build a rigorous and high-quality online program. This decision is not a reflection on them.”

Green, the now-former Vice Provost of Digital Learning, initially offered to send a written comment after the Chronicle requested an interview, but this could not be arranged as of publication.

Stanley Wearden, the provost at the time of Columbia Online’s inception and now the president of Methodist University, declined the Chronicle’s request for an interview.

The Chronicle also tried without success to interview other Columbia Online staff members.

Sigele said the terms in which Columbia Online staff—five of whom were members of USofCC—were dismissed, were better than the union is used to.

The two staff members not part of the union, whom Sigele said were in management-level positions, will not receive any severance pay or union benefits because their roles were already “well compensated.”

Sigele said he wished some workers could have been relocated to other departments in the college, as some Columbia Online staff members were responsible for introducing the Canvas learning management system, or Canvas LMS, and helping faculty switch to remote learning after campus closures.

“It’s unfortunate because the school could definitely use their expertise in … developing Canvas courses,” Sigele said.

In a Tuesday, July 21 email to the Chronicle, Lukidis said relocation to other departments was offered to two union members, but both were not interested.

While Fowler said she wished the Columbia Online program could have merged with Columbia’s more traditional degree-granting programs, she said the transition would have raised more questions than initially expected.

“When you look at a business, every headcount has to contribute to the overall profitability of that department,” Fowler said. “Absorbing these additional headcounts would mean each department, or each school, would have to figure out how to pay for those across an already stretched fiscal budget.”

In the May announcement, Kim said the decision to eliminate Columbia Online “fits into the broader context of the financial pressures placed on the college by the COVID-19 pandemic,” and he warned other cost-cutting measures could come.

“Unfortunately, these cuts alone are unlikely to allow us to achieve a responsible budget outcome; we may be obligated to engage in additional cost-reduction measures,” Kim said in the May 26 email. “The scale of any actions that we take will be driven by fall enrollment and tuition discounting realities.”