New Texas abortion law spurs action in Chicago and across the U.S. 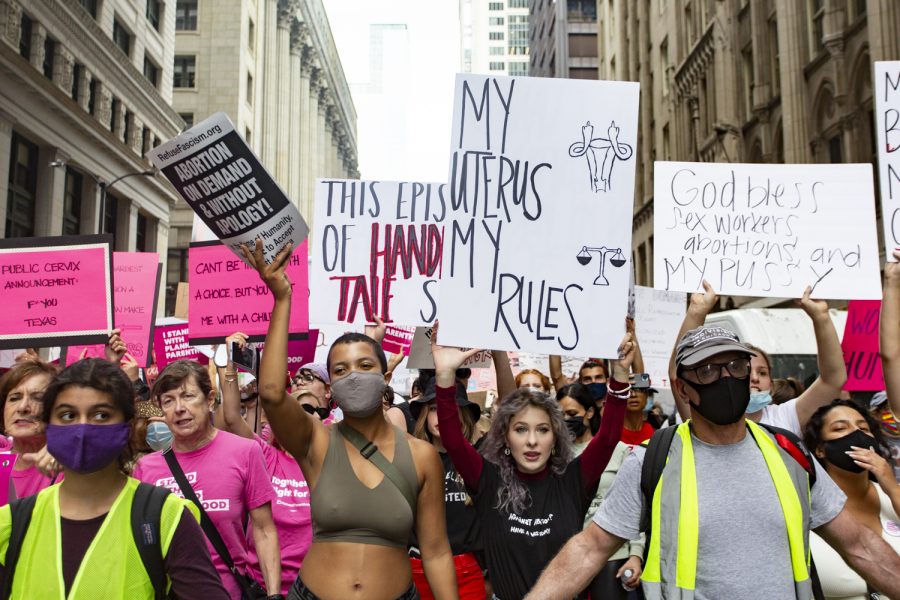 Marin Lorn and Isabelle Earl lead the march for abortion justice in Chicago on Oct. 2.

By Valentina Pucarelli and Kristen Gesicki

Just days after Texas passed a historically-restrictive abortion bill, two women from the state boarded a plane for Chicago where they could safely end their pregnancies under a medical procedure that has been legal in the United States for nearly 50 years.

Jo Greep, director of communications for Planned Parenthood Illinois, said the women’s story illustrates the impact of the new anti-abortion law, initially known as the “heartbeat bill,” which was approved last May and became law on Sept. 1.

“It’s essentially an almost full abortion ban because most people don’t even know they’re pregnant before they’re six weeks along,” Greep said in an interview on Friday. “It’s nearly impossible to get an abortion in Texas right now.”

Saturday, Greep joined thousands of other women’s rights activists at Daley Plaza as part of a nationwide protest against the new law.

“We’re really just trying to raise awareness of all that is going on to make sure people understand what is at stake,” said Greep who shared the anecdote about the two women traveling to Chicago from Texas. “This could be a canary in the coal mine.”

Women’s March and Planned Parenthood, together with other abortion-rights organizations across the country, organized the national mobilization. In Chicago, protesters gathered at Daley Plaza, 50 W. Washington St., outside of Chicago’s City Hall and marched south on Clark Street, turning onto Ida B. Wells Drive and then onto Dearborn Avenue to return to the original location. About 3,000 people attended the rally and march, according to the Chicago Tribune.

Dr. Amy Whitaker, chief medical officer with Planned Parenthood Illinois, clinical associate professor at the University of Chicago and board certified obstetrician-gynecologist, spoke to the crowd about the importance of abortion rights.

“Abortion is health care, abortion is common, abortion is normal, abortion is safe,” Whitaker said. “[Roe V. Wade] should be the floor, not the ceiling to protect reproductive rights.”

Greep said the rally also sought to bring attention to the Illinois Parental Notice of Abortion Act of 1995 that requires individuals getting an abortion under the age of 18 to notify a parent or legal guardian.

“This is sort of our last big barrier to abortion access in Illinois at this point in time,” Greep said. “Parental notification disproportionately harms young people.”

“This is not about women’s rights only, this impacts queer women, our trans and gender diverse communities and many others,” Ruiz-Velazco said. “We must come together across movements, across cultures, across communities to ensure our democratic principles are protected.”

Gabriela Díaz de Sabates, assistant professor in the Humanities, History, and Social Sciences Department, who teaches “Introduction to Women’s, Gender and Sexuality Studies,” among other classes, said marches are important because it shows the will of people when they do not have many other choices.

Diaz de Sabates said a large group of people in Texas do not have the education to know how to prevent abortion, and many others do not have the resources or opportunity of leaving their state to get an abortion due to various reasons, including financial status, race and gender identity.

“I think that trying to change legislation that prohibits people to have the right to their own bodies is just wrong,” said Diaz de Sabates, who did not attend the rally and march.

Ada Lynch, a sophomore cinema and television arts major, attended the march and said this movement is essential for equality.

“There’s no reason why people should have fewer rights because of their gender or anatomy,” Lynch said.

“The ‘Women’s March’ doesn’t speak for me or the millions of women who value human lives,” Jeanne Mancini, president of an anti-abortion group called March for Life, said in a Twitter post.

Greep said [people in Illinois] are very fortunate that choice is protected right now, but the fight continues.

“We can’t get complacent,” Greep said. “We have to keep fighting and keep working to protect abortion access where we can.”