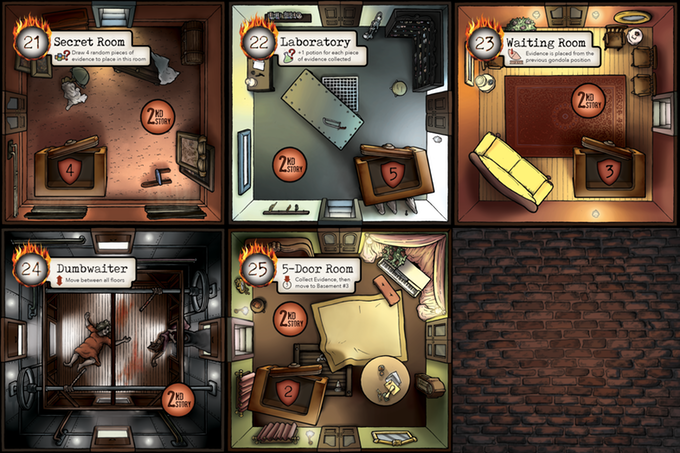 Set to the background of the 1893 World’s Fair in Chicago, a smarmy politician, a widow and four other colorful characters are looking for the same thing—to “collect on overdue promises.” After years of assisting Herman Webster Mudgett, otherwise known as H. H. Holmes, in his schemes, they are out to expose him for the crimes he has committed, no matter the cost.

The board game, “Crimes in History: H. H. Holmes’ Murder Castle” was created by Seth Cooper and Brandt Hoffman. Scheduled to be released later this year, the game follows two to six players as they make their way through the murder castle of the infamous serial killer, H. H. Holmes, avoiding greased chutes, seeping gas and booby traps.

Holmes was a serial killer from New Hampshire who moved to Chicago in 1886. He is known for the creation of a three-story hotel colloquially called the “Murder Castle,” of which only he knew the full layout. It was located mere miles from the 1893 Chicago World’s Fair. Holmes was later suspected of murdering 200 people but allegedly confessed to killing only 27. He was apprehended in 1894 for the murder of a man in Philadelphia and was executed by hanging there in 1896.

Inspiration struck for a board game after Cooper read Erik Larson’s “Devil in the White City: Murder, Magic and Madness at the Fair that Changed America.”

Founded in November 2018, Crimes in History is the first project under the Chicago-based company’s banner.

Hoffman and Cooper first started on the project in 2019 by creating homemade prototypes of the game, which included cardboard pieces as game tiles.

The pair were told by other game creators to get advice from more than just family and friends. So when they started going to conventions, they sought out feedback on what to change.

Before the final prototype was completed, Hoffman and Cooper enlisted the help of illustrator Holly Carden to create the game’s overall design. They found Carden on a whim.

“After we locked in a theme and locked down the idea for the gameplay and artwork … we needed to find an artist,” Cooper said. “We googled ‘H.H. Holmes murder castle’ and—lo and behold—was this beautiful murder castle in the exact aesthetic that we envisioned for the game.”

Carden’s illustration of a map of the interior of Holmes’ castle was uploaded on Reddit to see if people would be interested in collaborating with her, and the post went viral.

After she was commissioned, Carden documented her design process for Crimes In History, a blog where game enthusiasts and fans could see how she created characters like Adeline, or how she designed the layout of Holmes’ castle.

With the help of Carden’s artwork and an immense amount of research, Hoffman and Cooper were able to create a concrete version of the game. Although the research is ongoing, the ideas currently in the game have assisted the creators in establishing a fully-funded Kickstarter campaign.

Due to the project exceeding its goal of $27,663 within five days of the campaign, production on the project can soon begin. Additionally, Hoffman and Cooper will be able to add an expansion pack called “The Second Story.”

“What we have done … in addition to developing additional room tiles, is [add] special abilities,” Hoffman said. “It is going to allow for a lot more twists and turns when building out the castle.

The estimated release date of this tabletop game is Halloween 2020, with a tentative schedule on their Kickstarter campaign to keep supporters engaged. Currently, the game’s retail price is $49 on Kickstarter, but higher pledges will receive the expansion pack and other perks.

Because of the hype from the Kickstarter, Hoffman and Cooper were recently invited to demonstrate Crimes in History at the Chicago Comics and Entertainment Expo on Friday, Feb. 28 and March 1.

“We are gamers trying to provide a game to people that will enjoy playing as much as we did creating it,” Hoffman said.