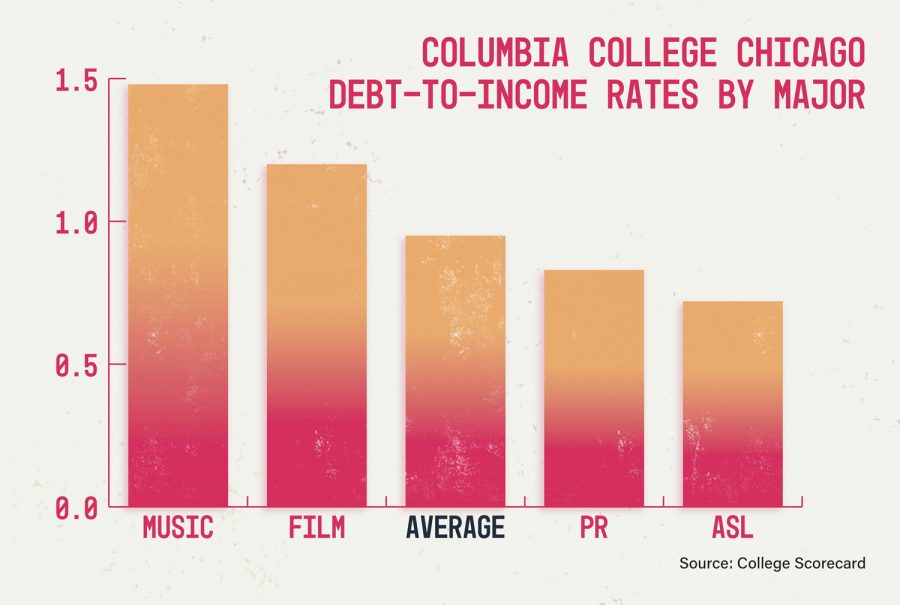 Reese Okuwobi was not sure what she had gotten herself into regarding student debt until she was already in the thick of it.

Okuwobi, a senior marketing major, said as a first-generation college student in U.S., the abundance of information regarding student loans was difficult to decipher, and she was not thinking at the time how she would be able to pay them off.

“I don’t want to have to graduate [from] school and just get any kind of job to be able to pay for school as opposed to doing something I really care about,” Okuwobi said.

Based on recent major-specific data for student loans on the Department of Education’s College Scorecard database, student loan experts created a debt-to-income ratio, a metric that can show prospective students how much debt they are likely to take on and how easy it will be to pay off.

Debt-to-income, or DTI, is calculated by dividing the median student debt at graduation by the median income of someone working and no longer enrolled six years after starting school, including those who did not earn a degree.

Ideally, the income is higher than the debt owed, creating a DTI of less than one, said Matt Carter, editor of Credible Insights and creator of 71 Illinois college rankings based on DTI.

“The main purpose of this analysis was to get students thinking about how much debt they’re going to take on,” Carter said.

In comparison to Columbia’s DTI, in which a lower number is more ideal for students, locally the School of the Art Institute of Chicago had a DTI of 0.99. Loyola and DePaul, both private colleges, had DTIs of 0.59 and 0.47 respectively. Nearby public schools, the University of Illinois at Chicago and Northeastern Illinois University, had DTIs of 0.44 and 0.46 respectively.

Carter said DTI is a “crude calculation” and should be treated as a jumping-off point for further research. It is also helpful in determining how easy or difficult it will be to pay back loans—something many do not think about, he said.

Okuwobi said she wants a job in fashion after graduation, though the narrow job market now made smaller by coronavirus-related economic turmoil may make this career path difficult.

But the future looks different for some students, Carter said. Just 48% of students at Columbia graduate within eight years of enrolling for the first time, according to College Scorecard data. In the calculation of the college’s DTI, the salaries of students without degrees are also taken into account.

“Something to think about before you get to a school is how good are they at helping students get through to the end,” Carter said.

Columbia’s Vice President of Enrollment Management Michael Joseph did not respond to requests for an interview on how this data may impact enrollment as of press time.

The stress of debt can affect a student’s path to graduation. Charlie Wacholz, a junior multimedia journalism major, said looming debt burdened him during his freshman year. He said impending loans impacted how he made his course schedule, leading to him taking the maximum number of credits possible to get his money’s worth and to put him on a path to graduate on time.

Wacholz said he has found Columbia’s Career Center to be a helpful tool for students looking for careers in the arts by connecting them to paid internships and other job opportunities. The financial offices also inform students about debt and payback options, he said.

“Columbia has some pretty strong resources for helping you get some semblance of financial stability,” Wacholz said.

Staff in Columbia Central, in which counselors work with students through the full enrollment process including the financial aid process and related paperwork, did not respond to requests to be interviewed for this story.

Carter said there are several programs in place to help former students who are saddled with debt. For federal student loans, the income-driven repayment program looks at how much students can actually afford when setting payment amounts. Higher-interest loans can be refinanced through private firms, he said.

Due to the coronavirus pandemic, federal student loan interest rates will drop to their lowest point ever for the 2020-2021 school year starting July 1, according to Credible—from 4.53% in 2019-2020 to 2.75%, which could save undergraduate borrowers an average of $700 in total interest, Carter said.

Carter said students should try not to borrow more than what they think they can earn in their first year after graduating.

“You can’t just look at the total amount borrowed in a vacuum,” Carter said. “It’s really important that students who get their degrees are generally able to repay their student loan debt.”

Okuwobi said she wishes this data had been available when she was comparing colleges, because these numbers would have played a larger role in her search. She also wishes someone had been there to guide her through the student loan process with an eye toward the future.

“I knew I would have [debt] to pay off, but I was also thinking that I could get a really good job,” Okuwobi said. “But knowing the averages don’t really work out like that is crazy.