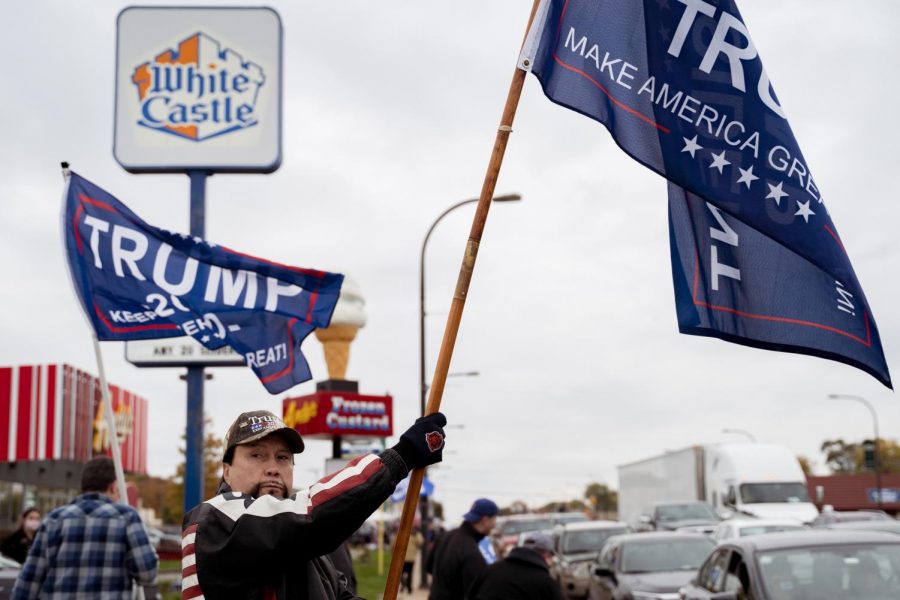 Edward Melkonian, an Orland Park resident, waves a "Make America Great Again" flag in front of a White Castle before a police car comes to control the protests.

In the background, a parody of the Village People’s “YMCA” played over the speakers, replacing the chorus with “M-A-G-A.”

The Trump supporters gathered in the parking lot of White Castle at the intersection of 95th Street and South Cicero Avenue along with a caravan from Lyon, Illinois, on Sunday, Oct. 25.

Across the street from the Trump rally, a group of five counterprotesters waved flags for Joe Biden, an anti-Trump flag and the Mexican flag. Many people in cars passing by shouted the F-word at Trump supporters and raised their middle fingers.

Catherine O’Shea, who identified as a Democratic Party supporter prior to the 2016 presidential election, organized the Trump rally. O’Shea said she changed parties when she saw “where the country was going” with “anti-American activities.”

O’Shea said she blames Gov. J.B. Pritzker, along with other Democratic politicians, for shutting down businesses that affect many families during the pandemic.

“That’s against our liberties … and then it’s a domino effect,” O’Shea said. “It affects the worker; it affects the landlord of where the business is; and it affects the taxes. We definitely need Trump because he has done so much already for every demographic and imagine what more he’s going to do.”

Devin R. Jones, committeeperson for the 18th Ward Republicans—a committee to assist Republican candidates—was one of the few African American supporters at the Trump rally.

Jones began supporting Trump shortly after the 2016 presidential election because of Trump’s preference to appoint “originalist justices” and give funding to Historically Black Colleges and Universities, or HBCUs, he said.

According to Politifact, there has been no significant difference between the funding given to HBCU’s under Trump’s administration in comparison to the previous presidential administration.

“I don’t think that just because someone’s a Trump supporter, that they should automatically be looked at as racist,” Jones said.

He said the Black Lives Matter movement opposes the government, which in many instances is comprised of politicians who are similar-minded and not all Republicans or Trump supporters.

O’Shea said she agrees that Black lives matter, but the sentiment is being “infiltrated” by the Black Lives Matter organization that has done “nothing” for the Black community and is a “domestic terrorist group.”

However, Jay Murillo, organizer of the counterprotest in Oak Lawn, said Trump is dividing the nation and separating all ethnicities.

“We feel like they’re trying to silence our voices, and we’re expressing our opinions as well,” Murillo said. “A lot of the Latino and Hispanic community … they’re not as well represented as they should be, so I think we should help everyone get out there and vote.”