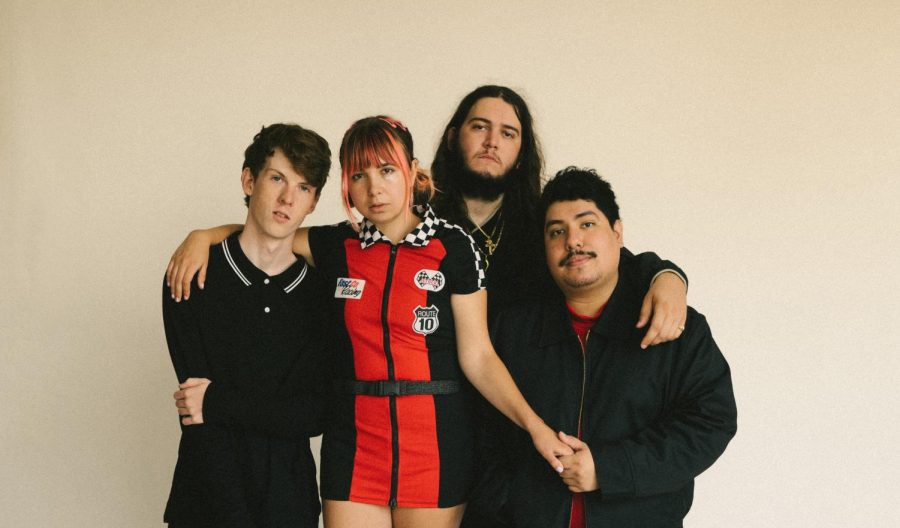 Editor’s note: This article is one in a series of stories from the Communication Department’s award-winning Echo magazine,  featured this summer on the Chronicle site.
_____________________________________
Sitting criss-cross on her bed with a guitar resting gently on the blankets next to her, Lili Trifilio scribbles on a piece of paper, her fingers clenching a pen as it glides across the page.

For months, Trifilio “went crazy” making beats in the seclusion of her childhood bedroom, which led to her solo project under the name tiger lili. The project itself blossomed from lyrics Trifilio had already written but felt did not have a place in indie-rock group Beach Bunny’s discography, which she is the lead singer of.

“[tiger lili] is my alter ego,” Trifilio says with a laugh. Character, persona and aesthetic have always been closely tied to her work; each project has its own story.

When Trifilio decided to release the solo project, she immediately contacted her record label, Mom + Pop Music. Vice President of A&R Suzanna Slavin remembers being excited to see an “ever adapting side project that is limitless in terms of its nature.”

“[Trifilio] is an incredibly prolific songwriter and musician,” Slavin says. “She’s so inspired by so many different genres. This was kind of an outlet for [Trifilio] to really start to experiment.”

Trifilio leans on the sudden spurts of inspiration she gets to write, whether it be lyrics, poems or other random thoughts. These moments of frantic scribbling come from one place: deep reflections of emotions and writing for herself.

This past year, Trifilio experienced shocking emotions, such as rage that forced her to spend hours in self-reflection.

“I was really angry for a period of time, which I think was good because I don’t think I had experienced anger in that sense,” Trifilio says. “I feel like I came out of that feeling very at peace. I kind of had to go through all of those processing emotions.”

Once lockdown began in March 2020, Trifilio left her Chicago apartment and headed home to live with her family, isolated from others due to her father’s age and her brother’s health.

After moving out after ending a West Coast tour with Beach Bunny for the release of their album “Honeymoon,” Trifilio felt as though she was failing. But looking back, she finds comfort in knowing going back home was the best thing to do in terms of safety and having the space to be more creative.

Without seeing or playing with her band for nearly three months, Trifilio put all of her energy into mastering the art of producing music on her brother’s MacBook.

“I definitely had no production experience whatsoever,” Trifilio says. “I was [initially] just messing around, but it started becoming very obsessive, where I would do it maybe eight or nine hours a day.”

When performing with Beach Bunny, Trifilio is authentically herself, with elaborate elements like colorful bandages randomly placed on her legs, sporty shorts and retro roller skates that feed into a character appeal. But tiger lili has a backstory of her own: a girl from the future who sends songs back through time to get in touch with a friend. For Trifilio, making her projects character based gives her the space to create an exaggerated sense of her emotions.

In 2015, Meghan Boyles was introduced to Trifilio as “conspiracy theory Lili” during their freshman year at DePaul University because she was known for posting conspiracy theories on the DePaul Class of 2019 Facebook page. Since then, the two have lived with each other three separate times.

Boyles would hear Trifilio play music in her room constantly, and their apartment was typically filled with scattered notebooks with lyrics. Boyles had the pleasure of witnessing the first ever Beach Bunny practice in her third floor apartment’s living room.

“They had band practice at least three or four times after that, and by the second or third time I had the neighbors texting me like, ‘Can you please tell your roommate to stop?’” Boyles says.

Despite the pandemic, Beach Bunny found the space to record and release the EP “Blame Game” in January 2021, which was a direct byproduct of the anger and heavy emotions Trifilio experienced last year. The songs are the inner workings of toxicity in relationships and a pattern of self-blame — the space to reflect on herself and her relationships are the reason for the powerful lyrics featured in the songs.

Trifilio is no stranger to writing about personal relationships, but for the first time she used anger as a tool to understand and treat herself better, as well as releasing it for others to connect to.

Trifilio uses her platform and growing presence in the music industry by supporting other women through body positivity and breaking down the structures of rape culture.

“The privilege of having a platform—I definitely want to use my voice to do some good in the world,” Trifilio says. “I gravitate toward helping other women who may have experienced similar things as me.”

As the frontwoman of a rock band, Trifilio has been thrust into the public eye and because of that says it’s nearly impossible to not be critical of herself and her work, but she has found it is vital to solely write for her own enjoyment and to process emotions and then worry about how it may be perceived.

After the release of “Blame Game,” which Slavin says was born out of quarantine, Trifilio is now hustling for more studio time. Because she’s working in a small studio, there’s a lot of trust involved regarding COVID safety.

Trifilio says the past year has been an inspiration to develop and get more creative with her work.

In between scrawling down lyrics and adding chords to melodies, Trifilio continues to find an escape in electronic pop songs, channeling the raw parts of herself into a new creative endeavor.
_____________________________________
The 2021 issue of Echo will be available this summer on newsstands across campus, and PDFs of all issues are available online.