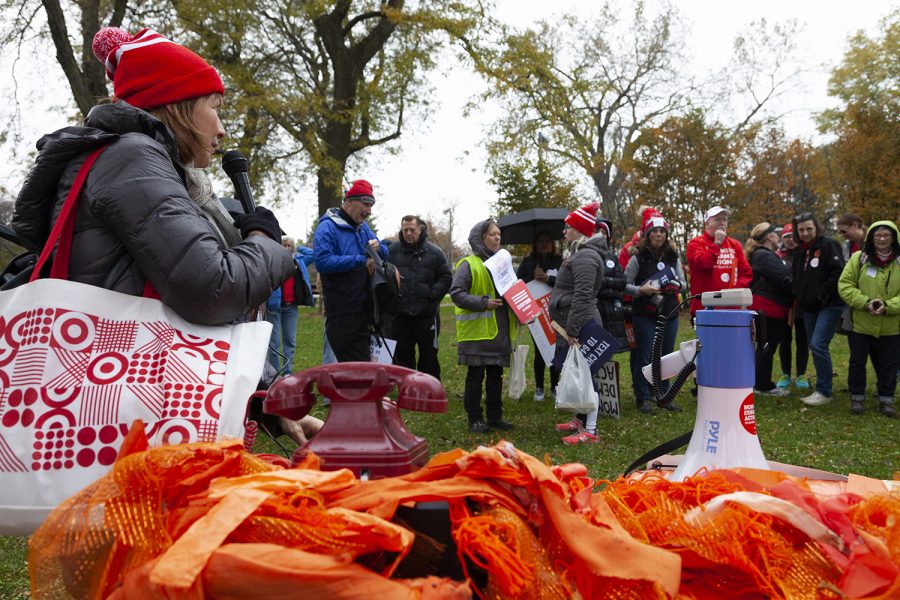 A group organized by Moms Demand Action For Gun Sense in America journeyed from Hammond, Indiana, to Chicago Saturday for the March to Illinois. The march highlighted the issue of cross-state gun sales as marchers demanded the U.S. Senate pass legislation that would expand federal background checks.

The implementation of these requirements would help save lives by slowing the flow of guns coming into Illinois from other states, according to Moms Demand Action.

“There’s so many loopholes. H.R.8 is designed to close those loopholes,” said Valerie Burgest, volunteer with the Illinois chapter of Moms Demand Action. “All states would have to come up with a mechanism to look at how they can do background checks on all gun sales—not just in gun shops, but all gun sales.”

Before the march began, the group participated in the Schools Say Enough Sidewalk Challenge, an interactive art piece consisting of 13,000 pieces of fabric, each representing a child lost to gun violence in the U.S. since Sandy Hook in 2012.

Moms Demand Action marched north on Calumet Avenue for what was expected to be a 3.6 mile hike in the rain across the Indiana-Illinois border to Calumet Park in Chicago.

After 0.8 miles of marching, a bus met the marchers and transported them to Calumet Park in Chicago.

“We’re talking about guns, but we’re also talking about trauma,” said Brenda K. Mitchell, state legislative lead for the South Suburbs chapter, during remarks after the march. “I left a 30-year career because of the byproduct of gun violence, which is trauma. Our communities are suffering because of trauma.”

The march began in Indiana to emphasize the fact that about 21% of recovered firearms that land in Chicago come from Indiana, according to the 2017 Chicago Gun Trace Report, which used data collected between 2013 and 2016.

Indiana only requires gun dealers to possess a state-issued license when selling handguns. There are no state laws requiring a dealer to initiate a background check before transferring a long gun, according to the Giffords Law Center, a gun violence prevention group.

Along with requiring gun dealers to have state-issued licenses in order to sell any type of gun, Illinois also has laws that require permits to purchase firearms and ammunition, owners to report lost and stolen weapons within 72 hours, as well as gun show and private sale background checks. The “gun show loophole” does not apply in Indiana.

“Indiana is so close,” Burgest said. “We feel that if we can highlight the problem of illegal transport, or illegal trafficking of guns from Indiana into Illinois, that’s a start.”