‘Men Are From Mars, Women Are From Venus’ blends psychology and comedy 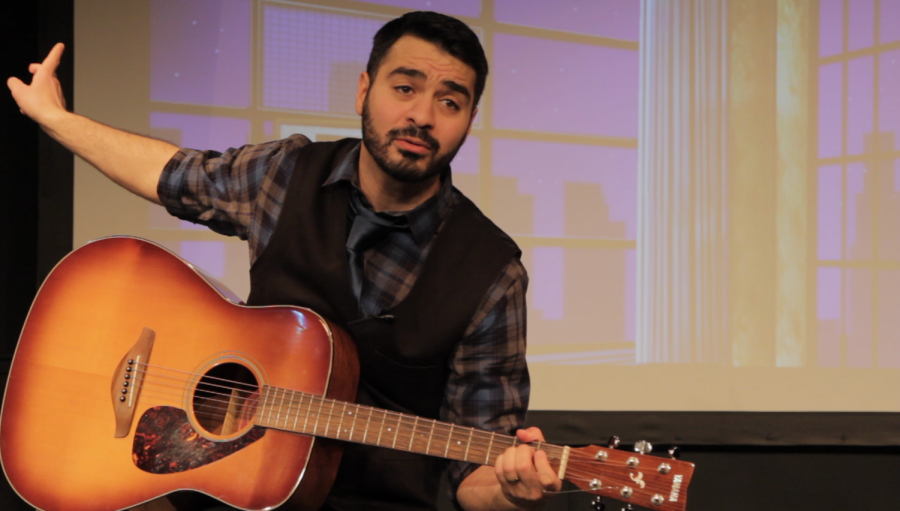 Amadeo Fusca leaps back and forth on-stage, portraying both himself and his wife in different vignettes of their marriage. In one story, he waits impatiently to get in the car while his wife frantically deliberates over the right pair of shoes to wear. This elicits several hearty laughs from the audience—particularly from older couples.

“The longer you’ve been in a relationship, the more you appreciate the show,” Fusca said in an interview with the Chronicle.

The one-person show, “Men Are From Mars, Women Are From Venus – Live!,” stars Fusca as the audience’s “Martian” guide, leading them through a series of lessons on the different ways women and men see the world. Because he incorporates elements from his own marriage, Fusca said the audience can see themselves in the anecdotes he tells.

Fusca also uses his background in improvisational comedy to change the show to fit particular audiences.

“That just makes the show so much more of a fun experience for me and everybody else,” Fusca said.

Blending psychology and comedy to teach audiences how to be more understanding of their romantic partners, the play is based on the 1992 book “Men Are From Mars, Women Are From Venus,” written by relationship counselor John Gray.

The book’s thesis is that common disagreements between heterosexual couples can be explained by the ways male and female brains work. This is explained through a repeated metaphor that men and women are from different planets, and that “Venusians” aka women, and “Martians,” aka men, have fundamentally different needs. In the book, Gray writes that if both partners attempt to understand the other’s thought processes, they can have a happier and healthier relationship.

Several times throughout the show, Fusca leaves the stage and a video of Gray takes over. With the help of a computer-animated husband and wife, Gray employs the Mars-Venus metaphor and urges people in relationships to be more open and understanding.

Call-and-response is a big part of the performance, as throughout the show, Fusca pointed to two large paintings of a faceless, naked woman and man and had the audience chorus back the genders’ respective needs. The chant for women was “Attention and understanding,” while the chant for men was “Trust and approval.”

Fusca, however, recognizes that a book about relationships from 1992 can feel dated in 2020, especially to younger audiences. But he added that its basic tenants can still apply to any relationship.

Because the show has been touring across the United States since 2013, Fusca said he tries to freshen it up with local references. For instance, the Chicago experience included references to Portillo’s beef and having sex underneath the Bean.

“Men Are From Mars, Women Are from Venus” played at the Broadway Playhouse at Water Tower Place, 175 E. Chestnut St., from Sunday, Feb. 9 until Sunday, Feb. 23, and continues to tour the United States.