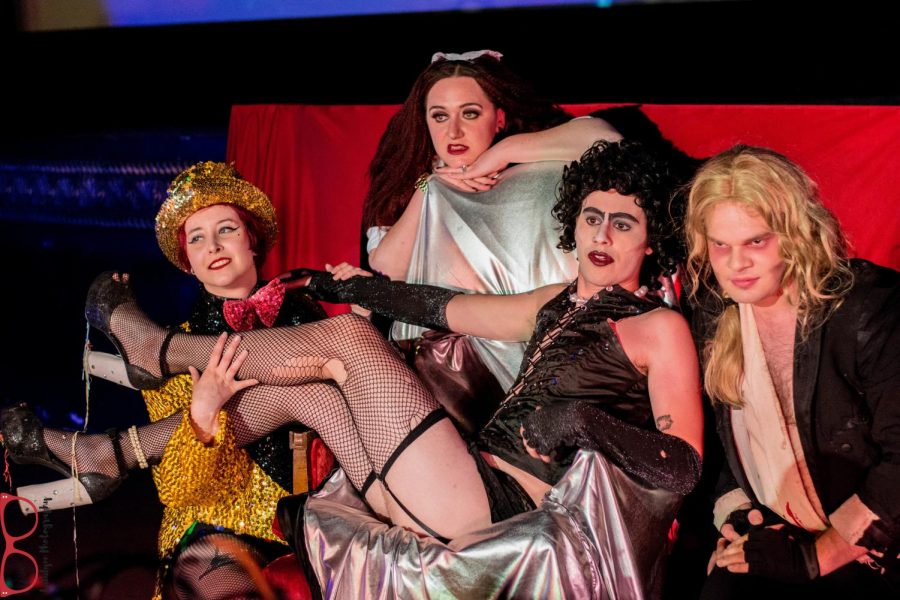 In 1990, 15-year-old Chris Siuty was a “Rocky Horror Picture Show” virgin. After seeing the show, they were hooked. Now, as a 44-year-old applications engineer, Siuty spends one or two days a month as a singing motorcyclist in their part as a volunteer cast member for the Music Box Theatre’s monthly rendition of the cult classic.

Rocky Horror is a 1975 sci-fi, rock ‘n’ roll horror parody film starring Tim Curry, who plays Dr. Frank-N-Furter, a self-ascribed “sweet transvestite from Transsexual, Transylvania” who sings and brings a male sex-symbol, Rocky Horror, to life one fateful night. Since the film’s release, it has gained a cult-like following of people across the nation who reenact the movie for heckling, dancing, singing and toilet-paper-throwing audiences in front of the screen as it plays in the background.

For years, Siuty has been performing the role of Eddie—an ex-delivery boy and ex-lover to Dr. Frank-N-Furter who meets a dreary end. Despite that, they never studied theatre and do not consider themself an actor, which they said is the case with many Rocky Horror participants.

Without formal training for their roles, cast members take it upon themselves to learn and perfect the part as they see fit. Marnie Thompson—who plays the role of Janet, a sexually-frustrated newlywed who winds up at Dr. Frank-N-Furter’s mansion by mistake—said she watches the movie over and over again to become confident in her part, since the actors lip-sync and mimic the movie as it plays behind them on the screen during their performance. Much of the performance goes “off the books,” Thompson said, as the cast will play off each other’s characters.

Like many others in the Rocky Horror community, Thompson started out as an audience member, and when the Music Box Theatre, 3733 N. Southport Ave., held its audience night in December 2018, she took a swing at becoming part of the cast. She has been on board ever since, with the mission to provide people with the same thrilling experience she had her first time.

“It’s kind of humbling to be part of this,” Thompson said. “It’s a really rewarding experience.”

While the show has a special hold on anyone who has seen or performed it, Thompson will always remember the first time she acted the song “Over at the Frankenstein Place” last year. The entire audience took out glow sticks and waved them in the air while she walked through the aisles as Janet.

For Siuty, Rocky Horror became a pivotal aspect in their life. The show became more than just a fun pastime, but also a place where they formed close relationships, including with their now-wife, who joined the Rocky Horror cast in 2004. It becomes a place where people grow together and figure themselves out, they said.

“We’re all volunteers. We’re doing this because we love it,” Siuty said.

While Rocky Horror is unique in and of itself, Siuty said the cast is also very conscious of each other’s identities and celebrates the differences among them.

“We’re a safe space for people who are gay, lesbian, bisexual, pansexual, trans, non-binary, punks, goths or AV nerds,” Siuty said. “Anybody who feels like an outsider, they’re welcomed there.”

People go to Rocky Horror for different reasons, and Siuty wants there to be a sense of community where people can go and express themselves.

“The cast [alone] isn’t Rocky Horror. The audience, the community that makes up all of these things is Rocky Horror,” Siuty said.

In their own pre-show tradition, the Music Box’s “Rocky tribe” will take shots of Malört liquor together before taking to the stage.

Unlike other more mainstream theatre productions, cast members for Rocky Horror provide their own costume and makeup, also making the “virgin kits”—a prop bag available for audience members to buy and interact with during the performance. All proceeds from the $3 kits go toward props, more kits, costumes and promotions. Since the cast is not paid for their performances, Dylan Sowle, who has been at the theatre since 2015 in the role of Dr. Frank-N-Furter, said it is a testament to just how much the cast cares.

Sowle referred to the cast as a “fun, weird family” where everyone is trying to put on the best show possible.

“There’s not really anywhere else, or any other movie or performance that’s exactly like this,” Sowle said. “It’s been going on for decades, and somehow people are still wanting to show the same movie and do these goofy things once a month or more.”