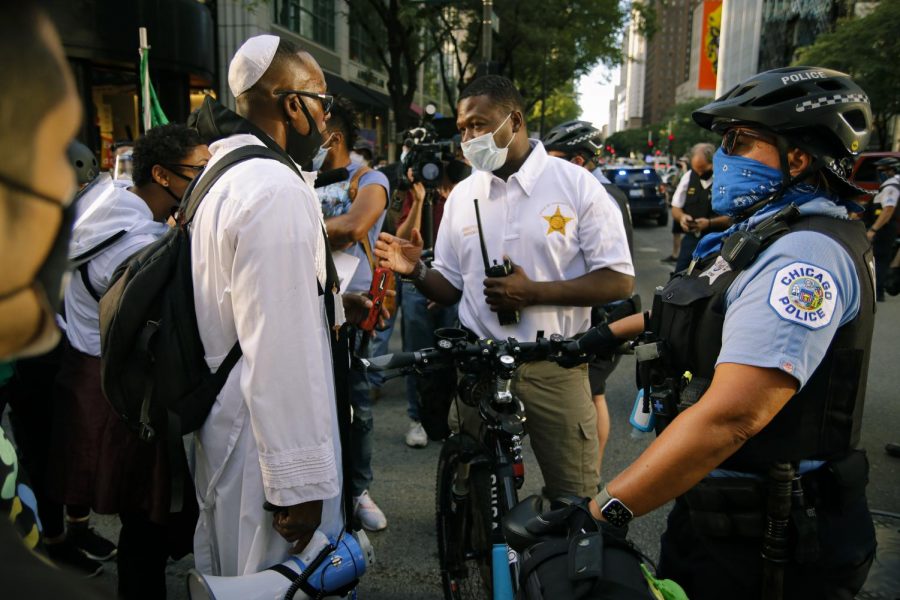 Yosef negotiates with CPD Director of Public Engagement Glen Brooks to allow protesters at the corner of East Ohio Street and North Michigan Avenue into the street.

White signs tied in a row on a long string swayed in the wind with the names of Black and Brown Americans killed by police officers.

The signs were created as part of a protest meant to shut down the Magnificent Mile Saturday evening, Aug. 29. Michigan Avenue, known for its high-end retail, was temporarily blocked off, and protesters held a candlelight vigil for parents who have lost their children to police violence.

Organized by Rabbi Michael Ben Yosef, the president of Tikkun Chai Inter-National, a humanitarian organization advocating for human rights for all people, the brief protest kicked-off at the Wrigley Building, 400-410 Michigan Ave., beginning with a sweeping eulogy for Black lives lost across the U.S.

“Today, this is going to be a celebration of a eulogy, of all this death around me,” Yosef said. “Not to loot. What’s lootin’ gonna do for you guys? Can’t bring ’em back.”

Yosef invited Lisa Simpson, who lost a loved one at the hands of the police, to speak Saturday.

Simpson’s son, Richard Risher, 18, was shot and killed by police on a sidewalk on July 25, 2016, at the Nickerson Gardens public housing project in Los Angeles. His name was one of 800 written on the white posters that were carried down the street.

According to an autopsy report, the officers fired a total of 64 rounds, but ultimately, Risher died from one shot to the back, as reported by the Los Angeles Times, June 27, 2017.

One officer was shot and wounded in the arm by Risher, according to the Los Angeles Police Commission. The officers involved were later cleared of any charges by a 4-0 civilian panel vote.

Los Angeles Police Department Chief Charlie Beck and the board agreed two of their officers violated some of the department’s tactics during the incident.

“My son was 18 years old when the pigs killed him,” Simpson said during a speech at Saturday’s protest. “They not here for us, so we got to stop thinking that when they say ‘protect and serve’ on the side of their car that [it is] for us.”

When an officer kills a Black man, she said the system is set up to prevent families from getting justice because it is about money and preserving officers’ jobs.

Simpson said police are not needed in the Black community because they have strong women and men who can police themselves.

“Every time you mourn for one child, you turn around you gotta mourn for another,” she said.

After speeches concluded, protesters marched north on Michigan Avenue to Ohio Street, where they were greeted by a standoff with a line of police officers and their bikes. Protesters eventually headed back toward the Wrigley Building for a candlelight vigil.

Vic Resendiz, an activist with the Chicago Activist Coalition For Justice, a humanitarian organization that partnered with Tikkun Chai Inter-National, said despite tensions with officers during the short protest, it was important everything remained peaceful because violence would only inhibit their goal of seeking justice.

“We can yell at the cops; we can yell our injustices; we can yell our own passion; but we cannot pick up a rock and throw it [through] the window and break [it] because that hinders our process,” Resendiz said. “They arrest us, and then we ended up in their hands.”

Once protesters reached State Street, Glen Brooks, director of public engagement for the Chicago Police Department, ordered them to get back on the sidewalk or face possible arrest.

No arrests were made during the protest according to a tweet from the CPD after protesters dispersed around 9:15 p.m.

“We showed a lot of people what we can do, and we showed [Glen] Brooks that we have the people,” Resendiz said. “We might have not shut it down this time, but we’re probably going to come back. We don’t care. This is for our lives.”