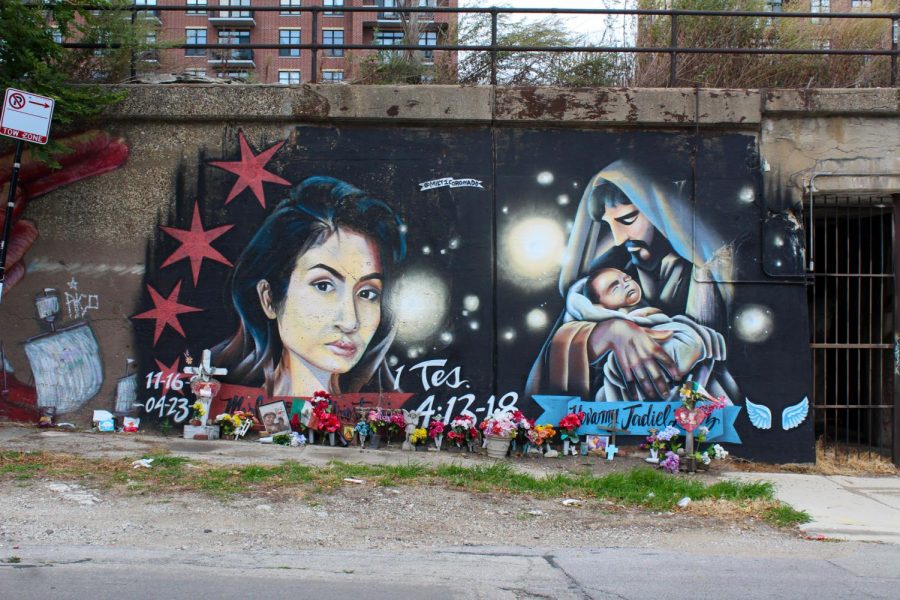 Marlen Ochoa-Lopez lived in Pilsen after immigrating to the U.S. She and her baby Yovanny Jadiel Lopez, who were both murdered, have a mural commemorating them, decorated with fresh flowers and a wooden cross for the two.

Near the intersection of West Cullerton and South Loomis streets in Pilsen, a tree serves as an altar for Johnny Vasquez, who was killed in a drive-by shooting the night of Feb. 13, 2009.

“[Growing] up he was my best friend before he passed away,” said Christian Vasquez, Johnny’s younger brother. “I still think about him a lot, and I’m in denial that he’s gone … now that I have kids it hits me more because they would have had a good uncle.”

Around 1 a.m. on Valentine’s Day in 2009, Johnny Vasquez passed away at the University of Illinois-Chicago Hospital from his gunshot wounds. He was 16 years old at the time.

Later that morning, an altar for Vasquez was set up by one of his friends, which has been maintained by the local residents for more than 11 years.

Since then, the altar for Vasquez has been decorated every year on his birthday — July 22 — and Valentine’s Day, when Vasquez’s family and friends gather to fill the site with balloons tied to the white fence surrounded by lit candles placed on the sidewalk.

But this tragedy is not a unique incident.

Altars, vigils, shrines and memorials are scattered across Chicago on the sidewalks of city intersections, alleyways, sign poles and fences.

They serve to commemorate and memorialize an individual and often mark an area of tragedy, and they are prevalent across the city’s West Side.

“I see those everywhere,” said Jeff Abbey Maldonado Sr., organizer for the J-Def Peace Project. “I see those in random spots where I know there’s hot activity.”

Maldonado Sr. began J-Def, a youth-based organization, after the death of his only son, Jeff Maldonado Jr., who was shot in the head on West 18th Street and South Blue Island Avenue while on his way to his first live music performance in 2009.

Commemorations to people who have lost their lives on the West Side often take on a grander form.

Through J-Def, a permanent mosaic often referred to as the “Pilsen Wall of Honor,” located on West 18th and South Paulina streets, commemorates Maldonado Jr. and other Pilsen community members. Maldonado Sr. said the wall was created in the summer of 2014 by him and 30 high school students in Pilsen.

“Sometimes we see a mural … there’s different forms,” said Moises Moreno, executive director of the Pilsen Alliance. “It’s … one of the ways I think folks express their grief in the community — it’s through [those murals].”

Maldonado Sr. believes these forms of public artwork are a necessity for community members as an emotional outlet and as a method of capturing the neighborhood during a particular period in its history.

“Pilsen has already changed,” Maldonado Sr. said. “Anybody can walk down 18th Street … any time of day or night without an issue. It’s almost like this is a whole other planet, like, ‘How [did] all these people get killed over here? I don’t feel threatened.’ But that’s a … failure to see what’s been paved in order for people to feel comfortable walking down 18th Street anytime.”