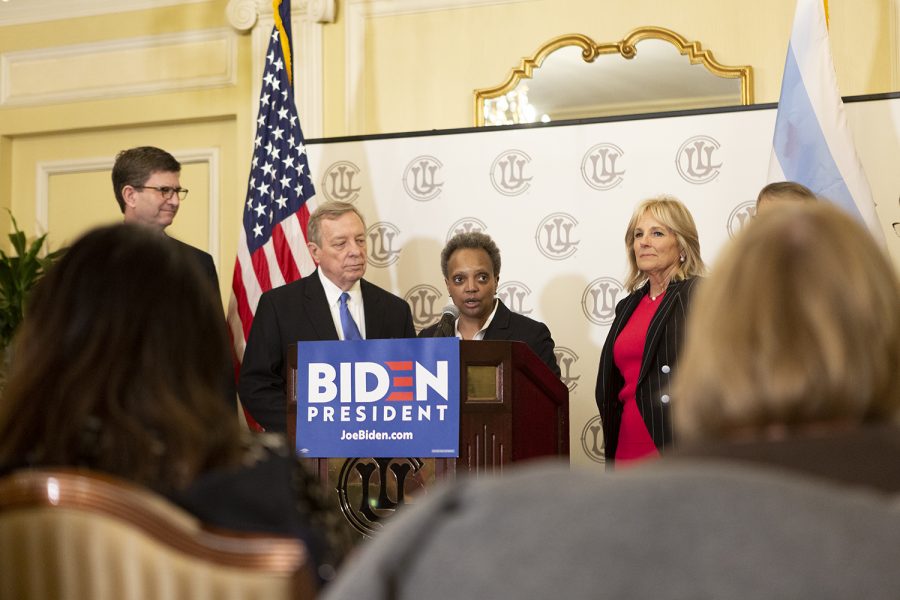 By Mari Devereaux and June Keating

“What impresses me is how Joe Biden has turned his pain into empathy and purpose—qualities that every great leader needs and are profoundly missing in this White House,” Lightfoot said during a Friday, March 6 press conference.

Standing beside Biden’s wife, Jill, Lightfoot and Durbin declared their support for the former vice president in the 2020 Democratic primary at the Union League Club, 65 W. Jackson Blvd.

Lightfoot cited differences between Joe Biden’s values and those of the current administration as reasons for her endorsement, praising his stances on diversity, healthcare and criminal justice system reform.

She said his message of unity is needed to heal the divisions caused by President Donald Trump’s support of “hateful speech” and “violent actions.”

During the conference, Jill Biden thanked supporters for coming together and embracing her husband’s candidacy.

“Joe has always said what unites us is more powerful than what divides us, and we can’t move forward unless we do it together,” Jill Biden said. “The coalition we have built is a testament to that truth.”

“[Joe Biden’s] going crazy,” Nelson said. “People endorsing him is a bad idea, personally. That’s probably a popular opinion at Columbia because a lot of people here are very invested in things that contribute to our future like paying attention to climate change, student loan forgiveness [and] health care.”

Senior advertising major Derian Silva said he was surprised to learn of the mayor’s endorsement because he thought Sanders’ values aligned more closely with Chicago voters.

“Biden? Really? F–k,” he said upon first hearing of the endorsement. “I don’t exactly understand Biden’s policies, but judging from his track record it seems out of touch, especially with what Lightfoot was campaigning [for] initially.”

Others, such as Matthew Doherty, an assistant professor of instruction in the Design Department, were more supportive of the endorsement.

“It’s nice to see the field consolidating,” Doherty said, in reference to the more than a dozen candidates who have cycled through. “It makes things a little bit easier to digest. It’s been a little bit chaotic and a bit exhausting to keep up.”

Liam Jennings, a sophomore filmmaking major, said he isn’t opposed to the endorsement, but fears Democrats will fail to unite behind one candidate and defeat Trump in the general elections.

“Regardless of who it is and how you feel about them, either one of them would be better than Trump,” Jennings said, “and we need to throw our support behind that person.”

In qualifying his endorsement, Durbin emphasized Biden’s focus on lower- and middle-class Americans.

“America needs a president who understands that most Americans worry more about the supermarket than the stock market,” Durbin said. “Families struggling paycheck to paycheck need a leader who remembers them every day. Joe Biden will be that president.”

While the presidential field is no longer as diverse as it once was, Lightfoot said Biden is the best remaining option.

“I believe there will be a time—and it won’t be long—where we will have a woman president, but the field is narrow,” Lightfoot said. “Our choices are in front of us, and Joe Biden is the one to lead the charge to defeat Donald Trump.”