‘It makes me feel wanted’: Campus group gives Black women a place to be themselves 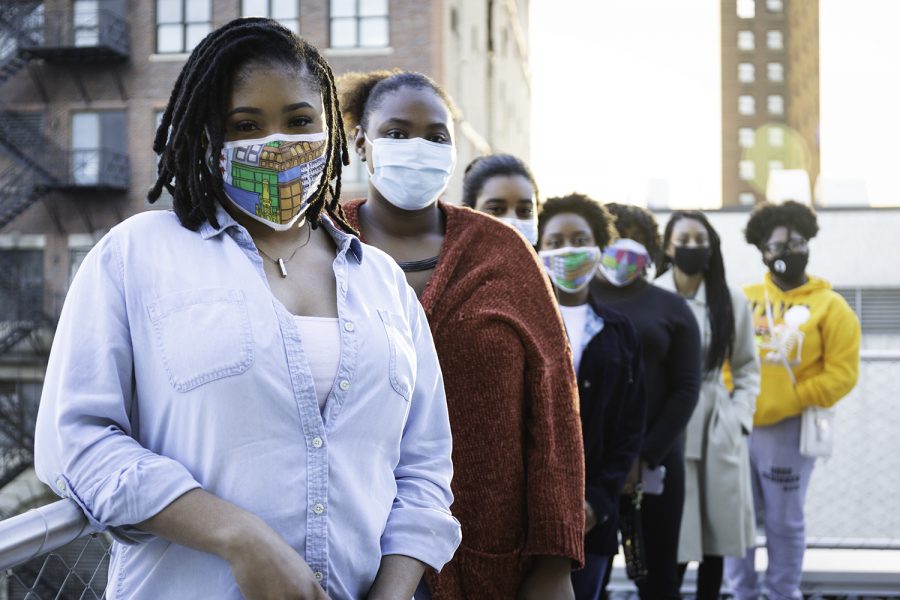 Leah Tolliver (front left), a sophomore film and television major, created the Soul Sisters group to establish a community for Black women on Columbia’s campus. She hopes to cement their group as a permanent fixture of Columbia, even after she graduates.

When Delaney Fisher transferred to another high school a few years ago, she thought she would have a better experience.

But in a school of 3,000 students in the south suburbs, Fisher noticed she was only one of around eight Black students, and she would go on to experience racist behavior she had never been exposed to before.

By the time she attended Columbia, the freshman film and television major was happy to have a space on campus to make Black women feel welcome and part of a community.

Soul Sisters, a new organization at the college, was created by sophomore film and television major Leah Tolliver after she struggled her freshman year in her personal life and did not find school services that connected or related to her issues.

“I felt it was important to establish a sense of community for Black women on Columbia’s campus,” Tolliver said. “So instead of waiting for someone to make that happen … I decided to make it official, and create an actual student organization for it.”

Tolliver noticed that other institutions her friends were attending and the college where her mother works had support groups and communities for Black women.

“I feel, especially with everything that’s going on in the world now, this is something that we need,” said Tolliver. “If you even think about the Breonna Taylor case, this is a very trying time for Black people and Black women specifically. I felt it was time Columbia had that community.”

While Columbia has had similar groups in the past, Tolliver said her main priority is ensuring members of Soul Sisters have a base to remain connected after they graduate.

“I want this to be something that continues to grow and continues to thrive within the community,” Tolliver said.

When Tolliver first made a post on the now-defunct ColumbiaChi App, she did not have any expectations but soon received a large response from Black women on campus interested in learning more about the organization. Two days after she made the post, Tolliver said she was contacted by nearly 30 women who wanted to get involved.

Tolliver said those interested in Soul Sisters wanted to “dive right in” and get started on events and workshops, but they had to reconsider meeting in person because of the pandemic.

This semester, meetings have been held over Zoom, and everything is mostly virtual at the moment to make sure everyone is staying safe. The organization has plans to create future workshops on topics of mental health, female empowerment and the importance of being an independent Black woman.

Jordan Dawson, a freshman creative writing major, first heard about Soul Sisters through a friend on Snapchat and wanted to join because she had not heard about any other organizations that offered the communal interaction that Soul Sisters does.

“It makes me feel wanted because it was hard to find a community,” Dawson said.

Dawson said she was used to “being the odd one out” in high school, as one of the only Black girls in the classroom.

“It is hard to find a community now because it seems like they’re trying to separate everyone in a way,” Dawson said. “Every institution should have a place where everyone feels welcome. I know as a Black [person] and [as] Black women, we always feel left out. I’ve always felt like that my whole life.”

Similarly, Karena Blue, a junior graphic design major, joined the organization to have a space to turn to that is designated for Black women, and to have “something like a safe haven” to connect with members that may have similar interests and receive advice.

“I know it can be hard relating to other people who do not necessarily understand what you are going through,” Blue said.

Before transferring to Columbia, Blue was part of a similar organization called Sisters when she attended the University of Illinois at Chicago. She said the organization hosted events that ranged from teaching Black women how to take care of their hair to education on breast cancer.

“I remember when I was just starting out, I didn’t really have anyone to talk about it with,” Blue said. “When you have a dialogue with people who look like you, it is more productive.”