Impeachment and Brexit, explained by Ireland and Chicago residents 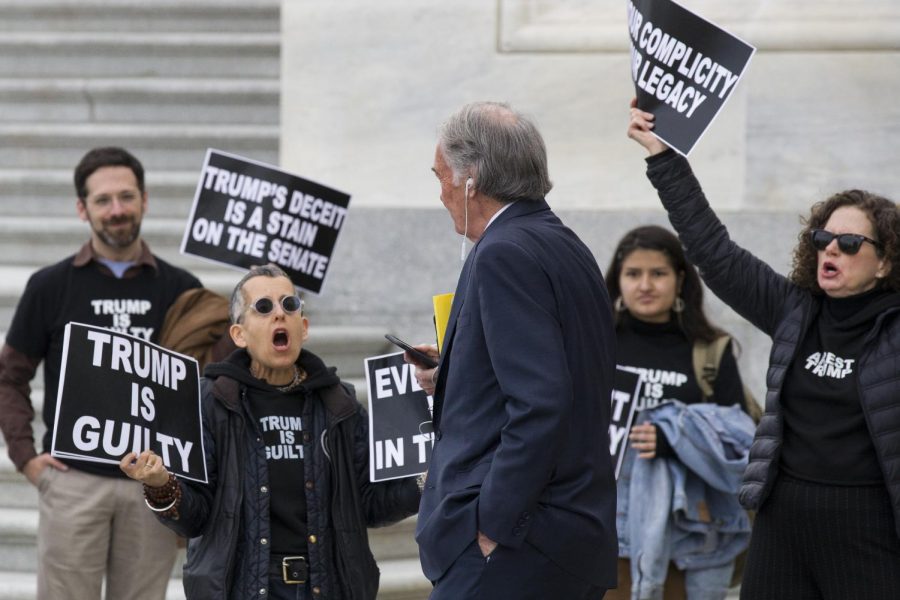 (Center) Sen. Ed Markey (D-Mass.) passes by protestors outside the U.S. Capitol in the midst of President Donald Trump's impeachment trial in the U.S. Senate.

Brexit and President Donald Trump’s impeachment trial are the largest political events happening in Ireland and America, respectively, that could make history and have serious implications for the world-at-large.

Brexit, which refers to the process of the United Kingdom—including Wales, Scotland, England and Northern Ireland—exiting the European Union, began in 2016 when 52% of the British population voted for a “British exit,” or more widely called “Brexit,” to allow the U.K. to create its own trade agreements, immigration policies and independent identity.

The conservative-heralded Brexit has dominated conversations among people in Ireland for the past four years, as the U.K.’s separation could be a detriment to trade and travel across the tension-filled border between Northern Ireland and the Republic of Ireland, which would remain within the EU.

As for Trump’s impeachment, it came to the forefront in September 2019 when an anonymous whistleblower revealed that Trump allegedly asked Ukrainian President Vladimir Zelensky to produce incriminating evidence against former Vice President Joe Biden and his son, Hunter, in exchange for military aid.

Following hearings and the creation of the articles of impeachment in the U.S. House of Representatives, Trump’s impeachment trial in the Senate will determine whether or not he will be officially removed from office, thus leaving Vice President Mike Pence to fill his role for the time being. Senate Majority Leader Mitch McConnell (R-Ky.) has made it clear he intends for the trial to be wrapped up quickly, and after Democrats failed in their efforts to have witnesses testify in the Senate, the trial is expected to conclude in Trump’s exoneration on Wednesday.

While Brexit and the impeachment are two separate issues on opposite sides of the world and affecting entirely different populations, both have something in common—they are contentiously debated across conservative and liberal party lines but likely only marginally understood by the public.

A 2019 article published by Public Radio International listed several reasons Americans should care about Brexit, including the national security, travel restrictions, the impact on immigration, and our relationship with allies. Meanwhile, other articles and news reports have explored the impact the Trump impeachment hearings may have on international politics.

The Chronicle spoke with people from both the U.S. and Ireland to find out what average people understand of the two history-making developments.


IMPEACHMENT INQUIRY: explained by Irish people
Dublin, Ireland, resident Ciaora Delaney is not interested in politics or the impeachment of Trump in America, but she is staying up to par with the headlines on news platforms and social media.

Delaney, a recent graduate of the Technological University Dublin, said her understanding of the impeachment is that Democrats feel it is “rightful to impeach Trump and he now has to go through another government body that Republicans have control over to pass whether he is going to be impeached or not.”

Cunningham polled more than 1,000 Irish people for The Journal, an independent online publication in Ireland, on what they believed the biggest moment in 2016 was––22.5% of respondents wrote it was the election of Trump and only 7% chose Ireland’s election.

Ray Corish of Wexford, Ireland, is up-to-date with the impeachment inquiry and said he trusts it will turn out OK because of America’s “very good constitution.”

“Because of the system of checks and balances, I wouldn’t be too worried,” Corish said.


BREXIT: explained by Americans
Tom Mikula, a Harold Washington Library employee, said he reads a variety of news outlets daily and considers himself knowledgeable about international affairs compared to most people in Chicago.

“I’ve heard that Brexit is the plan of the British to break away from the European Union and go on their own,” Mikula said.

Ethan Glover, junior film major, moved to the U.S. from Colby, England, in 2017 and is an outlier among most Chicago residents for his deep understanding behind Brexit and the possible outcomes.

Glover said, although it is a challenge to keep up with Brexit while in America, he stays informed by watching BBC and having conversations with colleagues.

“It’s tricky because there’s always a lot of information, and I don’t think that a lot of Americans that I speak to are actively trying to seek information on Brexit,” Glover said.

“There are just so many things competing for people’s attention,” Tillman said. “People have their families, their jobs and everything in their lives to worry about—local news, national news and everything else.”

Daniela Barrios Morello, a master’s of social work graduate student at Loyola University, said while she almost exclusively follows international news from Venezuela, where she is from, she understands the basics of British politics and Brexit.

“Not everyone in the [UK] is happy with the decision,” Barrios Morello said. “So they have been back and forth about that referendum.”