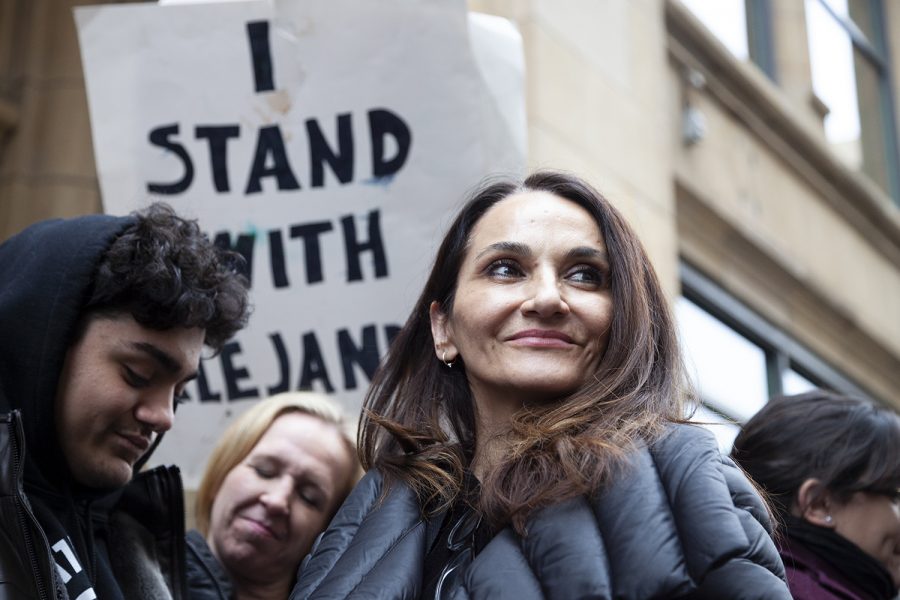 Brought to the United States as an infant, Chicagoan Alejandra Cano has spent the past few months fighting for her right to live in the U.S.

U.S. border agents stopped Cano, a permanent resident, at the airport after she returned from a recent trip to Chile where she was visiting family—likely due to previous convictions of retail theft, her attorney Kate Ramos said in a Thursday, Nov. 14 press briefing. This resulted in Cano’s first check-in with immigration officials, starting her journey through the immigration courts seeking to cancel removal proceedings.

A crowd assembled by The Resurrection Project, an organization that works to build healthy communities, and several other organizations stood outside in the bitter cold in support of Cano.

More than four hours later, Cano emerged from the doors with a fist raised in the air.

Immigration officials will require Cano to return to the 536 S. Clark Federal Building on Tuesday, Nov. 19 for a second check-in after deciding more documents needed to be reviewed before a decision could be made on whether or not to detain her.

“My mom has made plenty of mistakes,” said Cano’s 14-year-old son Nicolas, who is a U.S. citizen. “She has a very great story in recovery, and just for her to be punished again is not fair because she has been punished once, and she has learned from her mistakes.”

Cano began working as a spokesperson for multiple addiction recovery groups after experiencing addiction herself.

In addition to one of her sons, the crowd featured appearances from City Clerk Anna M. Valencia, Cano’s mother Aurora Posada and two close friends of Cano whom she met while in recovery.

“This is a victory,” Cano said after her check-in. “Our main goal was for me not to get detained, and I am out here free with you guys.”