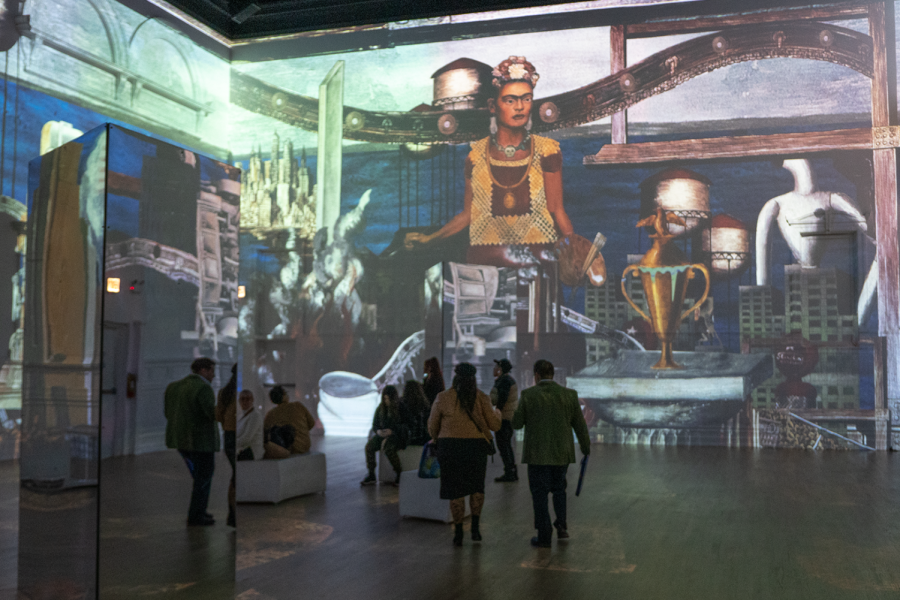 Attendees stop to look at one of Kahlo's many self-portraits.

As the tall, white curtains of the Immersive Frida Kahlo exhibit open, visitors hear the sounds of classically-composed music which draws them into a walk-through digital experience of paintings and self-portraits by Frida Kahlo.

“The show is very intense, but in a way that isn’t overwhelming,” said Jack Braithwaite, a junior photography major and shift lead, who supervises daily operations at the LightHouse ArtSpace Chicago. “I think the most impactful thing is just seeing how she represented herself within her painting.”

Produced by the creative team behind the Immersive Van Gogh show, the exhibit at 108 W. Germania Place will run through May 28. Immersive Frida Kahlo includes 500,000 cubic feet of artwork and 1.2 million frames of video that display Kahlo’s life as it unfolded during the 20th century, while she fought for gender equality and empowerment as a female artist.

“She was so ahead of her time, and yet so relevant to today’s world,” said Vicente Fusco, associate producer of Immersive Frida Kahlo. “We always thought that her life as a whole could lay the foundation of such a rich canvas to an immersive show.”

The exhibit places viewers in the center of the self-portraits Kahlo created, including an oil painting, “The Wounded Deer,” in which the artist painted her head onto the body of a deer that had been hit by several arrows.

“She was such an advocate for women’s rights and women within the art community, because she was so discriminated against that she took it upon herself to display her art in a way that would help women further their art, too,” Braithwaite said.

Along with the display of self-portraits, the exhibit includes Kahlo’s expression of the Mexican Revolution, in which she lied about her birth year being in 1910 when the revolution began. Kahlo made her birthday appear to coincide with the conflict in Mexico that lasted from 1910 to 1920 so it would be associated with the historical revolution, according to the Immersive Frida Kahlo website.

“We couldn’t have chosen a better character to depict great values like equality, empowerment, respect, willpower, but also resilience,” said Fusco, who also produced The Art of Banksy exhibit shown in six cities across North America.

The exhibit, currently shown in seven cities across North America, includes a ballroom, balcony and two side rooms allowing viewers to experience the 45-minute looped display in a museum-like fashion.

“I would invite the viewers to enjoy this new way of experiencing art,” Fusco said. “At the end of the day, it’s a relatively new concept, and ultimately art is art; and the beauty of it lies within every individual’s interpretation.”