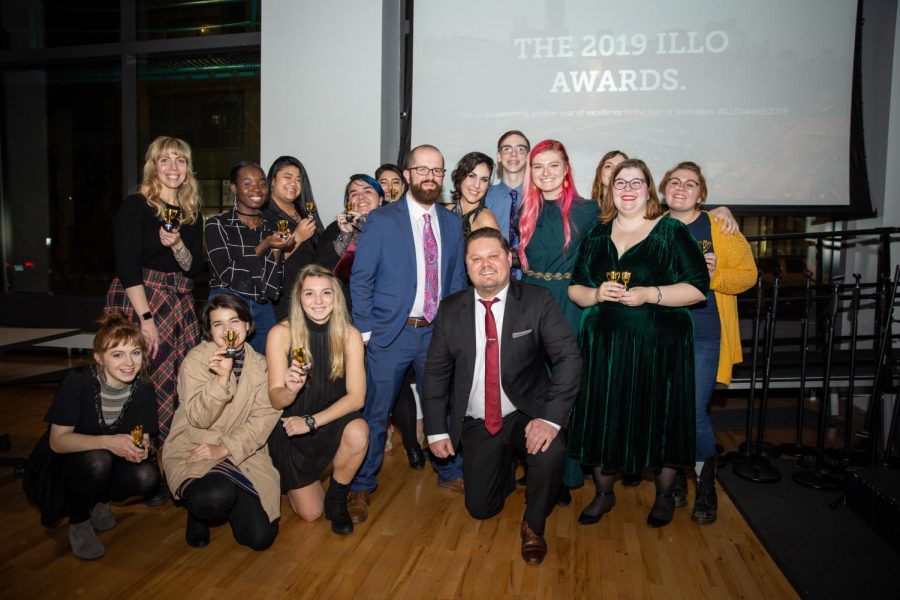 ILLO is hosted by Chris Arnold and Chris Eliopoulos, assistant professors in the Illustration Department. At the awards there are 19 categories, which range from best traditional Illustrator to best website to best overall Illustration.

When Ali Cantarella was five years old, she stumbled upon her brother’s “Dragon Ball Z” fan art and discovered what would eventually become her lifelong passion—illustration.

“[After that,] I just kept drawing,” Cantarella said. “I would do anime fan art, fashion illustration … I got really into making up my own characters and stories in high school.”

Cantarella, a 2013 illustration alumna, blossomed as an artist during her senior year when she was the recipient of the Albert P. Weisman scholarship award for her self-published graphic novel, “The Hasty Pastry,” which she said “springboarded” her career.

Her illustration career came full circle Thursday, Dec. 5 when she was named “Alumni of the Year” at the college’s fifth annual ILLO Awards, which showcases the best illustrative work from current students, alumni, faculty and community partners.

ILLO is hosted by Chris Arnold and Chris Eliopoulos, assistant professors in the Illustration Department. At the awards there are 19 categories, which range from best traditional Illustrator to best website to best overall illustration.

“It’s reassuring and encouraging because it makes me feel excited to continue my time here,” Hink said. “Just from my short time being [at Columbia] and already getting recognized by the teachers is really flattering.”

Arnold said there is no formal process for students, alumni and faculty to submit their art. A jury panel of full-time faculty members and Mel V. Vargas, president of Columbia’s Illustration Student Group, contact faculty members teaching specific courses for a list of nominee recommendations. They then evaluate the submitted work.

In 2015, Arnold was teaching a portfolio class and realized a number of his students were not getting the recognition they deserved for their work—so he created the awards.

“I immediately noticed we didn’t have a lot of students with awards [or] honors, and the students we had with those specific things often had to leave the college to find them,” Arnold said.

The criteria for deciding a winner depends on the category itself, Arnold said. In some cases, it is based on the artwork specifically, but other categories are based on participation and relationship building.

After such growth, Arnold said the awards are in a stable place and he wants to continue to build upon the success of the competition.

“Where it goes is greater interaction with the community that already exists,” Arnold said. “Things like having alumni participation, maybe having other faculty and recognition of more students. That’s the magic of this, and I’d hope that we’re able to bring more of that to this in the future.”