‘I just want to get a job’: Students struggle to find work, on and off campus 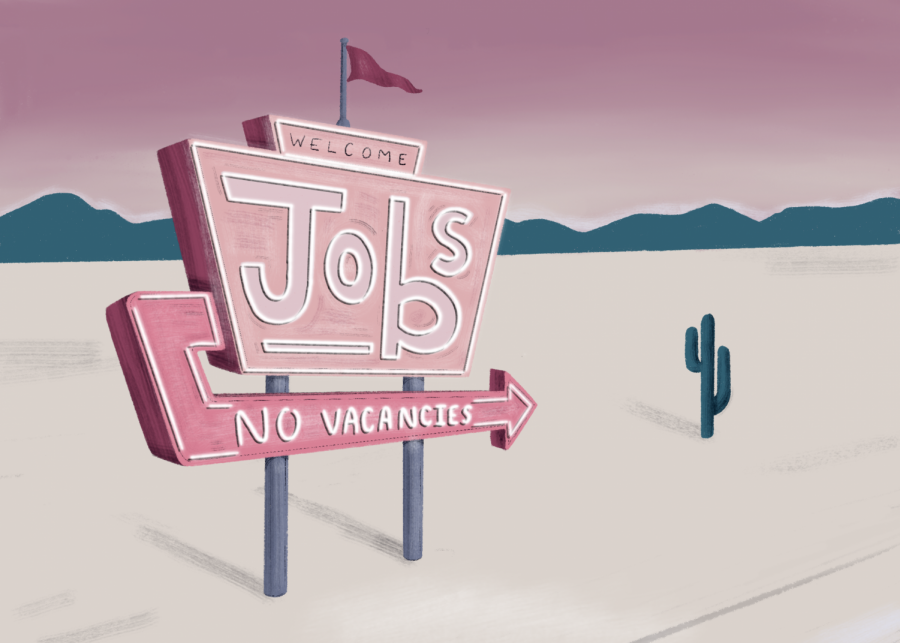 When she transferred to Columbia this semester, sophomore animation major Anne Gage hoped she would also be able to transfer from her job at a Des Moines-area Starbucks to one near campus—but the pandemic has temporarily stopped their location transfers, she said.

So, she started applying for on-campus jobs, including positions as a curatorial assistant at the Museum of Contemporary Photography, 600 S. Michigan Ave., a production tech at the Student Center, 754 S. Wabash Ave., and a Theatre Department work aid.

Gage said she has applied to at least six on-campus jobs since late August. She has only had one interview and was later told all the positions had already been filled.

“[I have applied to] anything I can do that I can learn easily, like IT or anything animation related, but I’ve had no luck,” Gage said.

Gage’s experience is not unique. Some students are facing a similar struggle in their job search, both on and off campus.

There may be fewer positions available on campus because of the lower volume of students in campus buildings, said Eric Wordlow, the assistant director of Student Employment.

Between July and mid-September, Wordlow said more than 130 students were hired for on-campus positions.

He said the peak time for campus hires is typically between August and the end of October, so students should still be on the lookout for open positions.

But “open positions” do not translate to a job for everyone. Some, like freshman film and television major Patrick Mallon, sent in several applications through Handshake—the online platform that hosts on- and off-campus job and internship listings—since early August, but have never heard anything back.

His applications still say they are “pending,” he said.

“Handshake has not been the best [with] getting stuff back to me,” Mallon said. “They have my recommendations … and cover letter, but I have not heard anything back.”

While he wants the disposable income an on-campus position would provide, Mallon said his classes are keeping him busy while he waits for communication from a potential supervisor.

Wordlow said this is likely because supervisors have not updated the positions on Handshake. Applications that are pending on the app have not yet been reviewed by anyone, Wordlow said. An application may remain pending for months if the hiring manager has already found a candidate but leaves the listing up for a predetermined duration.

Some positions will get hundreds of applications, Wordlow said, so hiring managers may not get through all of them before selecting a candidate.

He said there will be more communication in the future encouraging supervisors to use the notification system to “review” or “decline” pending applications.

However, he said students should know that any time they apply for a job, in or out of college, they may not hear back.

It is okay to reach out to the hiring manager to let them know you are awaiting communication, he said. To increase the chances of getting hired, Wordlow said it is best to apply to many jobs at once.

In order to stand out from other candidates, Wordlow recommends students keep their resume up-to-date with relevant skills and experiences. Even if a student has not had a job before, they can list skills they have learned in courses. He said it is helpful to tailor a cover letter to the position a student is applying for and create a complete profile on Handshake.

Instead of trying to secure an on-campus position, other students have gone off campus to find work, only to find themselves in a similar predicament.

To make ends meet, freshman music technology major Isabella Sarmiento has been offering tarot readings for $5 each. While the readings are fun, they can also be draining, and Sarmiento said she would prefer a regular gig.

Unfortunately, her applications have not garnered any response from off-campus employers.

“I have not gotten a single reply back, not even to reject me,” she said. “It’s hard, especially during [COVID-19].”

The scarcity of off-campus positions may be explained by city and nationwide unemployment. According to the U.S. Bureau of Labor Statistics, the total number of jobs in the Chicago metro area is down 7.6% compared to one year ago, as of August 2020.

That is 366,600 fewer jobs than last August, with the largest percentage of jobs lost in the leisure and hospitality sector.

Sarmiento said her experience is in entertainment and retail, so she has applied to museums and stores to no avail. She has also applied to a number of on-campus jobs through Handshake, like tutoring positions, and has not received any response there, either.

The constant search is disappointing to Sarmiento, who said she likes to work and is eager to find a job in a fast-paced environment. She said she also wants to save money to be able to move out and support herself.

“I just want something to do,” Sarmiento said. “I kinda want to grow up already. I’m just ready.”