‘I don’t feel like I have a home anymore’: Students scramble after dorms closed 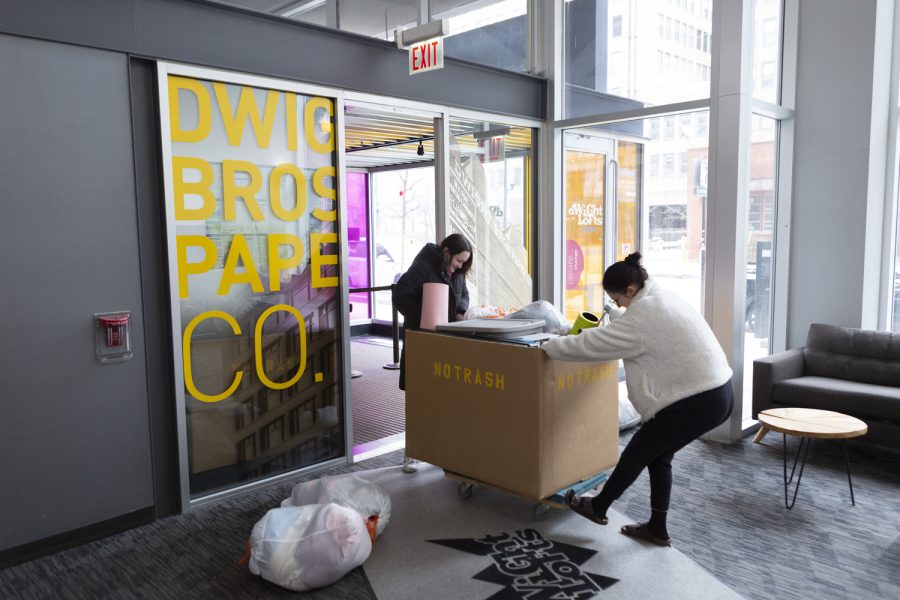 Two Dwight residents use a bin to move their belongings out of the dorm building, which will close due to the coronavirus pandemic.

Reardon, a freshman game development major, is from California, which was put on lockdown Thursday by Gov. Gavin Newsom. The Golden State governor ordered all residents to stay in their homes aside from essential travel, such as to grocery stores or for medical purposes. The move came as the number of coronavirus, or COVID-19, cases in the U.S. surpassed 14,000.

But Reardon has another reason for not returning to California—both of his parents are in the “high risk” category for people who are most likely to contract the coronavirus, especially his mother, who is immunocompromised.

“If my mom gets sick, there’s a chance she might die,” Reardon said.

In a Friday, March 13 interview with President and CEO Kwang-Wu Kim, the Chronicle asked about how the coronavirus would affect on-campus living.

“One very prominent university in the United States said to its students, ‘Leave the dorms.’ They used the language ‘You are not welcome to return.’ I don’t want to be that school,” Kim said.

But five days later as the pandemic quickly escalated, Columbia announced Wednesday, March 18 in a collegewide email that all campus housing would close Sunday, March 22 at 5 p.m. until further notice.

Kim encouraged students in dorms to make travel arrangements, but if they are unable to move out by March 22, he advised contacting Director of Residence Education Kelli Collins to make alternative arrangements.

In a Friday, March 20 email to students, faculty, staff and parents, the college announced it would be giving account credits to students with housing contracts.

“In light of these exceptional circumstances, and in recognition of the hardships the closure of student housing can cause, Columbia College Chicago will be providing an account credit to students who have a housing contract with Residence Life for the Spring 2020 term,” the email read.

The account credit will also apply for unused portions of meal plans. It will take a minimum of three weeks for credits to transfer.

Students with a resulting credit balance will receive a refund and are being encouraged to set up a direct deposit in the CCCPay section of the MyColumbia portal.

“Students and parents should not return to campus to collect their items and move out while the ‘Stay-at-Home’ order is in effect,” the email read. “We understand this will be a source of anxiety for many of you who are eager to return for your property, please know your things will be not be touched or moved.”

Campus administrators from the college were not available for further comment as of press time, despite repeated attempts by the Chronicle.

The closure occurs as other higher education institutions across the country are also closing residence halls, leaving many students without anywhere to go. In Chicago, students at Loyola University were also told to vacate dorms by Thursday, March 19, as reported March 16 by the Loyola Phoenix.

Students at schools across the country are pushing back against their administrations in the wake of sudden changes. At DePaul University, several petitions are circulating, requesting a variety of accommodations ranging from reduced tuition for the next academic year to passing grades for everyone given the current distractions, as reported March 16 by The Chicago Tribune.

“It’s very irresponsible to basically kick these students out on the streets, force them on public transit, have a chance they might be infected and then spread that to their homes,” Reardon said.

Although Reardon understands why the college was forced to make this decision, he said it would have been better to give students the option of staying in the buildings because many left before the closures were even announced. In doing so, he said it could actually help slow down the spread of the coronavirus as college students would not have to fan out across the country, possibly carrying the virus with them into their states and homes.

To make matters worse for Reardon, he does not know how he is going to transfer thousands of dollars worth of computer and gaming equipment pivotal to his major to wherever he ends up living. Initially, he drove from California to Illinois to attend Columbia, bringing the equipment with him. He planned on driving back to California, too, but now does not know what to do.

Reardon is one of 2,219 students who are from outside of Chicago and were living in the Dwight, 30 East, University Center or The Arc residence halls in the Fall 2019 semester, according to Institutional Effectiveness.

The collegewide email sent Wednesday left James Jiang wondering if he was going to get a refund for the eight weeks he will not be living in the Dwight dorm building.

According to Columbia’s website, the cost of the standard year-long contract in a residence hall can range from $13,638 to $16,200 depending on the type of room and if the student has a meal plan for the 2019–2020 academic year.

Jiang, a sophomore computer animation major, was shocked to read the email alerting residents they would have to vacate because he found Kim’s language on the subject earlier in the week more optimistic and welcoming.

As an international student from China, Jiang now has to find a friend to stay with because China and surrounding countries in Asia are not allowing flights to come in. One of Jiang’s friends was forced to take a 50-hour flight to China, then stay in a hotel paid for on her own for 14 days to self-quarantine.

“That’s just not [an] option for me,” said Jiang, who had just called his parents that morning, March 18, and said they were extremely worried he may not have a place to stay.

As reported by the Chronicle, the college is actively reaching out to international students to assist them with housing or relocation. For any students unable to relocate, the college said it will provide assistance.

Jiang confirmed he did receive an email from Clare Lake, director of International Student and Scholar Services, offering assistance.

Many students, like Reardon, are worried about unknowingly bringing the coronavirus home with them and putting their family at risk.

Victor Soto, a junior music business major, was hoping to stay in his dorm for the rest of the semester rather than go back home to Iowa. Soto even bought enough food to last more than a month without having to leave his room.

“I don’t know what I’m going to do with that because I have to go home in [four] days,” Soto said March 18. “With my unique situation with my family, I figured the best decision would be to stay here rather than to go home and possibly risk infecting my mom.”

Soto’s mother is asthmatic, putting her at a higher risk for the coronavirus. His sister is also immunocompromised and is in self-quarantine after already being exposed to someone who was later diagnosed with the coronavirus.

As a college student, Soto was not planning on returning home and does not have his own bed there. Instead, he’ll have to sleep on the couch in the weeks to come and risk being exposed to his sister if she has the coronavirus.

“I get that Columbia is trying to make a decision to keep us safe, but if anything this just worsened my life,” Soto said. “If anything, it has put a lot of students at risk.”

“The biggest surprise was how fast and unexpected it was because the previous emails suggested they weren’t going to shut down,” Moss said. “But they did with less than a week’s notice.”

Moss said with so many students trying to move out of the buildings within a few days, it is not the most sanitary process as people pack into the elevators.

“It’s kind of a bummer because when I or other students paid for our residency and paid for a meal plan, we were expecting to have these two months and now we don’t,” he said. “We get the short end of the stick as the students who are paying for all of this.”

This whole ordeal is causing Reardon to rethink his plans to return to Columbia in the fall.

“I’m so appalled by how sudden all of this is that I don’t feel comfortable even coming back here next year,” Reardon said. “Right now, I don’t feel like I have a home anymore. That’s a very, very scary thought, especially with everything that is going on.”