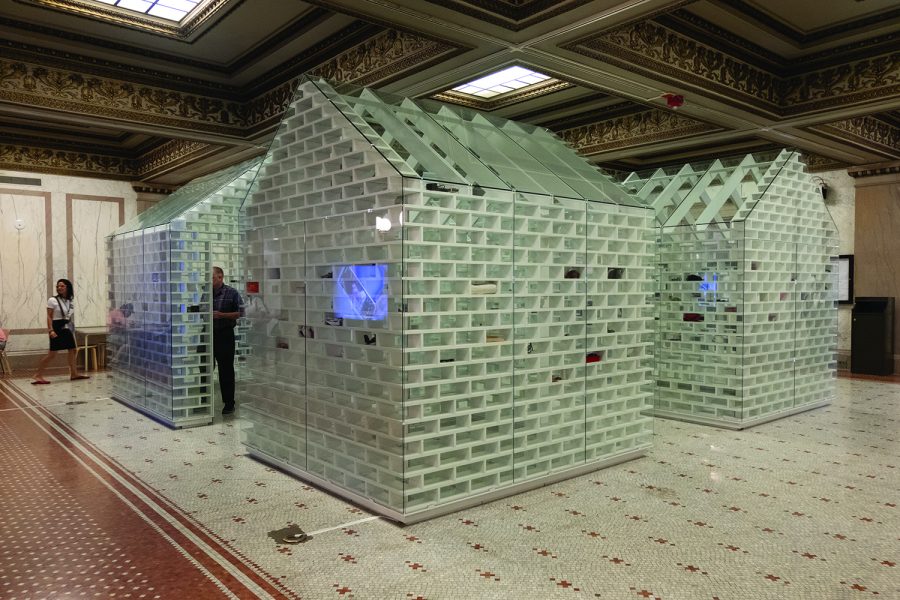 The music backdrop lasts "14 minutes and 20 seconds, which is the average frequency of a death by gun violence" in the United States.

Blair DeLane Holt was a 16-year- old student at Percy L. Julian High School riding a CTA bus home on May 10, 2007, when a gunman fired shots into the bus, fatally striking the teen in the abdomen and wounding four others. Blair was the only one to die as he shielded one of his classmates .

His school ID, a CD he made and his last school photo are among the memorabilia that make up the Gun  Violence Memorial Project, part of the 2019 Chicago Architecture Biennial’s “…and other such stories” exhibition.

“When I got the call, I drove to the hospital crying all the way and running lights to get to my son. But my only child died at 16 and I will never be the same,” Annette Nance-Holt wrote as part of the exhibit.

Created by the MASS Design Group, a nonprofit architecture and design collective behind The National Memorial for Peace and Justice in Alabama, the exhibition debuted at the Chicago Cultural Center, 78 E. Washington St., on Sept. 19 and will remain until Jan. 5, 2020.

The installation features four glass houses made of 700 brick-like shelves, containing various memorabilia from victims of  gun violence, such as the 2019 high school graduation tassel of Mendell Butler-Lebel, who was killed in July 2018, the day after his 17th birthday, when shots were fired into the parking lot of a community center in Florida. Each shelf represents one of the 700 people who die in gun-related deaths every week in America.

“We create space for the public to visualize the dignity of those that were lost, to see themselves in it and to hopefully motivate for the end of the epidemic in any way that is possible,” said Michael Murphy, founding principal and executive director of MASS Design Group.

Nance-Holt and Pamela Bosley co-founded Purpose Over Pain, a Chicago gun restrictions advocacy group made up of parents who lost their children to gun violence.

“[Their stories] moved us,” Murphy said in reference to Bosley and Nance-Holt. “It moved me in a profound way to think about what we are memorializing today.”

The memorial of Terrell Marquis’ Bosley—the son of Bosley—who was fatally shot in the parking lot of his Far South Side church in 2006 while attending choir practice, is a diorama that his mother created that symbolized his life. The model includes a Christmas tree, his driver’s license, his first car and a church.

Songha & Company, a New York-based artist studio was just one of the many organizations that contributed to the overall installation and exhibition.

“We see this installation as a call to action and reflection,” said Hank Willis Thomas, conceptual artist and chief artistic officer of Songha & Company in a Sept. 12 press release. “Our hope is to create a space for public healing, atonement and acknowledgment that we as a society can and will do more to honor the lives of those lost to this epidemic and change the future.”

Thomas, an artist who uses popular culture and advertising in his pieces, named the company after his cousin, Songha Thomas Willis, who was a victim of gun violence on Feb. 2, 2000.

In order to collect objects for the installation, Saint Sabina Church and New Evangelical Bible Church each held two object collections in August. Once objects were collected, they were assessed by the curators to see if they would fit within the installation’s size guidelines.

Although the Memorial Project can hold up to 1,000 objects, only 200 have been donated for installation so far in Chicago.

Along with striking visuals to remind viewers that every item once had an owner, an audio element was added with the help of StoryCorps, a nonprofit organization that specializes in sharing the stories of individuals.

“What we were able to do for this initial project is use StoryCorps’s archive and actually find other stories that had already been recorded from victims’ families talking about their experiences,” said Caitlin Moses Bowser, director and strategic engagement and custom services partner at StoryCorps.

StoryCorps has a booth located near the Memorial Project in the Chicago Cultural Center that will allow more people to tell and record their own stories, Bowser said.

According to Murphy, there will be more opportunities to contribute items from October through December, but the goal is for the Memorial Project to be moved to Washington, D.C. to create a permanent memorial that honors the lives of those taken by gun violence.

“This is the beginning of the project,” Murphy said. “We encourage the public to contribute and go to our website to contribute an object if their loved one was affected by gun violence.”