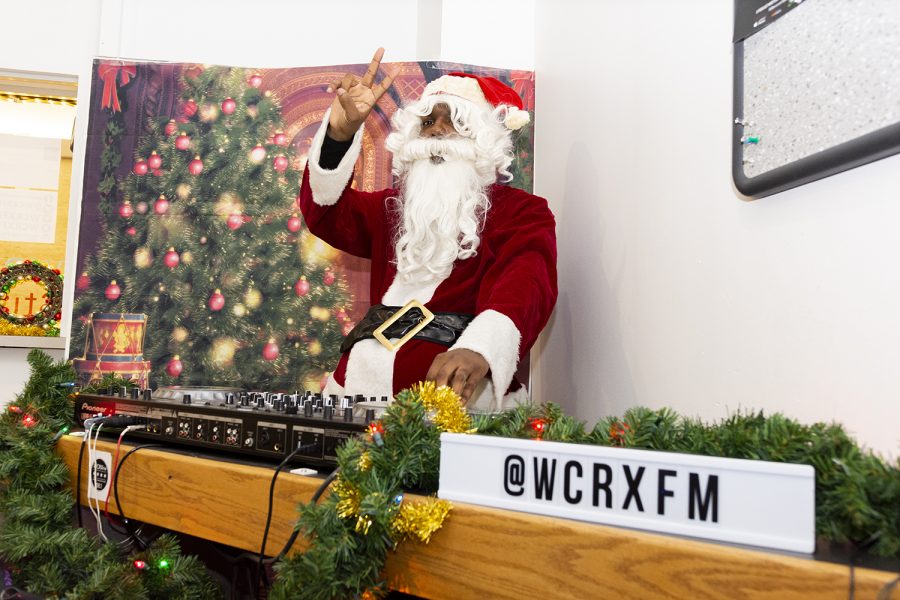 Camron Miller dresses up as Santa Claus in preparation for the 17th annual Holly Jolly Food Drive at WCRX.

For nearly two decades, Columbia’s WCRX radio station has taken on the task of replacing the stress of the last weeks of the semester with sounds of holiday music, the booming voices of broadcast celebrities and that warm feeling one gets from giving.  It sponsors an event that has been known to transform the gloomiest grinch into the happiest holiday elf.

WCRX, 88.1 FM, will host its 17th annual Holly Jolly Food Drive Tuesday, Dec. 3, transforming the lobby of the 33 E. Ida B. Wells Drive building into a winter wonderland of giving. Each year, students and other members of the Columbia community are asked to bring non-perishable food items to the event, which will be donated to the Greater Chicago Food Depository, 4100 W. Ann Lurie Place.

“Part of what we want to teach is the civic responsibility of broadcasters,” said Matthew Cunningham, faculty adviser for WCRX and assistant professor of instruction in the Communication Department.

Cunningham said the broadcast is an opportunity for students to engage with celebrities, politicians and musicians, all while being on-air.

Cheryl Morton Langston, former WCRX faculty adviser who first introduced Holly Jolly in 2002, said she kicked-off the food drive to help gain attention for the station but it later became a “fixture” at the college.

“We all had one common goal,” Langston said. “I thought it was a great way for students to learn how to work together and give back as well.”

Growing each year, the food drive went from donations to a yearly tradition that has raised more than $47,000, as well as three tons of non-perishable food items since its beginning.

Aside from donations, people can win prizes through a silent auction or prize wheel, with gifts donated from local businesses and organizations.

Senior music major and Public Affairs Coordinator at WCRX Ryan Pollock said the lobby of the 33 E. Ida B. Wells Drive building is the ideal location.

“It’s literally right in front of everybody’s faces,” he said.

CaSera Heining, 2017 radio alumna and producer at WGN Radio, remembers dressing up as Santa Claus when she was at the college and the amount of holiday spirit surrounding the event.

“As you get older, you get so stressed out and get so busy with the runaround of the holidays, you forget what the actual meaning of it is,” Heining said. “I feel like Holly Jolly gives you that chance to be reminded what the true meaning of Christmas is.”

Other former students, such as Iridian Fierro, 2018 radio alumna and producer at La Ley 107.9—otherwise known as WLEY-FM—remembered how nerve-wracking interviewing guests for the show was, but said Holly Jolly is a time when students “put [their] best foot forward to give back to the community.”

For others like Curtis Koch, 2017 radio alumnus and producer at WGN Radio, the broadcast comes at an ideal time, kicking-off the holidays before the end of the fall semester.

“It’s just a really fun event,” Koch said. “Students can walk by and get a glimpse of what it’s all about and see the station in action.”