The Columbia Chronicle • May 22, 2019 • https://columbiachronicle.com/global-education-department-dissolved-staff-laid-off 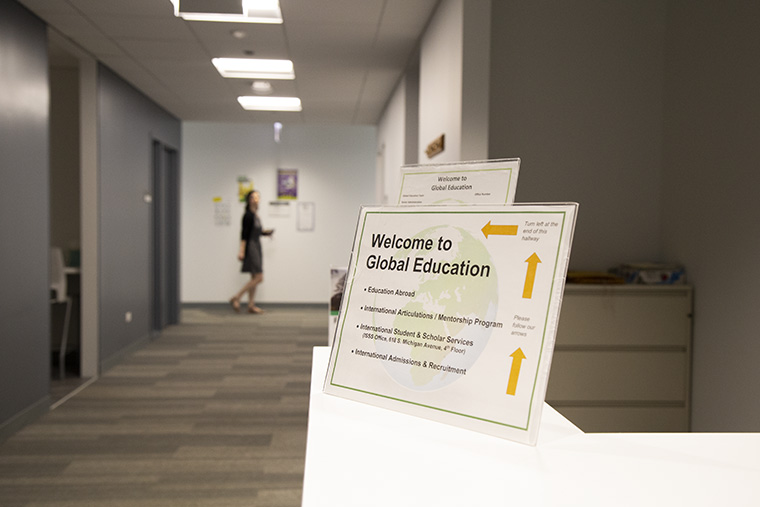 The Global Education Office was “dissolved” this morning, leaving staff concerned about the future for international students on campus.

Staff members were made aware of changes to the department at 9:45 Wednesday morning, according to International Student and Scholar Coordinator Kevin Obomanu.

“Several positions are being eliminated,” Obomanu said. “The office is being dissolved.”

News Office Senior Director Lambrini Lukidis stressed the office was not dissolved, but reorganized, in a Wednesday email.

“Growing international-student enrollment and solidifying study-abroad options are critical parts of our plans moving forward,” she said via email. “We are forecasting strong growth in the number of international students, and today’s changes are designed to best support that goal.”

“My colleagues are defeated, upset,” Obomanu said. “Some feel humiliated and undervalued. I really focused a lot of my energy and my work at the welfare of international students, and there’s not going to be that kind of support for this group of students that we have.”

Obomanu said the office received a calendar invite from the secretary of Interim Senior Vice President and Provost Suzanne Blum Malley to meet Wednesday morning. They were unaware of the reason for the meeting.

“If international students feel as if they need … to voice any frustration,” Obomanu said, “they should share their grievances with the interim provost, as well as the incoming provost.”

Hours later President and CEO Kwang-Wu Kim sent an email to faculty and staff outlining a number of changes, in addition to Global Education.

“I approved difficult but necessary decisions to eliminate staff positions in several departments based on the recommendations of the senior team,” Kim said in the email.

Other impacted areas include the Library; Strategic Communications and External Relations; Business Affairs; and Facilities and Engineering.

The meeting informing Global Education staff of changes in the office took place just hours after United Staff of Columbia College members were escorted outside the 600 S. Michigan Ave. Building after attempting to meet and discuss staff layoffs with Kim.

“Four of us leave at the end of the week, two are here until June 7,” Assistant Dean of Global Education Pattie Mackenzie said in an email sent to The Chronicle. “Recruitment is going back under Enrollment Management; ISSS [International Student and Scholarship Services], if the remaining director stays, will be part of Student Affairs, not Academic Affairs; and the Assistant Provost may stay to manage affairs although that is to be determined since he is out of the country today.”

“We do not take such steps lightly,” Kim said in the email, “but do so with the confidence that this will support our goals of returning to enrollment growth, better supporting our current students through a strengthened faculty and an expanded student affairs presence, and further advancing the college’s mission.”

Obomanu said he is disappointed the office is being changed and added Kim has been distant toward the Global Education Office recently despite seeming eager to help international students when he started at Columbia in summer 2013.

The Chronicle has requested interviews with Blum Malley and Joseph.