The Columbia Chronicle • May 8, 2019 • https://columbiachronicle.com/film-students-work-with-emmy-award-winning-cinematographer 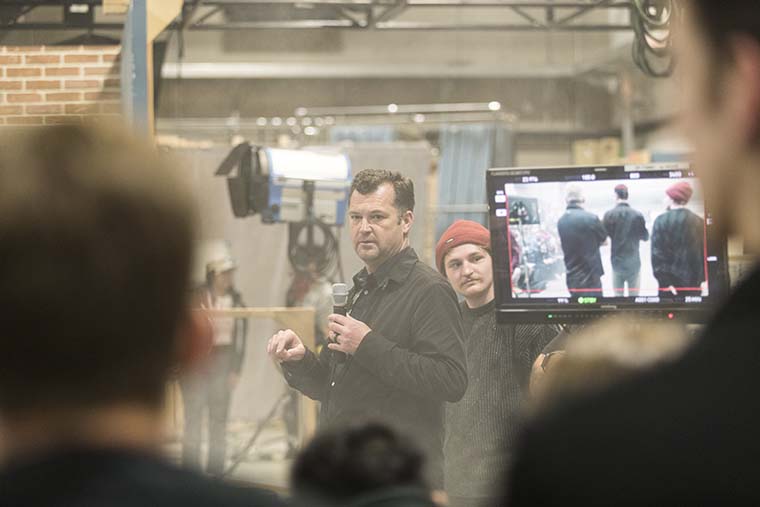 Video recording has never been easier or as accessible as it is today. Colin Watkinson, 2017 Emmy-award winner and 2018 nominee for his cinematography work in “The Handmaid’s Tale,” advises people to just keep shooting.

“Everyone has a camera [and] can tell a story if that’s what [they] want to do, so there’s no excuse,” Watkinson said.

Students filled the seats of room 402 at 1104 S. Wabash Ave. May 1, with late arrivals sitting on the floor and standing against the walls, all to hear about Watkinson and gaffer Rick Thomas’ work on the set of “The Handmaid’s Tale.”

Following the conversation with Watkinson and Thomas, students had the chance to attend a lighting class taught by the two. Using the Media Production Center, 1600 S. State St., Watkinson and Thomas set up a scene from “The Handmaid’s Tale” and students participated in the process of lighting the scene.

Watkinson said it was slightly intimidating speaking with students because he did not go to film school. He added that it is important to share his knowledge with fellow filmmakers.

“I’m really impressed that people study it to this level [at Columbia],” Watkinson said. “It shows when [we] work with directors that have worked hard at film school. [I] can see it in their work.”

Junior cinema art and science major Sean Delahunt attended the event because Watkinson was the director of photography for his favorite movie “The Fall.” A clip from “The Fall” was shown during the lecture to demonstrate how Watkinson’s color palette and mood in the film differed from the work he did on “The Handmaid’s Tale.”

In the future, Delahunt said he wants to do similar work for feature films and possibly TV shows like Watkinson.

Scholl said he has noticed students who attend master classes start applying the techniques they learned into their own films.

“That’s what I really like to see, when they report back to me and say ‘This is what I learned and this is how I’m using it,’” Scholl said.