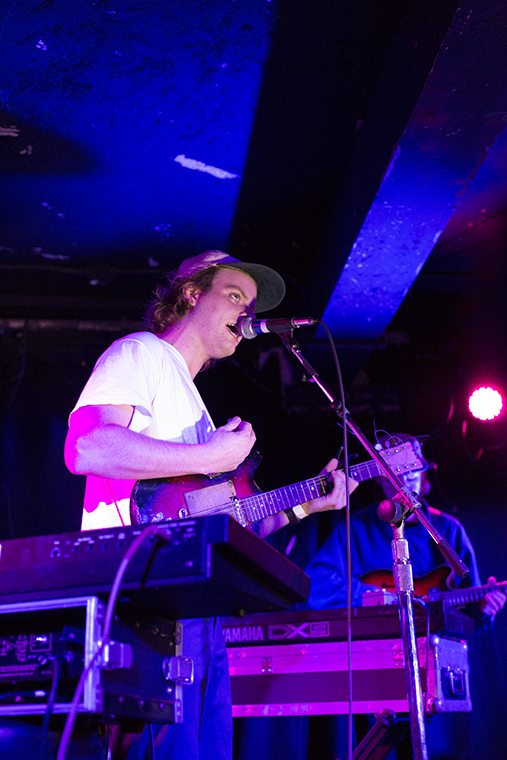 The last time Mac DeMarco played at The Empty Bottle, 1035 N. Western Ave, was in July 2013. At the time, the young Canadian lo-fi indie rocker was just finishing recording his new album Salad Days, released on April 1, 2014 as a follow-up to his lyrically dense and sonically hazy sophomore album 2. DeMarco is bringing his signature sound to a tour that includes shows at the Empty Bottle as well as stops at coveted summer festivals such as Osheaga in Montreal and Øya in Norway.

Since his last Empty Bottle appearance, DeMarco’s evolution from music nerd to indie superstar has been propelled by his often confusing contradictory stage presence, which showcases his tender, romantic music. He often strums with his tongue out, thrusts toward the crowd and slips in and out of a British accent while cracking jokes between songs. DeMarco’s two consecutive sold-out Empty Bottle shows showed not only the unlikely heartthrob he has become, but also how his sun-soaked, guitar-driven pop has captured fans and critics across the world.

Before opener Juan Wauters hit the stage, the venue was almost full and the mood was calm. The first sign of excitement came when one fan exclaimed giddily, “Oh my God, Mac DeMarco brushed against my arm outside.”

Perhaps a few years ago, DeMarco’s dreamy, sultry songs would have been considered niche to a stoner or zealous indie blogger, but at The Empty Bottle, a variation of ages, genders and styles came to show their support. Some seemed to have been there simply to see what all the buzz was about, while others were overheard saying, “After tonight, I can die happy.”

The new album, Salad Days, retains the same pop melodies DeMarco has been known for, but the lyrical content sways toward the more personal, with hooks about being tired, being in love and being lost in life.

DeMarco, wearing his signature white and turquoise baseball hat, a tucked-in plain white T-shirt and blue jeans rolled up to his ankles, jumped on stage to shrieks and hollers from the crowd.

“It feels good to be back at The Bottle. Let’s relax and have a good time,” DeMarco said before tearing into the title track of his new album.

The lyrics, “As I’m getting older, chip up on my shoulder/ Rolling through life, to roll over and die,” demonstrate he is an artist unafraid to play daydreamy music with lyrics implying existential woe. The song progresses like a tired stroll down the block with repetitive chords that echo DeMarco’s ambivalence toward the monotony of daily life.

As soon as the song ended, DeMarco’s improvisational skills took center stage when he had to step aside to fix a busted guitar string. His guitarist then took audience questions ranging from, “Do you smoke PCP?” to “Can you tell the person next to me to stop farting?”

Once these important questions were answered and guitar strings were fixed, DeMarco went right back to crooning through a few more new songs before paying homage to his favorite brand of cigarettes: “Ode To Viceroy.” The live rendition was complete with an extended instrumental bridge that gave listeners the opportunity to hear DeMarco take his breezy guitar-playing to new heights on a recording. On songs such as “Let My Baby Stay,” DeMarco’s falsetto reverberated throughout the venue, using the intimacy of the space maximized distortion and effect loops hidden underneath his summery indie-rock sound.

A few more technical issues halted the music after the fifth song of the set. Despite these hiccups, DeMarco’s endearing personality made mistakes as much a part of the show as the songs themselves. When one of the keyboards started sending out deafening feedback, DeMarco played it off with nonchalance—“f–k these vintage keyboards,” to which guitarist Peter Sagar replied, “Don’t we have money to buy better ones?”

While that may be true, it just is not DeMarco’s style. His slacker persona only adds more character to his music. Luckily, the keyboard mysteriously began to work after DeMarco encouragingly thwarted it.

DeMarco closed the night with “Still Together,” a nostalgic song dedicated to his girlfriend that sounds like the end of a high school prom. As the 50-minute set came to a close, DeMarco told the crowd that he would be around if they wanted to hang out or buy merchandise, and the crowd stampeded to the table.

DeMarco’s fluid personality is part of his appeal. The sincerity of his lyrics keeps him grounded as an artist who takes his music seriously, but probably not much else.