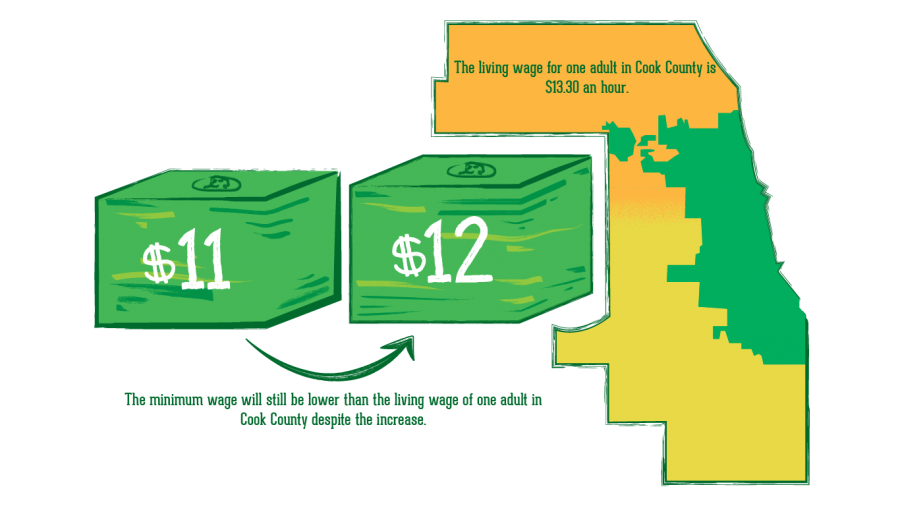 Chicago’s minimum wage increase July 1 could impact employees work hours while providing more income to those who need it.

The minimum wage increased from $11 to $12 an hour following a December 2014 City Council-approved wage increase.

“Some of my friends have been finding it hard to exist with the way minimum wage is right now,” said Sara Walls, 21, an hourly sales associate at Buffalo Exchange, a retail store that purchases and resells used clothing, 1478 N. Milwaukee Ave.

Walls said the increase will help her pay more of her monthly expenses, which include student loans, rent and medical expenses. Without the help of her parents, Walls said she would be unable to afford her expenses at the current wage.

“The stereotype people have is that students are working for a little extra money,” said Susan Lambert, associate professor in the School of Social Service Administration at the University of Chicago. “We know from studies looking at economic hardship among college students that people need the jobs to pay for basic living expenses.”

A January 2017 study by the Institute for Research on Labor and Employment from the University of California, Berkeley, found increasing the minimum wage to $15 an hour in California and Fresno would result in employees receiving $3,900 more a year. This would increase employee purchasing power and stimulating consumer demand, according to the study. However, the increase would also drive up total wage costs and merchandise prices for businesses.

Lambert said the minimum wage increase will benefit those who receive the boost, but wage is only half the earnings equation and the number of hours worked matter, too.

“In hourly jobs, hours tend to fluctuate a lot,” she said. “If you are making 12 or 20 dollars an hour [but] only get five or eight hours a week, you are not going to earn an adequate living.”

“The wage has increased 50 cents over the last couple of years. This is the first year the increase has gone up a dollar,” Triche Dawood said. “That causes some very real concerns.”

The increase in payroll is something businesses have to make up, Triche Dawood said. That may include reducing hours for employees or increasing prices on products, according to Triche Dawood.

“[Businesses] don’t want to cut [hours] because that cuts into consumer experience,” Triche Dawood said. “[But] when it goes up a dollar like this, and another dollar [increase] on the horizon, similar recourse will be taken by the owner.”

Walls said she typically works 35 hours a week but for the past month has worked approximately five hours less in anticipation of the wage increase. Walls may not experience a drastic cut in hours, but some of her fellow employees may work less to account for increased wages.

The minimum wage will increase again July 2019 to $13 an hour, according to the city’s website.

“When we increase the minimum wage it helps this group of young people who are working because they need the income,” Lambert said.