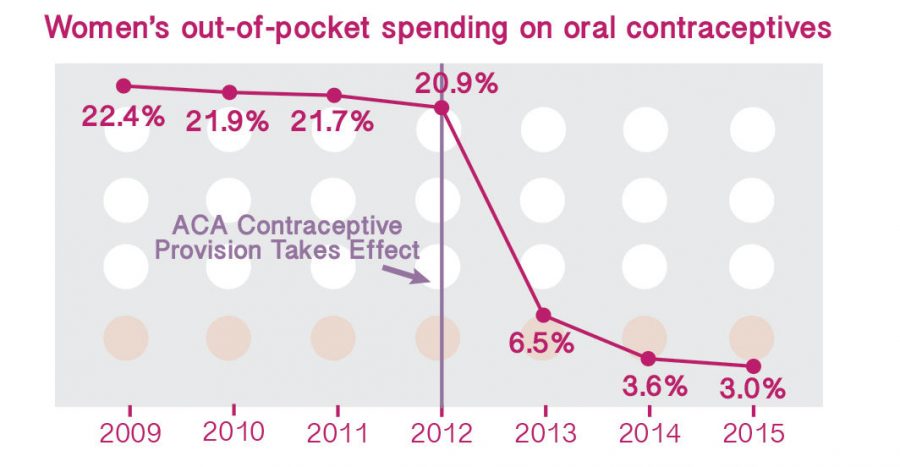 The Department of Health and Human Services issued new guidelines Oct. 6 that broaden employers’ ability to exempt themselves from the Affordable Care Act’s contraceptive coverage requirements. The change has left Illinois women questioning how it will affect them.

The federal rule allows any employer, university or college with objections to contraceptive coverage based on religious beliefs to qualify for an exemption of the requirement to pay for contraceptive health care.

If an employer opts for the exemption, female employees, dependents and students will no longer be entitled to coverage for the full range of FDA-approved contraception with no copay.

However, some Illinois women may not be affected. In July 2016, Gov. Bruce Rauner signed House Bill 5576, which provides access to all 18 forms of FDA-approved birth control at no cost. HB 5576, called the Illinois Contraceptive Coverage Act, went into effect Jan. 1.

Kathy Waligora, director of Health Reform Initiative at EverThrive Illinois, said she worked with Planned Parenthood and the American Civil Liberties Union to write the legislation. While the ACA was supposed to provide coverage for the full range of FDA-approved contraception, Waligora said it allowed insurance companies to limit the amount or type of contraception they provided for women without cost sharing.

“[The ACA] was creating a real barrier for women,” Waligora said. “[Women] were having delays, or they were unable to get their preferred birth control method at all. There was nowhere we could go anymore with our advocacy at the federal level, so we decided we would fix it in the state law.”

“The ACA only provides contraception for women, but we recognized that it takes two to tango and wanted to make sure people could get whatever their preferred method was, even if it was actually a vasectomy for a man,” she added.

The law also gives women access to oral contraception for up to 12 months at a time and get emergency contraception over-the-counter—without a doctor’s prescription or cost sharing— eliminating the customary delay.

While the state law will expand contraception coverage for some Illinois women, it only affects those in individual and small group health insurance plans, Waligora said. Companies with more than 500 employees fund their own insurance plans and do not have to follow many state or federal health care regulations, according to ACA regulation.

Brigid Leahy, director of Public Policy at Planned Parenthood Illinois, said it is difficult to judge how many Illinois women are affected by the federal rule because employers no longer have to report their decision to opt out of the ACA regulation.

“For the women who are affected, the impact can be devastating because women rely on birth control,” Leahy said. “It is basic health care.”

According to the Kaiser Family Foundation, a nonprofit that studies health care issues in the U.S., 99 percent of sexually active women use at least one method of contraception during their life.

Leahy said more than half of women who use birth control pills cite a medical reason, whether it is treating acne or endometriosis.

“[Losing] coverage has a direct and immediate impact on women’s health and ability to go to school or work,” she said. “We are talking about significant costs for women, and [the costs] can be challenging.”

The ACLU filed a lawsuit Oct. 6 against the Trump administration because the regulation change did not follow customary procedure. When a federal regulation is proposed, there is a mandatory 30—60 day period for public comment. The regulation was issued effective Oct. 6 without any public comment. While this sometimes happens with emergency rule making, Waligora said this does not qualify.

Women can take steps to determine whether the change will affect them, Leahy said.

“What we recommend to employees who are concerned about this is that they contact their employer’s HR department or they call the plan and ask if birth control coverage is going to continue and express their concerns that way,” Leahy said. “If women do lose coverage, and they are low-income, there are programs available that can help them get affordable birth control, and Planned Parenthood provides some of those services.”