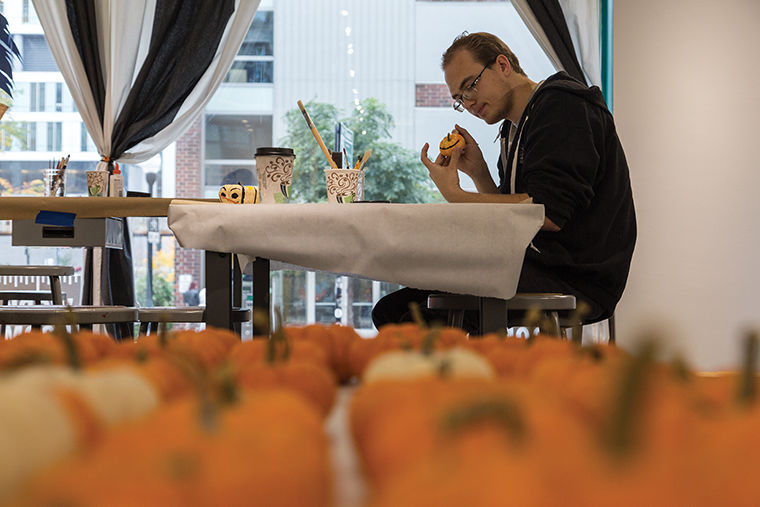 Kelli Herndon, a student’s parent who traveled all the way from New York City to participate in the Oct. 21 Wabash Arts Corridor Crawl celebrations, was excited to experience what she normally does not get to see: Columbia students’ showcased creations.

“I don’t [usually] get this aspect,” Herndon said. “It’s usually just move-in day and then I go back. It’s fun to interact and see what [Columbia students] do here. It’s very cool.”

The event—hosted by the Department of Exhibitions, Performance and Student Spaces and the Office of Student Affairs—featured student art exhibitions, modern interpretive dance performances and music events along Wabash Avenue from Congress Parkway to Roosevelt Road, according to its website. Parents and alumni, who visited visiting for Columbia Weekend—the college’s welcome back celebration that occurred Oct. 22 and Oct. 23—as well as South Loop residents and businesses, were also able to attend and participate.

A fashion show, film screenings, and a pop-up art store were also part of Columbia’s crawl. Local groups’ events included a “Solarbeatz ” mobile sound stage presentation hosted by the Student Programming Board  and a “Radio-Active: We Got the Beat” show organized by the Radio Department and the DJ club .

Aleah Jackson, a freshman journalism major, attended the fashion show “Kaleidoscope: A Fashion Frenzy ” in the 618 S. Michigan Ave. Building, which showcased garments from different countries including Mexico and Asia. She said these events reflect the college’s appeal to various audiences.

“It shows Columbia’s diversity, [and] it shows how Columbia appeals to all kinds of audiences,” Jackson said.

This is the first art crawl in which former Vice President of Student Success and WAC creator Mark Kelly did not participate. Kelly, who created WAC to foster relationships with the surrounding community and showcase the talent of the Columbia community, left the college during the summer to be the city’s Commissioner of the Department of Cultural Affairs and Special Events as reported July 7 by The Chronicle.

Neysa Page-Lieberman— director of DEPS, adjunct professor in the Business & Entrepreneurship Department and WAC curator—said more students wanted to participate in the event than previously because of the local, national and international exposure WAC has recently received.

“The majority of the event planners have been students,” Page-Lieberman said. “We’re seeing such enthusiasm over the events taking place, and the ways students want to represent ourselves.”

Page-Lieberman filled the role Kelly left behind and said she does not think the event’s dynamic has changed because of his departure. The crawl still has all of its key players and partners who organized the event when Kelly was present at the college , she added.

“It gets bigger and more dynamic every year, and that hasn’t changed at all with Kelly leaving,” Page-Lieberman said.