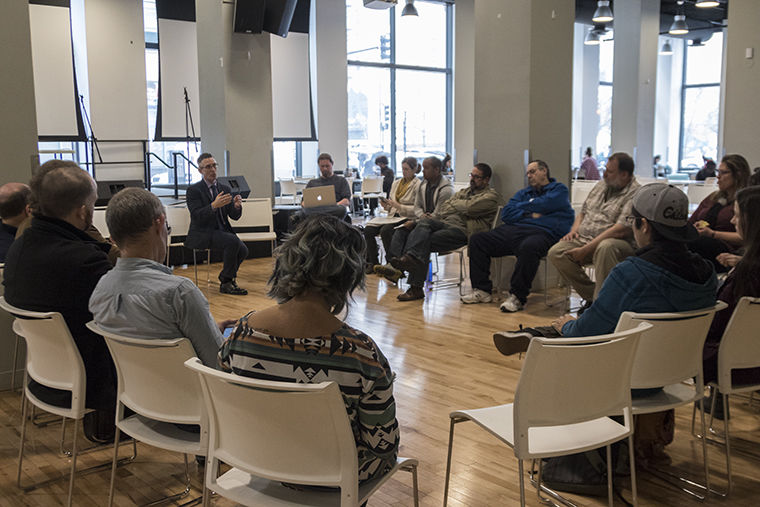 Approximately seven students shared their concerns with college administrators and faculty about the recently proposed department merges during a Feb. 21 student forum.

During a student forum for feedback on proposed departmental mergers, senior cinema art and science major Lorenzo Leyva questioned whether it would be beneficial to combine the Cinema Art and Science and Television departments.

“I acknowledge that TV is evolving into a more cinematic experience, but I know [cinema is] never going to be reading cue cards or filming things live to an audience,” Leyva said. “They seem very distinct in how they’re being run, and it doesn’t seem that there is much room for collaboration.”

Despite low attendance at the Feb. 21 forum, held at the Conaway Center in the 1104 S. Wabash Ave. Building, the few student attendees present expressed concerns about the proposed merger of the Television and Cinema Art and Science departments, including sharing equipment, possible restructuring of administrative positions and overall implementation.

As reported Feb. 20 by The Chronicle, proposals for departmental mergers were announced in an email sent earlier that month to students from Dean of the School of Media Arts Eric Freedman.

The mergers, which also include combining the Radio and Communication and Media Innovation departments, as well as the animation program with the Interactive Arts & Media Department, were proposed in response to student input regarding obstacles to interdisciplinary study, according to the email.

Student forums were scheduled for Feb. 21 and March 15 to get student feedback on the proposals, according to Freedman’s Feb. 14 email. The first event garnered a turnout of approximately seven students.

During the forum, Freedman—joined by affected department chairs and committee faculty members—said the proposals are meant to prevent students from being limited in their major pathways.

“The notion that you can operate [in] one particular discipline—that’s sort of a misnomer. We really need to be malleable [and] adaptive,” Freedman said during the forum. “That’s what we’re trying to create in this first vision of new structural models inside the School of Media Arts.”

In a Feb. 23 emailed statement from college spokeswoman Anjali Julka on behalf of Freedman regarding the student turnout, Julka said it is likely that students have been informed of the plans already from effective communication within the department.

“Some students have also reached out personally to answer more nuanced questions about their own courses of study,” the statement said. “We look forward to further discussing these plans at the next forum being held in March.”

Leyva said the forum’s low student turnout showed a lack of interest in something that seriously affects students.

“It’s embarrassing in a way because it’s affecting us,” Leyva said. “They sent an email to all of us and no one else showed up. It shows a lack of care, [and] it’s something that we should be concerned about.”

He asked Freedman what physical changes would be taking place during the mergers’ implementation. Freedman discussed the possibility of changing the location of equipment cages to better suit the needs of faculty and students.

After Leyva communicated concerns about sharing media equipment with the smaller Television Department, the department’s Chair Sharon Ross said she expects department staff to plan for that issue, but there is also a lot of unnecessary equipment that could be eliminated.

“One of the problems you have [with] separate equipment centers across campus is a lot of redundancy in equipment,” Ross said. “If you find redundancies, you can eliminate them and then reinvest [to] have enough going for the students.”

Marquise Davion, Student Government Association’s vice president of Finance and junior cinema art and science major, asked how the administrative structure would look if the proposals were to take place because it affects how student senators are positioned in SGA.

Freedman said the administrative structure has not yet been decided, but it is important to make sure everyone’s voices continue to be heard throughout the departments.

“We don’t want to create more administration, but we want to make sure the existing department of voices are represented,” Freedman said.

In response to whether it would be beneficial to combine the departments, Ross and other faculty members said the similarities between the departments were reasons to bring the two together, while Freedman pointed out what is being taught throughout the departments.

“The notion that television is all about reading off of cue cards is a limited perspective, and if that is all we’re doing, then we’re not doing everything [to address] where you need to be in terms of how television operates in this contemporary time,” Freedman said.

The are set to begin implementation in Fall 2017 but would not interrupt current students’ paths to graduation or lead to any programs being eliminated, as reported Feb. 20 by The Chronicle.

Freedman ended the forum by reiterating his purpose for the proposals: to give students the opportunity to explore other interests without being penalized.

On whether any programs or majors would potentially be phased out in the future, Freedman added that it would be unethical to make a statement on that at this moment because degree programs should always be evolving.

“We don’t want to make that judgment in any one instant, but we always want to be listening and not simply responding to a wayward trend,” Freedman said. “This is going to require ongoing conversation to make sure we understand, ‘What do [students] want to do?’”

Leyva said he thought the forum was beneficial, but his concerns about implementation remain.

“Anything can sound good when you talk about it in theory; it’s when you implement where it matters,” Leyva said.

He added that even though the mergers seem to be set in place, it is still good that students are being included in the process.

“It’s good that they at least care enough to ask us what we think about it,” Leyva said. “It at least let’s them think, ‘OK, well we didn’t think of these things, we didn’t bring up these concerns.’ So I appreciate that.”