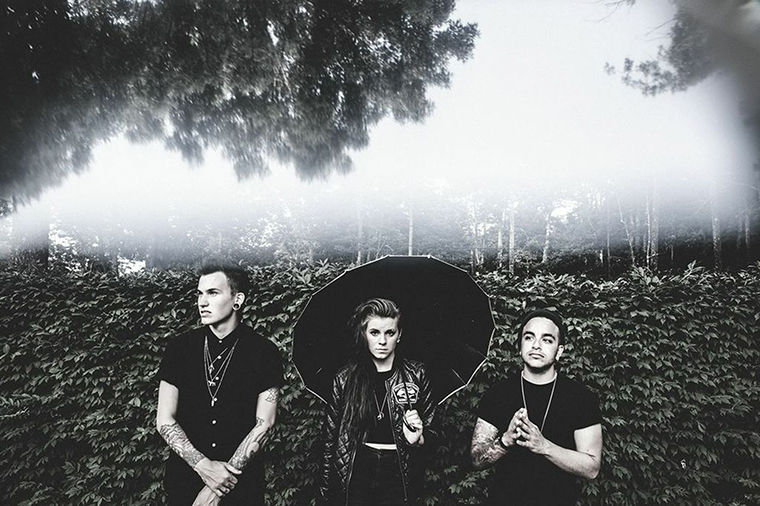 In late 2012, Lynn Gunnulfsen (vocals/guitar), Brad Griffin (drums), Alex Babinski (keyboard/guitar) and Brian MacDonald (keyboard/bass) came together to form PVRIS. The band released its self-titled EP in March 2013, which helped earn the band a spot on the Ernie Ball stage during the Vans Warped Tour that summer. Griffin parted ways with PVRIS at the end of the summer, but his departure did not stop the remaining trio from recording with Blake Harnage of the band Versa. The band released its acoustic EP on April 1, 2014, and spent the spring on tour before announcing in June that PVRIS had officially signed to Rise Records.

PVRIS released “St. Patrick” in late June 2014—the first single off the band’s debut album. The band started gaining attention in the alternative community for its transformed sound and haunting lyrics after the song’s release, and White Noise earned the No. 6 spot on Billboard’s Alternative Albums chart.

The Chronicle spoke with Gunnulfsen about the inspiration for White Noise, the band’s change in sound and how the album was received by fans.

THE CHRONICLE: Between signing to Rise Records and releasing your debut album, PVRIS had a crazy year in 2014. What has been the most surreal part for you so far?

LYNN GUNNULFSEN: The biggest thing of the year was putting our record out. Before we released it, it had been done for seven or eight months. We released it right around the time that we wanted to record it, so I think that was the biggest thing. If we didn’t release the record, all the other opportunities that have come up wouldn’t [have] happened.

Why did you decide to name the album White Noise?

LG: We had a really tough time naming the record. We knew we wanted something ghostly and paranormal because the whole record is themed around ghosts. We were so indecisive on names, and there was one day where we were like, “What if we take one of the songs from the record and name the record that.” So we thought White Noise was the most [suitable] because when I think of white noise, I think of TV static and electronics. I also think of paranormal stuff, so the two tied together are what the record is anyway. Our record has a lot of electronic influences, and the lyrical content is very ghost-themed and haunting in a way. The two of them tied together into White Noise.

What inspired the haunting sound for the record?

LG: I’m very into very dark and sad-sounding music in general, so that was immediately a no-brainer. But when we were making the record, I was going through a really tough time. Because I didn’t know where this feeling was coming from, it was like a ghost in a way and like I was being haunted by something. That just turned into the whole metaphor and the overall theme for the record—not letting your ghosts and demons get to you.

White Noise had a different sound than both of your EPs. What inspired you to take the album in a different direction stylistically?

LG: The change was a lot more gradual than people realize. Our first EP, which I kind of don’t want to talk about because we don’t want it to be talked about anymore—but even when we were recording that EP, I was recording electronic music on my computer. We were always hesitant to incorporate it into the music we were releasing. Eventually when we got to the studio with Blake [Harnage], he just gave us the confidence. Finally, we took the dive and released music with [electronic music] incorporated into it.

What was it like working on the album with Blake Harnage?

LG: It was awesome. He taught us so much and he’s such a weird, goofy dude. He has a very similar sense of humor as the rest of us, so we were always cracking jokes and being stupid. One crazy thing about him is that he works nocturnally, so we would wake up at 3 p.m. and work until 8 or 9 in the morning. It was really backwards, but it was fun because I feel like it got the best creativity out of us… one of the huge things he taught us was not to box ourselves in and don’t make the music people are expecting you to make. When you do that, the music will speak honestly.

White Noise has been out for a few months now. What has the response been like?