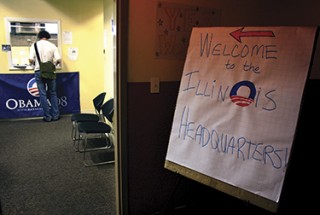 Sen. Barack Obama has seemingly become America’s media darling and the savior presidential candidate of our time. He is charged with fixing our country’s ailments after what many believe to be eight years of the Bush Administration’s failure. But, recent events hint that our political savior might have gotten a bit too big for his britches and that his political machine may be no different than the rest-past or present.

Recently, Chronicle Photo Editor Lenny Gilmore was given an assignment to photograph the new Chicago headquarters of the Obama campaign for the Sept. 29 issue. When he arrived on Sept. 26, he was not allowed to enter the office. No reason was given. He was simply told that he could not enter, with or without a camera. You may have noticed that the photo used with the story for the new Chicago Obama campaign headquarters was actually one taken from the hallway outside the office.

Photographers like Gilmore represent the backbone of college photography. When he is shunned by a political campaign, that disservice makes a statement about the campaign’s shift to bigger media attention. In effect, it says, “We got what we want from you, and we no longer need you.”

Then, on Oct. 21, newsrooms around the world were aghast with the news that the Obama campaign machine required media organizations to pay a ridiculously expensive access fee if they want a spot to cover the aptly named “Obamapalooza” on Election Day. The campaign, overwhelmed with money after raising a record $150 million in September, is asking from $410 to $1,870 depending on where the media outlet wants to be and if the outlet wants telephone or Internet service while in Grant Park. Media can still get in for free as long as the security machine vets them. However, they will have only the same type of access that non-journalists have.

Media agencies have been paying their own costs when traveling with candidates for a while; it just seems that the amounts are excessive and access is being sold to whoever can afford it. The access fees come very close to putting the event out of range of smaller media groups and college newspapers.

I understand that since Obama was propelled into the presidential spotlight he requires a greater degree of security. This is complicated by the fact that there are people in the world who would like to harm Obama based on the color of his skin.

However, Obama became indescribably popular through the hard work of ordinary, passionate people, and his campaign machine is now pushing them away. Many of his most dedicated supporters no longer have access to the campaign they helped build. These policy changes that shun college media and students are a strategic mistake that I feel will only serve to alienate the students that helped put him where he is today.