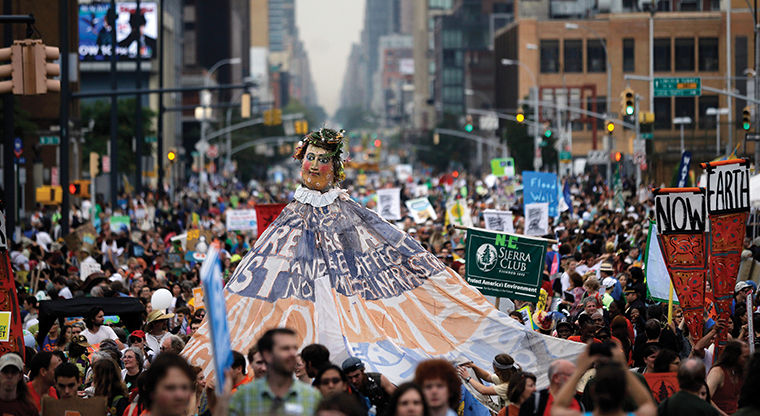 People fill the street during the People's Climate March, Sunday, Sept. 21, 2014, in New York. Tens of thousands of activists walked through Manhattan on Sunday, warning that climate change is destroying the Earth — in stride with demonstrators around the world who urged policymakers to take quick action. (AP Photo/Mel Evans)

Thirteen of the 14 warmest years on record have occurred in the 21st century, and each of the last three decades has seen a hotter temperature than the previous one, according to a statement from the World Meteorological Organization.

“Temperatures have been increasing over time,” said Jeffrey Dukes, associate professor of forestry, natural resources and biological science at Purdue University. “All of this is driven by increases in greenhouse gas concentrations in the atmosphere, which insulate the planet better.”

Dukes said an increased level of  carbon emissions and abundant greenhouse gas are partially absorbed into the ocean, making the water more acidic, which in turn makes it more difficult for aquatic life to survive.

Ecosystems at greater risk are colder, northern latitude environments in areas such as the Arctic, where the fastest average temperature gains on the planet have been seen. Alaska and alpine zones are inhabited by species that would not be able to leave, adapt or compete in order to survive, Dukes said.

According to NASA’s Key Indicators research on global climate change, the current level of carbon dioxide in the atmosphere is almost 1 1/3 times greater than the highest natural level seen thousands of years ago. This results in a climb in ground and atmospheric temperatures, the melting of land and Arctic sea ice, and rising sea levels.

Shamili Sandiford, a professor of biology and field studies at the College of DuPage in Glen Ellyn, Illinois, said looking at isolated weather events is not a proper indication of climate change.

While Obama spoke at the summit about increased carbon emissions and mentioned plans to create new standards and regulations on coal plants in the U.S., the major goal is to cut carbon emissions globally, a difficult challenge because many developing countries do not want to jeopardize their economic growth, Sandiford said.

“This kind of becomes the sticking point for countries like India and China, which have emerging economies that want to have a little bit of a break on their [environmental] contributions,” Sandiford said. “They’re at the point where the U.S. and Europe were 50 years ago.”

The ongoing industrialization movement only serves to aggravate carbon emissions, and unless countries begin to regulate them, they will continue to damage the environment, Dukes said.

“Fossil fuel burning is not showing signs, globally, of slowing down any time soon,” Dukes said.

Industrialization has historically played a significant role in higher fuel emissions, but increased awareness over the past 50 years has changed the way the world looks at the environment and collectively takes action.

Daniel Aldrich, an associate professor of political science at Purdue University, said environmental movements rely on policy changes, and many countries are listening to activists’ concerns.

According to Aldrich, policy work is being done at two levels to affect climate change.

“One is the federal government, where they can regulate things like miles per gallon that cars have to get or how energy efficient buildings should be,” he said. “More importantly at the local political level, for example within a state, there are a lot of interesting attempts [to change the way people do things].”

Citing examples, Aldrich mentioned Texas, home to the largest wind farm in the U.S., and Greensburg, Kansas, which has achieved its 100 percent renewable energy goal by using wind and solar energy while advocating less driving by promoting biking and walking.

DiCaprio, the newly appointed UN Messenger of Peace, spoke at the summit as a representative of the global community, urging more political action.

“Because the world’s scientific community has spoken and they have given us our prognosis, if we do not act together, we will surely perish,” DiCaprio said.