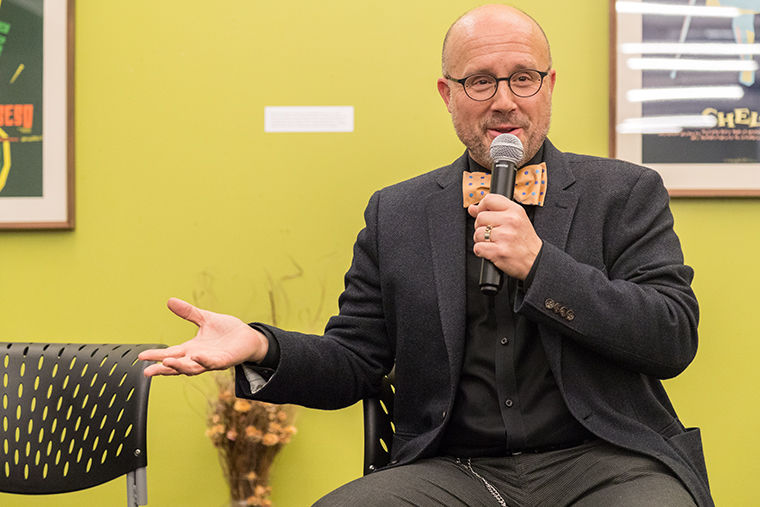 On the third floor of the Library, walls are lined with film posters from the 1950s and images of the Puerto Rican jibaros, inhabitants of the rural regions of Puerto Rico. Jibaros are one of the central topics discussed in Associate Professor in the Humanities, History and Social Sciences Department Carmelo Esterrich’s newly released book, “Concrete and Countryside: The Urban and the Rural in 1950s Puerto Rican Culture.”

Esterrich discussed his book during the Signature Showcase series at the Library, 624 S. Michigan Ave. Nov. 29. The program is designed to allow the college’s faculty to showcase their research and display their work, according to Kim Hale, head of community engagement and special initiatives in the Library.

“We would invite faculty we knew were publishing to come and talk about their work,” Hale said. “I knew [Esterrich] had a book that was coming out, and I’ve known Carmelo for many years, so I asked him if he would be interested in participating with us and he was very receptive of the idea.”

Esterrich’s book is about Puerto Rico in the 1950s when traditional rural and agricultural society was being rapidly industrialized, as introduced by Norman Alexandroff, communications coordinator for the Library.

“The island was politically divided with people wanting to seek independence from the U.S.,” Alexandroff said. “Those who were happy to see it annexed as the 51st state of the United States and others who wanted to embrace the commonwealth status but wanted more political, social and economic independence.”

Alexandroff said after reading the book, he and Esterrich sat down for about an hour or so and talked about issues addressed in his work.

“I had no idea about all of the history and culture of Puerto Rico that emerged in the 1950s. My assumption was that this had been around for hundreds of years or more and there was a clear sense of cultural identity on the island,” Alexandroff said. “When the effort to create a common cultural identity took root, the emphasis was on the Spanish cultural roots and deemphasizing the African and indigenous cultural roots, which I found really troubling.”

Esterrich said he did most of his research in Puerto Rico at the National Archives but also researched in New York at the Center for Puerto Rican Studies at Hunter College. He started writing the book in 2006 and finished in 2015. It then took three years to get it published, he added.

“It was a book that took a lot of research before I could develop the writing, so that took several years because I have a full-time job, and I could only go there on spring breaks, Christmas breaks and summer breaks,” Esterrich said. “I’m a slow writer, and in academic [publishing], the process is long.”

Esterrich said although the process took him 11 years to complete, he is very satisfied with the way it turned out and how it has been received by readers.

“I did a presentation in Humboldt Park about two weeks ago, and it was amazing. I had people in their 80s [tell] my mom, ‘Your son brought me back to my childhood,’” Esterrich said. “Yes, academics are going to enjoy it very much, but I am really pleased that regular people who are interested in Puerto Rico are buying and reading the book. That is incredibly satisfying.”